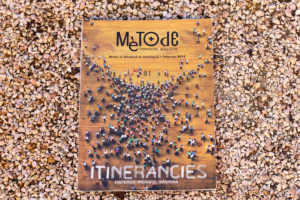 Domingo Pujante reflects on Mètode’s monograph Itinerancy (spring 2014) dedicated to the processes of human and animal mobility in the search of the best chances for survival and safety.

Review of different visions on the migratory phenomenon explored by Spanish cinema, from the 30s until the current day.

This paper investigates the cross-border migration of North European retirees to the Costa Blanca and its influence on the urban expansion of resorts. We also discuss the reasons for these migrations, which are mainly related to climate and lifestyle.

Border control policies have been strengthened, making Spain – and indeed Europe as whole – a kind of fortress that is becoming increasingly hard to enter and, consequently, to request asylum.

The Social Impact of Human Mobility

This article reflects on the social costs and benefits of human migrations, from the viewpoints of both migrating and host populations, and the people that comprise them.

The Genetics of Human Migration

In the animal kingdom, dispersal represents a critical decision as it affects survival and reproductive success, and is also an important component of population dynamics. This article looks at dispersal pattern variation in primates and some of the underlying reasons, both proximate and root causes. Keywords:

Should I Leave or Should I Stay?

Many factors influence dispersal decisions in animals. However, animals only disperse once they are physically fit enough to reach and settle in the new location successfully.