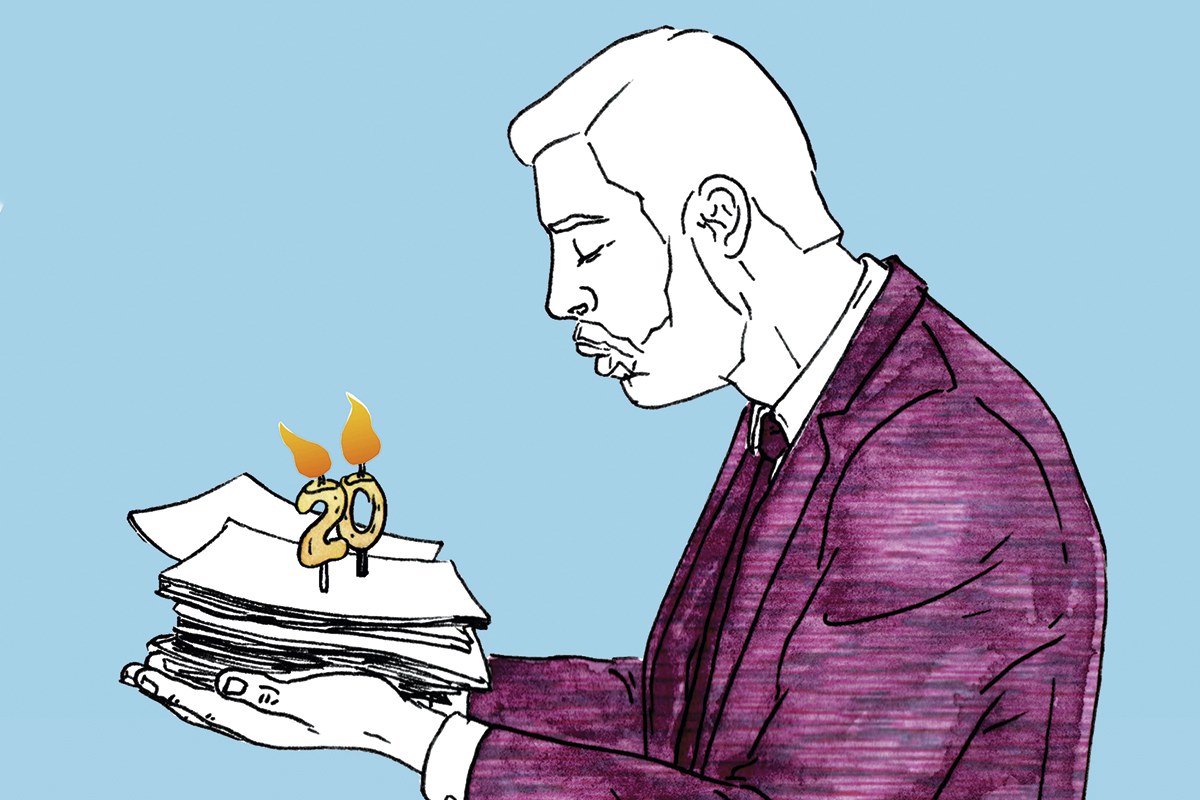 My career as a science communicator began on Monday 8 October 2001. On that day I was supposed to be packing my bags to move to France, but a series of fortunate and unforeseen coincidences resulted in a change of direction in my future. I have never told the story in detail. Here it goes:

In spring 2001, I was a twenty-something chemistry and biochemistry graduate who, after a year of research as a predoctoral student, impatient and disenchanted with day-to-day life in the lab, had left to work as an occupational risk prevention technician. The profession was in high demand at the time, but I felt I had rushed into it and tried to stay close to science, collaborating in local media and consuming a lot of popular science. The inescapable event for me was Eduard Punset’s TV programme Redes in Spanish television, which I recorded on VHS so that I would not have to wait for the broadcast at one o’clock in the morning (and so that I could pause, rewind, and take notes). If at that time, which I perceived as a transitional period, I had been asked where I wanted to work, I would have answered that I wanted to work as a science communicator for Redes. I was such a fan of the programme that one day in June 2001 my girlfriend at the time said to me: «Send them an e-mail offering to collaborate with them. Who knows.» After overcoming my modesty, I looked up the programme’s e-mail address on the website and wrote to them. Doing so prompted me to look for more options to return to science, and I applied for a pre-doctoral position at the University of Barcelona and for a Leonardo grant from the European Union, which would involve seven months at a research centre abroad.

«I opened my computer, I stared at my inbox and after a few seconds I told my office colleagues: “Eduard Punset has sent me an e-mail”»

No option seemed to move very fast, but one morning in mid-July, as I opened my computer, I stared at my inbox and after a few seconds I told my office colleagues: «Eduard Punset has sent me an e-mail». I have the only sentence in his message engraved in my mind: «Send us your résumé, we are looking for people to dedicate themselves to the public understanding of science». That same afternoon I polished my résumé, sent it off, and for the next few days I rushed to check my mailbox every time I arrived at the office (at that time we had no laptops or Internet connection on our mobile phones). But nothing. Well, yes, at the beginning of September I was awarded the Leonardo grant to go to Poitiers to do research in a plant biotechnology lab. I was due to start on 10 October. I looked at where it was on the map, asked for a leave of absence from the company where I worked and agreed to go to France with itch, curious to know what had happened with that e-mail sent to Punset.

Then I thought that the scholarship was a good excuse to send a follow-up message, something like «I wrote a few weeks ago, I have been given a scholarship to go to France, but if there is any possibility of joining your team, please do keep me in mind». This time the response was quicker. Someone named Marc from the production company Agencia Planetaria wrote to me explaining that they had no vacancies at the moment, but he suggested that I visit them one day to get to know them and that I should bring something I had made. I lived in Tortosa and we arranged to meet on Wednesday morning, 3 October, at their offices on La Rambla de Catalunya, Barcelona. From that day, I clearly remember walking up the stairs of the building, having the door opened for me by a guy younger than me but wearing a suit (that was Marc), and suddenly seeing some curly hair sitting in front of a window at the back. Whoops, it was Punset! My sympathetic nervous system went into overdrive. Not only was my idol there… but he stood up, called me by name and told everyone present that I was a biochemist, that I was going to France, but that I was very interested in science dissemination and that perhaps in the future I could join one of his projects. Punset had read my résumé! I was very excited. He asked me if I had brought anything with me, so I took out some cassettes with recordings of my collaborations on a local radio station and a couple of texts I had published in the weekly magazine L’Ebre, and he passed them on to Enrique Gracián, the editor of Redes at the time. He then said to me something as Punsetian as: «And now let’s go to bed». Thanks to the quick reaction of one of those present, I understood that we were in a small flat and there was a bed in the next room where they sat to talk when there were a lot of people in the room. There, Eduard asked me about me and told me that they were developing a project for which they would need documentary makers who knew about science. If the project was greenlighted, they would let me know; in the meantime, they told me, I should learn a lot in France. We got out of bed, he said goodbye, I saw him ask Enrique a subtle «is it good?» and I could hear «he can write», and he walked me to the door, thanking me for my visit. I forgot to eat that day. I did not run out of time, and I was hungry, but the evening came and I thought: «Wow, I have skipped lunch today». I do not know if you have ever had such an eye-opening day. For me, that was the only one. I was walking on a cloud.

But the story did not end there. On Friday morning, back in Tortosa, Marc called me and said: «Look, yesterday a member of the Redes team left unexpectedly and Punset told me to ask you if you would like to start working with us on Monday. I know it would mean cancelling the trip to France and moving to Barcelona unexpectedly. If you cannot accept now, we understand, and there may be opportunities in the future, because Eduard liked you, but we wanted to offer it to you. We would give you a three-month contract to see how it goes. Of course, we would need an answer from you this afternoon».

Wow, I still get emotional just thinking about it. I was stunned, but my doubts were short-lived. At midday I called Marc, apologised to the representatives of the Leonardo grant, and first thing in the morning on Monday 8 October I went up to the TVE studios in Sant Cugat with my now great friend Miriam Peláez, who introduced me to the rest of the team and explained the guest coordinator job I had to do. I consider that strange and disconcerting day twenty years ago as the beginning of my career as a science communicator. You have no idea how eager I was to learn quickly and do a good job. It was a dream. That same Friday, two sections of Redes were recorded on that legendary white set that I had seen so many times on TV, and I pinched myself thinking «What am I doing here». Sometimes I continue to wonder. If that boy, as enthusiastic as he was innocent and insecure, had been told that he would eventually direct and present his own programme on TVE, write four books of considerable success, live eight years in the United States, be awarded a scholarship for a whole year at MIT, talk about science every Sunday on a major show like A vivir on Cadena Ser, travel and give lectures in countless countries, and have published in media such as El País, National Geographic, Scientific American… and Mètode!… I would feel the luckiest man in the world. And that perspective is always with me. I am more of a forward-looking person, but I feel great satisfaction when I put the present into context, and so grateful to the people who, both personally and professionally, have accompanied me on this adventure. An adventure that, frankly, keeps getting more and more exciting.