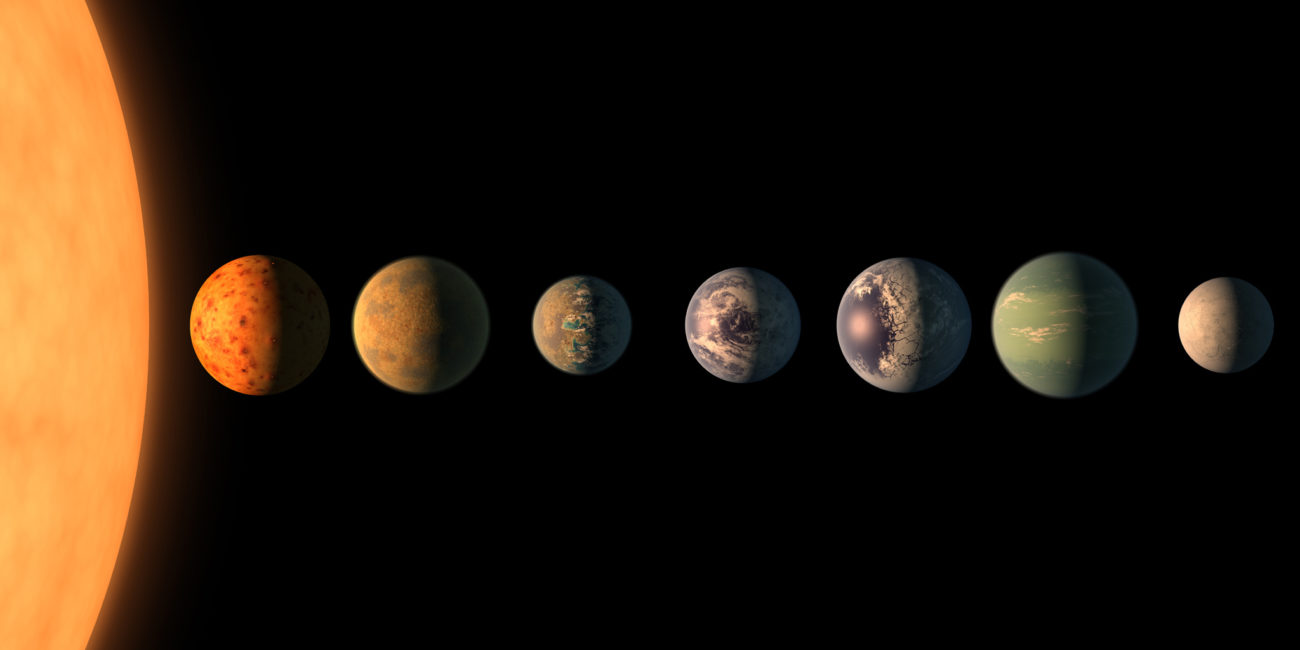 Before using conditionals and speculating, we need to set some bases. Let us start with the most basic: what is an exoplanet? In general terms, an exoplanet is any planet orbiting a star other than the Sun; that is, a planet that does not belong to our solar system. The reason why we are talking about planets thousands of light years from us is the discovery of the team led by the astronomer Michaël Gilon, from the University of Liège: the conditions of habitability of the Trappist-1 system. In this system, exoplanets orbit Trappist-1, an ultra-cold dwarf star approximately 39 light years away from us. Of the seven planets orbiting it, everything indicates that three fall within what is considered its habitable zone, that is, the ideal location for them to have liquid water on their surface.

The first exoplanet, Dimidium, was detected in 1992, but its existence was not confirmed until 1995 by Michel Mayor and Didier Queloz. After this fact, the number of extrasolar planets has only grown, and fast. Now, with more than 3,500 discovered exoplanets, is the term planet still appropriate to refer to what lies beyond Neptune? Experts do not think so. Fernando Ballesteros, head of instrumentation of the Astronomical Observatory of the University of Valencia, thinks that the definition of planet should be based exclusively on what they are made of, rather than the body they orbit. On the other hand, David Barrado, researcher at the Centre of Astrobiology of the National Institute of Aerospace Technology (INTA) and the Spanish National Research Council (CSIC), believes that «the definition is pretty functional» for the moment.

Recreation of the surface of a planet in the Trappist-1 system. / Picture: NASA – JPL-Caltech

In recent years, extraterrestrial life has been a speculation that goes far beyond what we have seen in science-fiction films. Experts say a number of conditions are necessary for that to happen: liquid water is the constant. Three of the Trappist-1 planets lie in the so-called habitable zone, which would allow them, in principle, to have liquid water. That is to say, those three exoplanets – Trappist-1E, Trappist-1F and Trappist-1G – are sufficiently close to the star to possibly have liquid oceans, provided that they have an atmosphere.

«The habitable zone depends essentially on the mass and age of the star. Different factors could expand the zone, but geological activity is fundamental for the development of life», David Barrado says.

Despite this hope, experts think a space race to find life is unlikely. Fernando Ballesteros thinks that «the systems around a red dwarf need to be very close in order to have water. This would cause a gravitational anchoring, that is, the planets would always show the same side to the star, and having a normal temperature would be difficult, since the distribution would be uneven.

Astrophysics communication: the power of NASA

Behind all the different profiles of the people working at NASA, there was a communication team that managed to appropriate the discovery, in which they were only mere participants. The team of researchers that made the discovery was led by Michaël Gillon, from the Institute of Astrophysics and Geophysics of the University of Liège in Belgium. The media did not go beyond the data provided by the NASA during the press conference. Headlines like «NASA discovers…» were common the day after the discovery of the habitable zone of Trappist-1 was announced.

David Barrado reflects on NASA’s international prestige and million-dollar communication campaigns. The astronomer says that is not the case in Europe. The University of Liège merely organised a press conference on the topic, although much earlier, in May 2016, they had already talked about Trappist-1 on their website (a communication that had no general media coverage).

«NASA often creates unreal expectations. That is why some of us are tired of this communication model and end up doing nothing»

Fernando Ballesteros thinks this has to do with communication policy and with legal issues of the European Southern Observatory (ESO) and, in general, with the communication problems of European scientists. «NASA often creates unreal expectations, as happened with the news about arsenic, which had nothing to do with the real discovery. That is why some of us are tired of this communication model and end up doing nothing». Barrado agrees, but adds that «journalists are also involved in this». According to the astronomer: «The media pay attention only to a single source, the NASA, and forget the rest. Depersonalising Gillon’s team into the term researchers distances them from society and makes them be seen as independent from it».

Graduate in Journalism and student of the Master’s Degree in History of Science and Scientific Communication of the University of Valencia.