What does each newspaper think of nuclear energy? 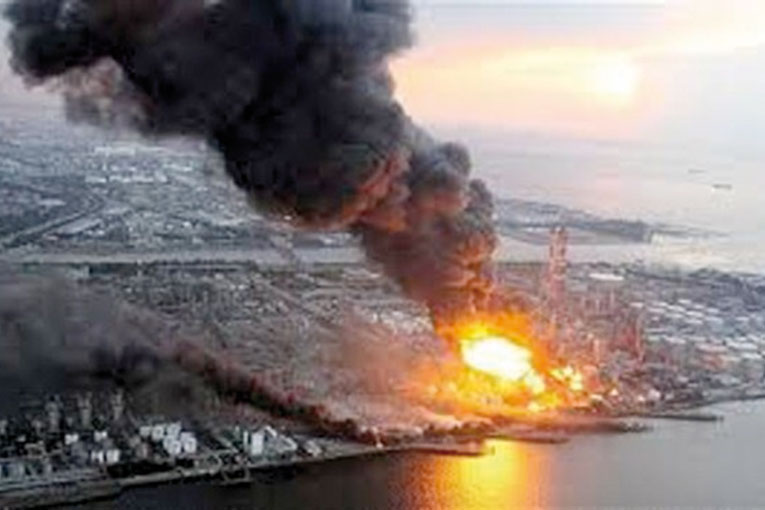 The study reported here sets out to explore the different ideological stances taken by several Spanish newspapers and the opinions proffered, to see whether there was scientific debate about nuclear energy in the popular Spanish press. To do so, we have analysed the opinion columns of the following national newspapers: El País, El Mundo, La Razón, ABC, La Vanguardia and Público. The opinion articles published illustrate the standpoint taken by each newspaper on nuclear power, and the arguments they implement to support this view. Likewise, the study reveals whether scientific or environmental arguments were to be found in these columns.

«There was very little talk in the Spanish press of the consequences a serious nuclear accident would have on the natural environment. The most frequent argument concerned energy alternatives»

Few scientific arguments were present in the texts analysed and, when found, were linked to environmental issues, chiefly related to topics like climate change, energy policy and renewable energy sources, and power supply problems. Sometimes these arguments were even exploited to justify the use of nuclear energy, as in the following article by the Director of Economics and Public Policy of the Spanish think tank FAES (Fundación para el Análisis y los Estudios Sociales, linked to the conservative party, Partido Popular) published in La Rázon:

Electricity of nuclear origin is free of CO2 emissions. Its replacement by combined cycle gas turbines, even though they may provide lower environmental effects than coal, would imply additional annual emissions of 22 million tons of CO2, which is equivalent to the emissions of around a quarter of the Spanish vehicle fleet. To secure prosperity and welfare, Spanish people should appreciate what nuclear energy actually provides, assume and manage the risks properly.

Despite this, there was very little talk of the consequences the natural environment would suffer in the event of a serious nuclear accident. The most frequent discussion focused on energy alternatives. In this respect, the article by biologist and socio-ecologist, Ramon Folch, was one of the items that appealed most to the readers’ conscience. Folch stated that not only should we consider changing our energy production model but also our energy consumption model. From his platform he warned the public, unwilling to give up their current standard of living, that:

The closure of seven [German] plants will be made up for by coal-fired thermal power stations. Thus we are witnessing a new controversy. There will be no way out if we keep focusing on supply and overlook demand. It is simpler to attack the power plants instead of consumer insatiability, but unless we control demand there is nothing we can do. […] Having everything as well as not emitting CO2 is impossible. How much would we deprive ourselves, at what risk and with what emission levels? That is the compelling three-sided question. Without a reasonable answer, it is all just fantasy.

Another possible consequence of the accident in question concerned public safety, or how people could be affected by a large-scale nuclear accident. Another issue touched on was the service life of power plants. But all these topics were primarily addressed from an economic viewpoint, looking at the benefits provided by the fact that these are still in operation: profits for the industrialist who runs the power station and benefits for the user, who does not have to face a price rise for electrical energy.

Therefore, there was a lack of debate on information about the power that nuclear energy actually provides, energy requirements of the Spanish state, real alternatives, the serious problems posed by radioactive waste, etc. These subjects held no place in the nuclear debate in the Spanish press. Almost all the news items analysed discussed arguments of the economic, political or social kind.

The stance adopted by the editorials

Despite the great relevance of the accident at the Fukushima power plant, some papers openly criticised the limited news about the victims of the earthquake and subsequent tsunami. Both La Rázon and ABC reiterated in both their editorials and opinion columns that not enough attention was being paid to the human tragedy and that all the media attention was focussing on the nuclear catastrophe. This was patently stated by Paco Reyero, reporter for La Razón and participant on Onda Cero radio station:

The first 10,000 dead from the tsunami have been underrated by news coverage, appearing distorted and -due to greater nuclear alarm- arousing the same compassion they did when living Tokyo: none at all.

Following this line of argument, some writers like Juan Roldán understated the accident, calling it «the least of Japanese disasters». While the earthquake and tsunami in Japan unleashed a real tragedy in human terms, statements of this kind clearly demonstrated the media’s reluctance to make an in-depth analysis of the risks of nuclear energy and a desire to underrate or limit the consequences of the accident:

The Japanese have to live with 20,000 deaths caused by the earthquake and tsunami and hundreds of thousands of missing people, who will never be found. The power plant is the least of their problems, and that is very difficult for us to imagine.

This was also the most frequently repeated argument in ABC’s editorial, declaring that at the time the media paid more attention to what might happen to the nuclear plant than to the disaster itself, in other words, the consequences in terms of victims of the earthquake and tsunami. This was highlighted in the editorial published on March 18:

[…] infinitely more attention is being paid to what may happen in the Fukushima nuclear power plant than to the certain and very real drama of the devastation wreaked by the tsunami, with over 6,000 dead and 10,000 missing.

There was also room for criticism targeting the government and how it was handling the Japanese disaster. The most frequently repeated observation in the editorials of La Rázon concerned the lack of temperance Western governments had shown towards the Fukushima accident. Angela Merkel was openly criticised for her decision to close down some of Germany’s nuclear power plants:

Some Western governments have entered, however, a spiral of confusion and precipitation, far from the temperance expected, on being faced with a crisis taking place thousands of miles away, and under circumstances whose repetition is almost impossible on the old continent. 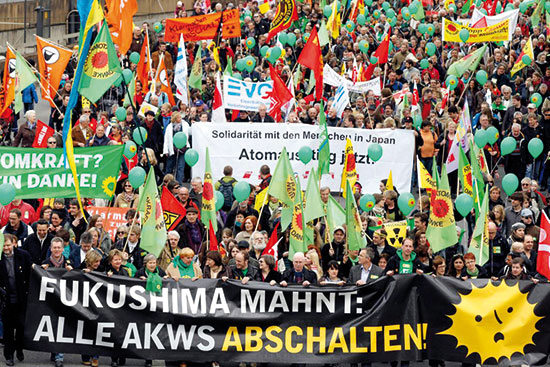 The [Japanese] Government, however, appears to have fallen short of the exemplary attitude of its citizens: it has been slow to react, confusing public information and has lacked sufficient leadership.

The only editorial on this topic to appear in El Mundo criticised how the Fukushima accident was handled. It sharply attacked the statements made by the European Commissioner for Energy, Günther Oettinger, who described the Fukushima accident as apocalyptic. Thus, El Mundo urged the authorities to keep calm and not be swayed by their initial impulses:

We are crazy. When serenity is called for, politicians and the mass media seem set on alarming the public. The European Commissioner for Energy, a German with electoral concerns for the future of his party, speaks of the «apocalypse in Japan»…

The newspaper ABC criticised all proponents of the non-use or reduction of nuclear energy. This line of argument, both biased and partial, was used to justify Antonio Burgos’ pronouncement on environmentalists, whom he accused of not having «a clue» (and even compared them with ETA terrorists, morally speaking):

Not even ETA, when it murdered engineers to prevent the Lemóniz power plant from opening, displayed as much zeal as the antinuclear fury that has gripped Europe, with Merkel at the helm. We will not have it! Nuclear power is fascist, and we must terminate it. […] Rather than nuclear power, I would ban this tidal wave of liberal environmentalists, who have not got a clue but who pose as experts, and the electricity bill they would produce.

With these statements, Antonio Burgos, a column writer who is emblematic of the Spanish rightwing, undermined the authority of environmental discourse and those experts who are openly opposed to nuclear energy. What is more, he brought the issue of electricity prices to the foreground, an issue having a direct impact on the reader, in an era marked by economic crisis. Moreover, this columnist questioned the criticism of nuclear energy by reducing it to a purely ideological question, describing environmentalists’ objections as a reaction against «fascist» energy, as he branded it ironically.

For or against nuclear energy?

On analysing the articles on Fukushima in these six dailies, one reaches the conclusion that, generally speaking, the Spanish press tended to defend nuclear power. They based this stance on economic arguments, relegating scientific and environmental issues to a secondary position. Notwithstanding, the intensity of this support for nuclear energy varied depending on the ideology of each newspaper analysed.

«There was a lack of debate on information about the resources that nuclear energy actually provides, energy requirements of the Spanish state, real alternatives or the serious problems posed by radioactive waste»

Thus, conservative newspapers like ABC and La Razón, were more openly in favour of nuclear energy, while La Vanguardia, El Mundo and El País, despite differences in their editorials, did not support abandoning this type of energy. Nevertheless, the last three papers endeavoured to open a debate on nuclear energy and its alternatives.

Depending on each paper, the support shown for nuclear energy was more subtle or more direct. Surprisingly, El País was one of the newspapers to show most support for nuclear energy. One of the newspapers reflecting the widest variety of views was El Mundo, which together with La Vanguardia, presented certain bi-directionality of their contributions. The opposite extreme was Público, which published an editorial that was openly against the use of nuclear energy, and saw the case of Fukushima as a good opportunity to reopen this debate among its readership. It was the only paper analysed that took a clear stance against this type of energy source citing, as its main argument, the possibility of an accident that would prove too dangerous to handle.

After analysing these six newspapers, one can conclude that an event like the accident at the Fukushima nuclear power station aroused great interest among Spanish society. Proof of this was the large number of columns and editorials devoted to the subject during the month following the earthquake, apart from all the other coverage that fell outside the scope of this study. An issue that far from being closed, even today –more than a year after the accident– continues to give rise to articles, stir up opinion, and raise an interesting and necessary debate. 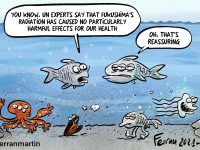 HOW TO CITE THIS ARTICLE:
García Mestres, M., Mateu, A., & Domínguez, M. (2013). Fukushima in the Spanish Press. What does each newspaper think of nuclear energy?. Mètode Science Studies Journal, 3.
We use cookies on our website to give you the most relevant experience by remembering your preferences and repeat visits. By clicking “Accept All”, you consent to the use of ALL the cookies. However, you may visit "Cookie Settings" to provide a controlled consent. Read more
Cookie SettingsRejectAccept All
Manage consent