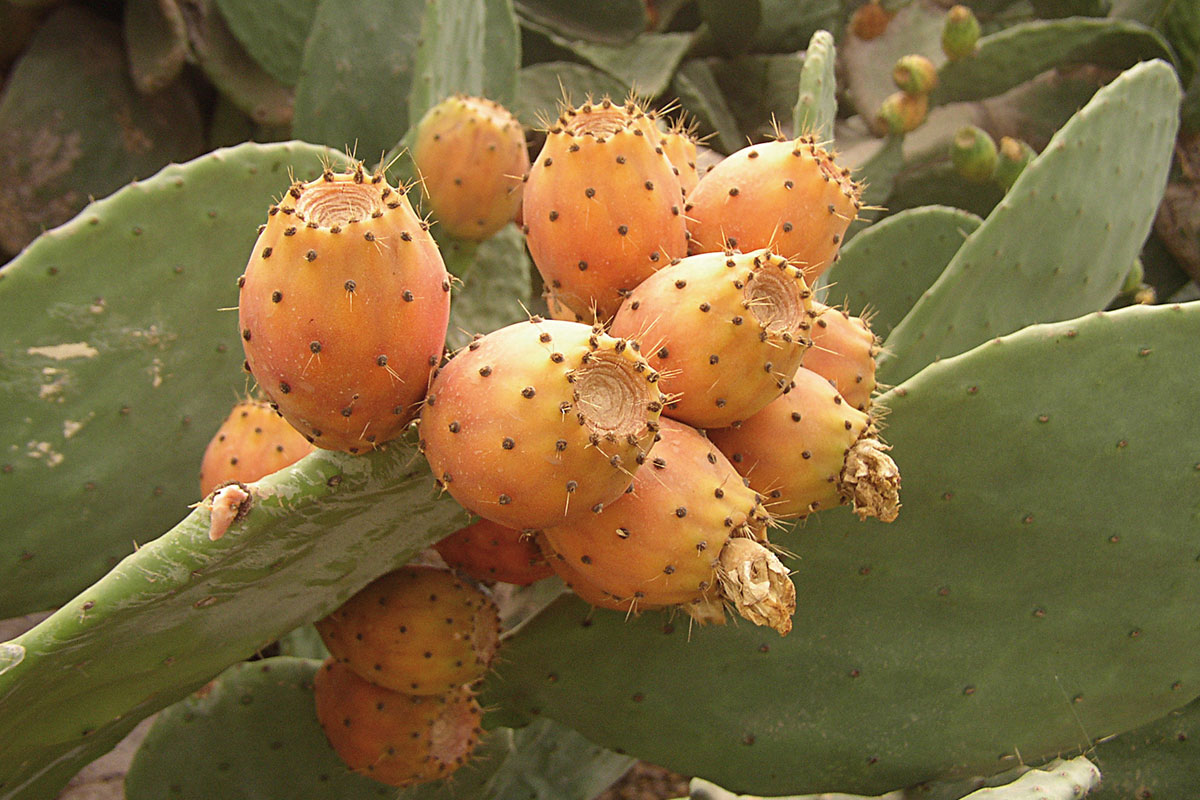 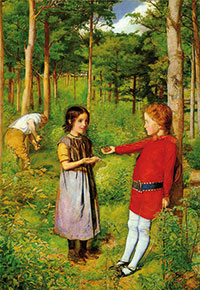 The abandonment of rural areas and the interruption of intergenerational oral transmission have created a physical, emotional and affective separation from that world of nature, to the extent that young people still living in the countryside have lost wild plants as a cultural referent, as part of the collective imaginary, and they rarely identify them as pleasing and free sources of food, games, rituals or symbolism. Since the middle of the last century, we witnessed a sort of progressive emptying of collective memory concerning what we call childhood ethnobotany: the relationship with plants during childhood and adolescence, a relationship we do not have as adults anymore. And when we manage to rescue the old relationship with plants from the deepest reservoirs of our memory we understand that childhood ethnobotany is already almost gone. Ethnobotany was versatile, included everything from food to games, from hunting tools to musical instruments, from rites of passage to the manufacture of decorations.

Nevertheless, being a stage rather than a permanent situation, very few people have analysed ethnobotanical behaviour. This raises a methodological problem: can childhood ethnobotany be studied with today’s children? Although the answer is no, we can still find informants, that is, paradoxically, ourselves. Our generation was maybe the last ethnobotanically active. And we have to notice, when trying to set these memories in order to pass them on for the future, that they will offer a testimony loaded with emotional components bordering with nostalgia for the loss of an idealized world, childhood.

In the Western European world of the past thirty years, food needs have been met for every stage in life. Besides, food is conveniently selected, controlled, packaged, labelled and pleasantly presented. But it has not always been so. In the past there were frequent cases of hardship to the point of starvation, and the relationship with wild plants reached significance for adults and, even more, for children, in rural areas.

In fact, children have tried everything that is susceptible to be eaten, licked, chewed, sucked or gobbled. One way or another, the sharp eye of a hungry child, the precise fingers of boy who needs dietary supplements, the greedy jaws, eager of action, or the bold thoughtlessness, encouraged by the rumble of their gut, leading them to find resources in the plant world whose energy balance would not be advisable for adults. Moving a large body for a few grams of the pulp of a small or inaccessible fruit can be inefficient and represents a prohibitive energy expenditure; conversely, the same fruit can provide enough power to a small and growing body that needs also a broader variety of components than the so often boring adult diet.

«Since the middle of the last century, we witnessed a sort of progressive emptying of collective memory concerning what we call childhood ethnobotany: the relationship with plants during childhood and adolescence»

It may be touching to reencounter, as adults, some of the flavours of our palatal, gustatory and aromatic universe. A universe that fed on an atavistic hunger that encourages the access to fruits and seeds despised by adults; and also to inflorescences, petals and the nectar of certain flowers; and to roots, rhizomes and bulbs; and to stems, gills and exudates. To study the relationship of children and early youths with plants has a fundamental chapter in gastronomy. Gastronomy not only meaning nutritional, because it includes the chemical-caloric value and the contribution of essential molecules, but also the sweet component of pleasurable satisfaction, the creation of endorphins and the affective connection to an environment that provides organoleptic incentives. Therefore, rather than gastronomy we should talk about gastrosophy: of knowledge, feelings and pleasures that we associate with what we eat; of how these foods have been used over time and space; of the underlying biochemical and physiological causes; and of allusive literary and pictorial sources. 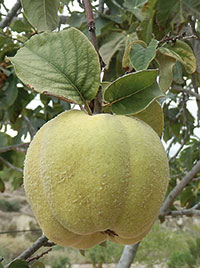 Daniel Climent
Gangs of kids played throwing quinces at each other.

The large, ripe fruit, as treasured as it is tantalizing, is the most watched by those who have devoted hours of enthusiastic work; while it is, at the same time, the most coveted by hordes of children in all latitudes during times of hardship. The gatherer impulse of children swooped down over apples or pears in rather cold regions, and over the more varied offer of warmer regions, with the same eagerness. And gangs of hungry kids, early notaries of the geography and phenology of the region, knew precisely where and when the first representatives of each crop species were ripe enough to be taken.

Long-lived figs or ephemeral apricots; acidulous tangerines or sweet carob pods; velvety peaches, waxy plums or shiny cherries; crispy jujubes or immodest pomegranates that offered their ruddy, pearl capsules… Everything was permitted to climb the tree and compete with birds, who were also eager to try the first concentrated sugar under the smooth skins of spring, summer and autumn fruit.

Albeit with fruits such as the bristly prickly pear (Opuntia ficus-indica) they had to be careful, not only because of the large thorns located on the areolas or pads, but because of the smaller ones or glochidia, which are released when the wind blows and the reason why one should not be downwind if we does not want to end bristling with very fine, almost invisible prickles, very difficult to remove from the skin of the unaware child. Once caught, stripped of all the thorns and conveniently peeled, they were a highly regarded snack, to the point of being sold on the streets, as portrayed in the following popular song from Cocentaina – a song with a clear double meaning: 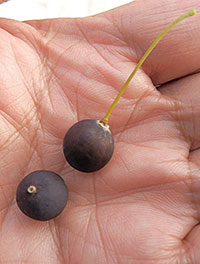 Daniel Climent
Once chewed, the carob pod offers a pit that could be used as ammunition for the children’s blowpipes.

The summer mulberry (Morus sp.), both the tasteless white mulberry (Morus alba) and the precious, large and abundant black mulberry (M. nigra) were the object of the children’s attention; they are rich in malic acid, glucose and fructose and have an intense, fresh and bittersweet taste. Blackberries, the infructescences of intricate brambles (Rubus ulmifolius), are sweet, with a mild flavour and faintly acid shades, but – alas! – they often require a toll in the form of scratches on skin or L-shaped tears on clothing, because they are defended by piercing thorns. All blackberries shared the same problem: they stained our clothes indelibly due to the anthocyanins they contain; it was impossible to remove those stains, so we took a scolding or a spanking from a legitimately angry mother. Oh dear, and they now say that anthocyanins are so healthy!

However, if crops were well protected, the hungry urchins entertained themselves in the dogged pursuit of another kind of inaccessible fruit, trees or wild shrubs, isolated or abandoned, which often meant nourishment apart from play; as well as others that were still green, acid, rough or held scarcely any pulp.

«It may be touching to reencounter, as adults, some of the flavours of our palatal, gustatory and aromatic universe»

Fruit to eat and play

At the end of the summer in the south of Valencia, quinces were very sought, especially in their maliformis variety, smaller, sweeter and rounder than the common quince (Cydonia oblonga). On the coast of southern Valencia (Santa Pola, Guardamar, Torrevieja), quinces, apple-shaped and with a soft velvety skin, were not only eaten where they were gathered, but also used by kids to train their psychomotor dynamics while bathing; and, throwing them at each other, they were drenched with the eventual fall in the sea, which favoured the fruit softening and decreased the roughness of tannins remaining in him.

Sometimes the tree that offered its fruit was much higher. This is the case of the nettle tree («hackberry», Celtis australis), producer of huge amounts of berries, drupes with very little flesh, slightly floury and sweet; when the mesocarp is chewed, the fruit exposes a spherical pit that was used as a pellet for cane blowpipes, or to annoy the teacher who tried to teach something relevant when he was facing the blackboard, his back to the audience. Such a treasure, edible and fun, was coveted by kids to the point that some tree owners charged by the hour for the permission to climb the hackberry and fill their pockets. The fruit has inspired popular proverbs. An example of this is the riddle from Mallorca «What is the tree with the fruit that is smaller than a chickpea? First it is green, then it is yellow and finally like charcoal.» Well, we have our answer: the hackberry.

[Full article in Catalan and Spanish.] 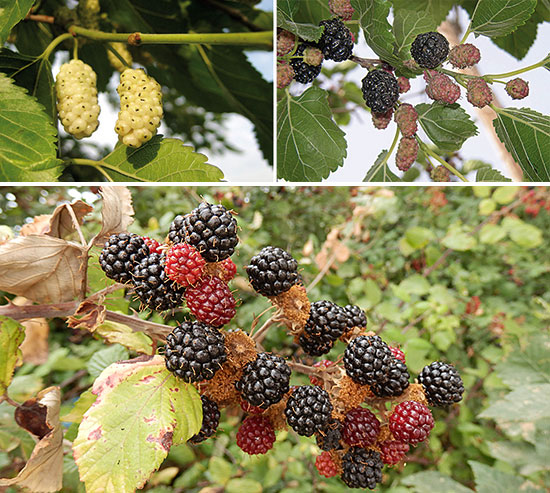 Emili Laguna / Daniel Climent
Above, summer mulberries (Morus nigra), with their intense, fresh, bittersweet flavour, the objective of the children’s attention. also blackberries (Rubus ulmifolius), below, which had the inconvenience of being protected by thorns. 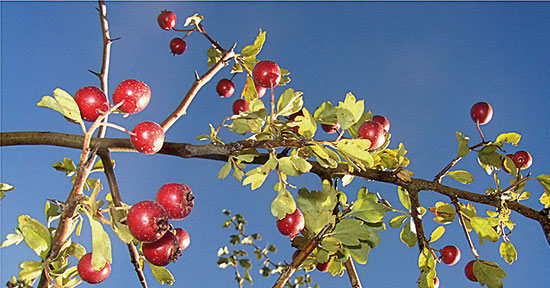 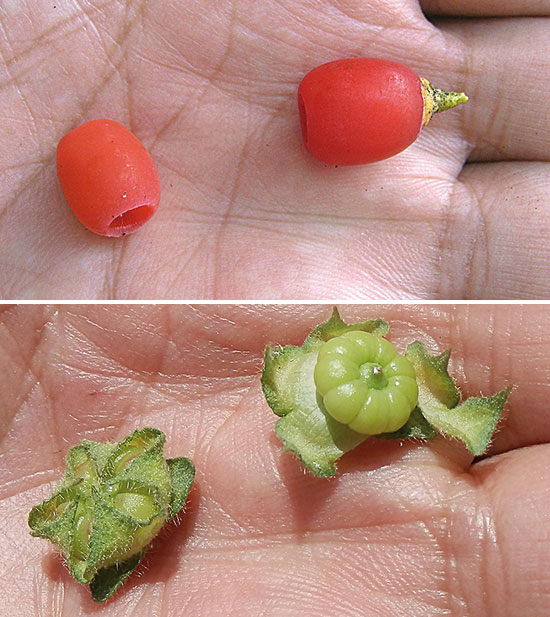 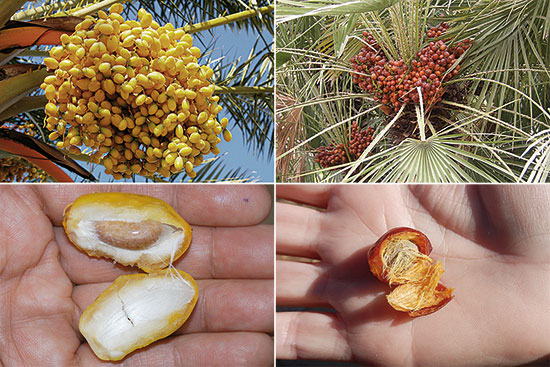 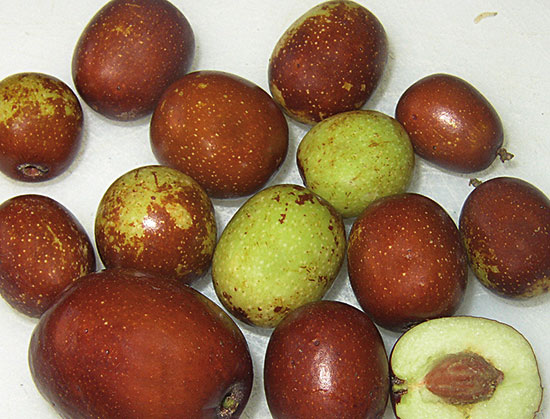 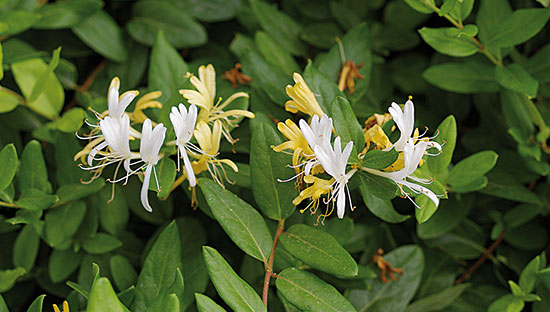 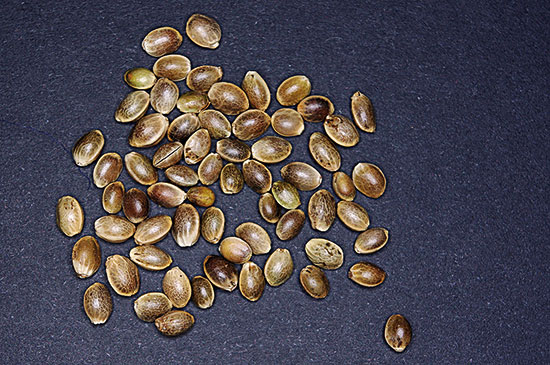 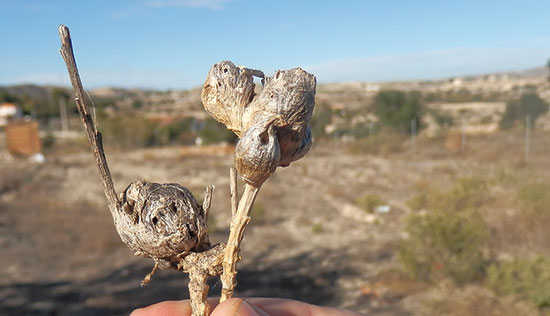 1. «When I was a little girl,/ I earned a lot of money:/ I sold prickly pears/ on the streets and on the square./ Of a dozen prickly pears/ one day only one was left,/ a gentleman with a cape/ wanted to buy it from me./ Mister, come to my house,/ and I will give it to you/ and if you are afraid of thorns/ I will peel it off for you» (Go back)

Professor of Ecology at the Department of Marine Sciences and Applied Biology. University of Alacant. 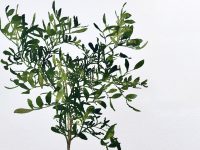