Linguist at the University of Bergamo, researcher on specialised discours 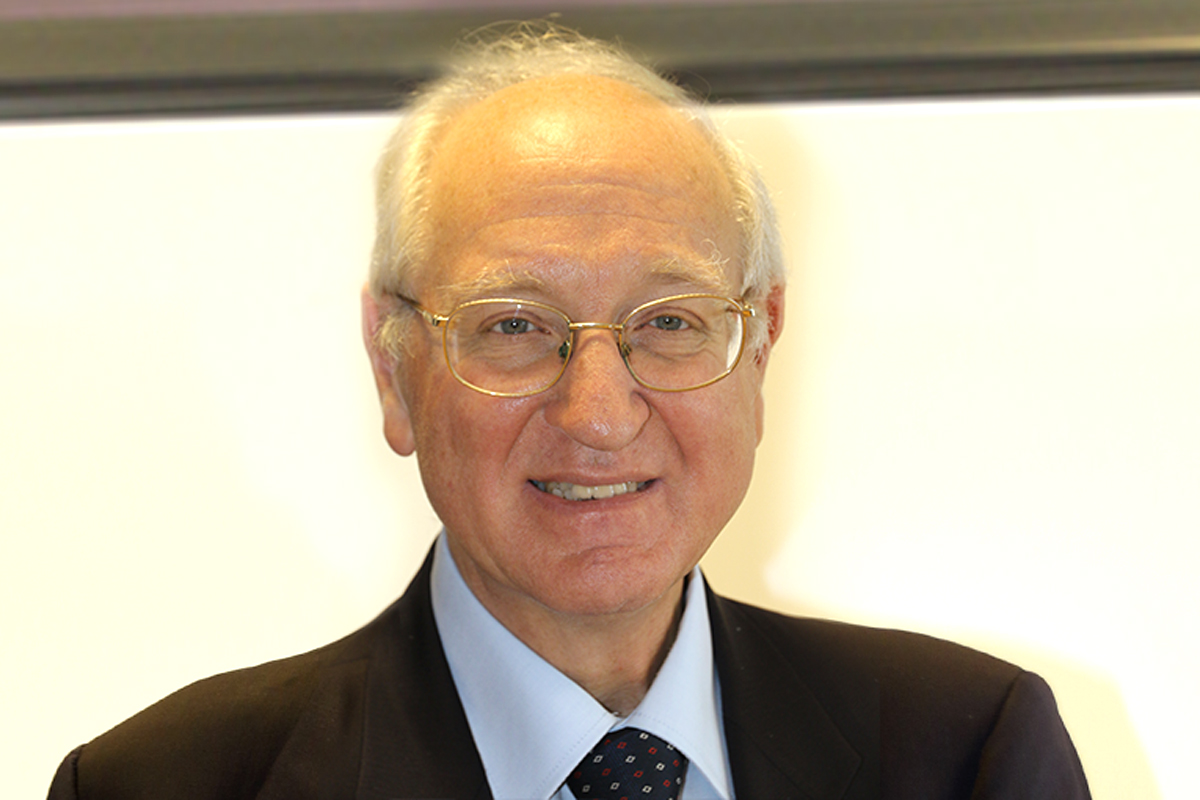 Maurizio Gotti is the Head of the Department of Foreign Languages, Literatures and Communication Studies of the University of Bergamo (Italy). One of his areas of study is specialised language, with works on the matter like Robert Boyle and the language of science (Guerini, 1996), Advances in medical discourse analysis: oral and written contexts, published with Françoise Salager-Meyer (Peter Lang, 2006) or Insights into academic genres, together with Carol Berkenkotter and Vijay Bhatia (Peter Lang, 2012). Recently, Maurizio Gotti participated in a seminar in the Universitat Jaume I in Castellón devoted to health context, where Mètode took the opportunity to talk to him. To accompany issue 86 of the journal, devoted to the rhetoric of science, we publish the conversation.

What are the characteristics of specialised discourse? Why is it important to study it?
This field has become more and more popular in linguistics because of the expectations of students and the role of languages in the world. Now many people, of course, are interested in studying languages for cultural purposes or for literary purposes, but more and more people are learning it because they want to use it for their profession. That’s why in the last twenty years they are trained towards studying specialised discourse, whilst first [they were trained] towards pedagogy, that is, in order to teach them the kind of language they needed. But then, apart from this, since we are university professors, we start investigating about texts themselves and very interesting aspects came out. In my field, for example, the role of English as a lingua franca, particularly the role of English for research. And so we started having greater and greater interest and greater and greater contact with experts about publications in English, which has become an important aspect for people not living in Anglo-Saxon countries. So now many, many countries you have [to speak English] to also be able to publish. And then the second is that which concerns new media, the fact you have new media, therefore there are also new forms of communication, so specialists are also turning to us because they see that they are not prepared to meet the needs of the new media. This has brought about a new train that is interdisciplinarity. You cannot do this kind of work by just looking at the text but not knowing what the community does, what the community thinks.

You have spoken about new media. How does it change the patient-doctor relationship?
Well, as I said before, a patient has become more autonomous on the one hand in getting information, in getting expertise, in trying to find answers to his or her problems and sometimes also in the evolution of communication there were mistakes, there were problems in the medical field, so we can debate the role of super-expert or the professional. People have become even more critical. They expect better things and so this has changed the role of patients and the doctors themselves. And the doctors should be aware that they are no longer privileged, on an ivory tower, but they are within a community that sees their role more and more, particularly if they work in the state service, they are part of the national service. They are not for personal profit but for the community interests.

What is the role of the specialised discourse in the creation and consolidation of a new discipline?
It is very important. Genre and language is not static, is dynamic, and keeps changing according to the needs of the people. If you have new ideas, a new epistemology, you also need new forms of communicating. That is why we have had evolutions. Who writes a dialogue nowadays? Galileo wrote a dialogue on the great systems. You either write an article or you write a book or you write a blog, you write an email, but you have different forms. And different forms got their reason out of necessity, out of evolution. Also technological, because we could not expect now to find emails or blogs if we didn’t have Internet or if we didn’t have computers. 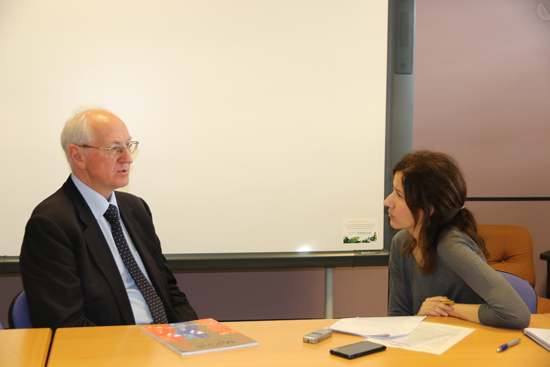 You mentioned Galileo. Do you think that science now needs more popularising «Galileos»? He wrote using his own language.
This is fascinating. Many of these people were not just writing on their own language, but they were also aware and they had lots of metatextual comments. I could learn something just by seeing what Boyle was writing, what Newton was writing. A new approach was that you have to say things as you perceive them. Many times they just saw things but they could not explain and they reflected what they saw in their writings. Very often they were conscious that they were inventing new things, not only the instruments to observe the moon, etc., but also the way of talking to others, there was another sort of preparation and these were people who had a wider interest in many sciences. Take Boyle, he wrote about vacuum, but also about language and about religion. They did not call themselves scientists at the time. They called themselves philosophers. So they had a different approach. We start having science in the nineteen century when we really have the specialisation. But at that time, they were just observing anything. Now that not could be possible. You can do that perhaps at the end of your career, when you somehow have a broader view, but when you start you are focusing on one single aspect, one single illness, and you work for twenty years on that illness trying to explain. You work on cancer and you devote your life to cancer.

Scientific knowledge is increasingly complex nowadays. Is it more complicated now to communicate about science?
Yes, it has become more difficult and it has brought about the spread or the arise of subdisciplines. And subdisciplines also bring together different journals. One of the consequences now is, for example, that you cannot actually read the whole literature. So you rely more text aids such as abstracts, summaries, which did not exist before; that is, you try to be informed in a very short way. You have to be very, very selective. Of course, now we have these technologies that can help us. For example, with Google you just put a word and have millions of things come up.

Popularisation implies, to a certain extent, simplifying and renouncing to the accuracy of the concepts, yet scientists understand the need to achieve a wider audience. How can they combine this two point of views?
Popularisation has become very, very widespread nowadays because there are some issues such as technology, such as medicine, environment, economics, that are so relevant for people. In the past, people could just live without this knowing these things. Now it seems like their lives are strictly connected with these aspects. Therefore, popularisation is gaining ground, because even in popular journals now you have all these things. The problem is that very often you do not only have a simplification. In the past, you tended to have the same sort of article rewritten, let’s say, in an easier way, conceiving popularisation as a sort of translation. Intralingual translation. You took a text and you made it simpler. Now, instead, the idea is that it is a total recontextualisation. The article is actually rewritten, reproduced, for a new public, but by people that are no longer the scientific experts, but experts in media, so the text has other purposes other than just informative. Sometimes it is entertaining, sometimes it is just promotional, and this has really blurred the different separations between the two fields. Now many people just see it as an advantage, as a good opportunity to enlarge their audience, to sell more, to get more people. So now you have the risk that the second part, that is, the entertaining part, the promotional part, becomes more important than the informative. And this is much more at risk now that there are no barriers to information.

What is your opinion about media discourse on medicine issues?
It is very important that, somehow, content should be not filtered or controlled, but guided at least, selected. Because if you have wrong information, if you give free access, I do not know whether people are really able to discriminate what is reliable from what is not reliable. What is true from what is not really true. Somehow, there should be in this sector some sort of guidance, some sort of information given. 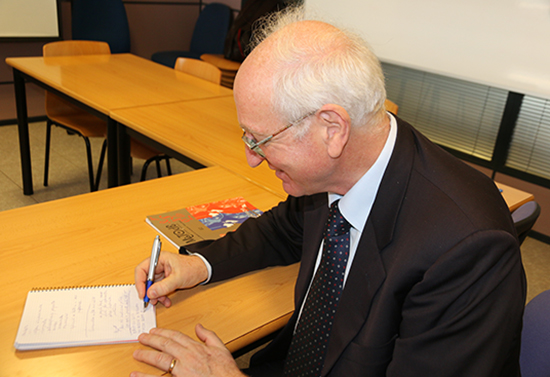 Medical topics are increasingly complex and patients demand more simple information. Is it possible to combine these two aspects?
It is very difficult. Very few people have managed to present the same facts in a simpler way, by using figurative speech, by using metaphors and so on, but there are very few medical experts that can do that. You need, perhaps, some sort of awareness that when talking to people you have to use a different kind of language without making it banal, without actually saying something wrong, but trying to use some sorts of images, metaphors that can make things that are so difficult closer to people, to their lives.

Metaphors and other rhetorical figures can help us to understand complex medical issues, but can they sometimes contribute to the stigmatisation of patients? I am thinking, for example, about «losing the war against cancer».
Of course, the metaphor is not the same thing as the real term. There is always the risk that by giving a message you can make the idea less perfect, less clear than it was because that is the characteristic of the specialised discourse, being precise. There is no way of paraphrasing or reformulating specialised discourse and not make it different. This is general language. In general language you can use two, three terms for the same concept. Specialised discourse usually has one concept per term, so everything else is not clear as that term. It is a sort of rephrasing, generalisation, some way of building a bridge between the lay and the expert.

What’s the role of technology in medical discourse nowadays?
It is greater and greater. For example, in my university now we are forming a degree in engineering applied to hospital applications. Think that technology has become very important. It is not like a PowerPoint or a computer that can be managed by a doctor. Technology is very important because it can help medicine a lot, they can find many more things with the appropriate machines.

And is all of this reflected in medical discourse?
Exactly. This creates interesting flows. For example, some terms that used to be just in the engineering world will become part of the medical world because when you actually have two people working together, there is some usual exchange. If you build a new figure or new discipline, it will somehow enrich also the language of the doctor.