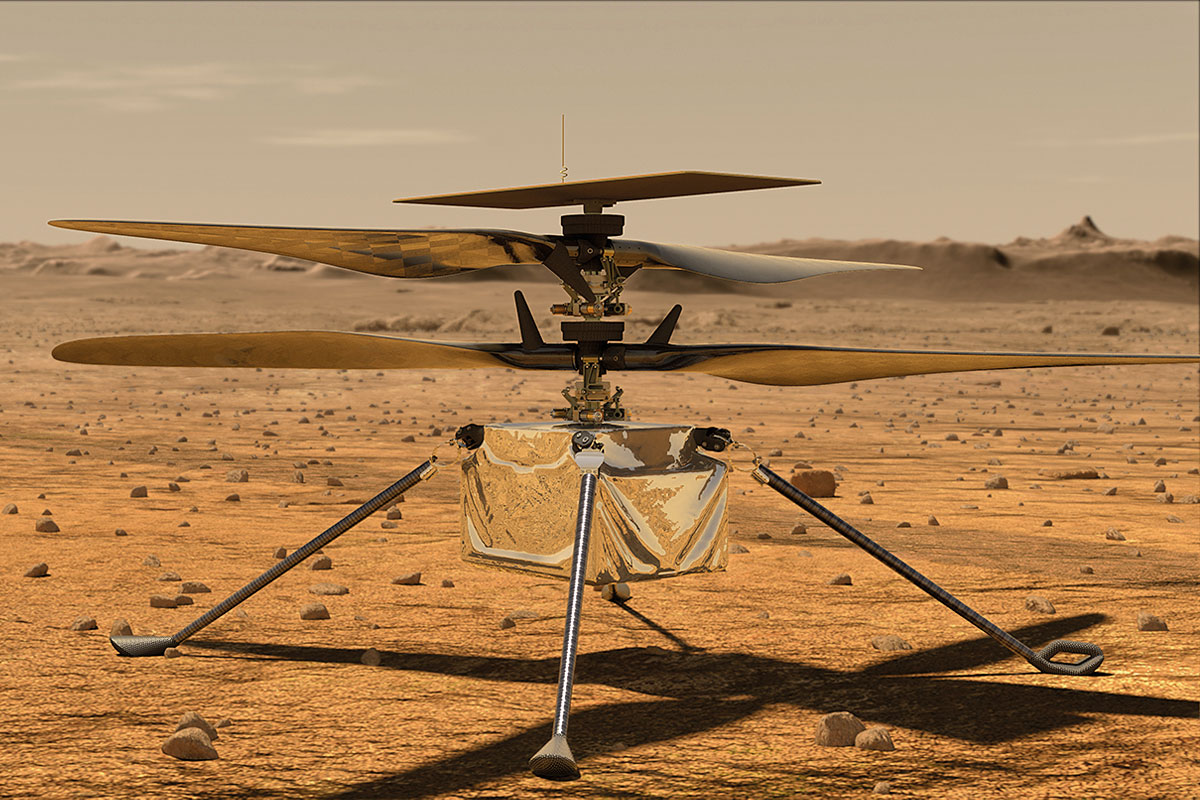 April 2021 will go down in history as an unprecedented milestone: an aircraft performed the first controlled flight in the atmosphere of another planet, emulating the feat performed 118 years ago by the Wright brothers’ Flyer I. It was the Ingenuity, a solar-powered helicopter-like drone, which actually has a fragment of the Flyer I attached to one of its solar panels. It was brought to Mars as part of the Perseverance mission. Its purpose was to demonstrate the feasibility of flight in the tenuous Martian atmosphere, and it was indeed successful. At half past twelve CET on Monday 19 April, we watched from Earth as Ingenuity spun its blades and lifted about three metres off the ground, hovered for twenty seconds, and then landed again at the same spot.

But how can a helicopter fly on Mars? We have always been told that the Martian atmosphere is so thin (0.6% of Earth’s atmospheric pressure) that for all practical purposes it is almost like a vacuum. But that almost makes a big difference here. The strength of wind thrust (like the one produced by helicopter blades) depends directly on air density, and the square of its velocity. All things being equal, a helicopter on Mars will push 0.006 times less. To compensate for this decrease in thrust, the air speed (which is proportional to the rotational speed of the blades) must be 1/√(0.006) times greater (the square root is due to this dependence on the square of the speed), i.e., 13 times greater. Blades spinning 13 times faster will do the trick… But wait! It will not take that much, actually. Martian gravity is 0.38 times that of Earth, so a helicopter will only need to generate 0.38 times less force. The above equation is then corrected as 1 / √ (0.006 / 0.38), which gives 8. The blades of conventional passenger helicopters rotate at a speed of 100 revolutions per minute (rpm). Those of the Martian helicopters will have to spin at 800 rpm, which is entirely achievable with today’s technology (Ingenuity’s blades spin at about 2,000 rpm, although this is a small device, from the size of a regular passenger helicopter).

«Ingenuity’s purpose was to demonstrate the feasibility of flight in the tenuous Martian atmosphere, and it was indeed successful»

Does this experiment also open the door to wind power on Mars? Although there are fast winds on Mars, this may not be the case. To drive a windmill like the ones in our wind farms with such a thin atmosphere, we would need 13 times more wind (the correction for the lower Martian gravity would not apply here, since we are talking about a horizontal wind). While an industrial wind turbine on Earth starts to operate at 10 km/h, on Mars it would need a minimum wind speed of 130 km/h, but the fastest winds recorded during Martian storms barely reach 100 km/h. At the very least, a wind turbine like the ones we use on Earth would not work, and we would need a different design. Along these lines, different models are being developed that make use of the triboelectric effect, i.e., the conversion of the familiar static electricity produced by the wind directly into consumable electricity. This developing technology would require lower wind speeds, although it remains to be proven feasible.

Finally, why would we need to fly a device on Mars? The first answer that comes to mind as a scientist is because «it is cool». But, of course, this has astronautical applications. Having a flying probe makes it possible to access and explore regions that have so far been out of reach for Martian rovers. What is that oddly coloured terrain at the top of the hill, with its steep slopes inaccessible to a rover? What is at the bottom of that crater? Flying would make it possible to investigate it.