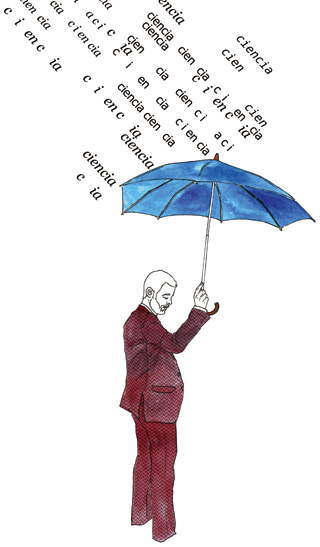 A few days ago, the writer of a radio programme wrote to me asking if I would like to comment on a scientific study on the air. The study said that oral sex reduced the risk of cancer. I answered something on the lines of «no, but if you are interested, I can talk about how the word science is trivialised in some digital media no one would notice if they didn’t exist». A couple of days later I was having coffee with a psychologist friend ans she said that, in her opinion, science was losing credibility. We receive so many scientific papers from everywhere, some full of nonsense and others even contradictory, that people are starting to take science less and less seriously.

This week, during an interview in mainstream radio, I started with a sentence containing the expression «Some studies say that…» and a pundit with no connection to science cut me off saying that the sentence was used so much that it did not mean anything any more. I said: «You know what? Unfortunately, you are absolutely right.» The study I intended to mention, surely as any of the ones you would mention, readers of Mètode or members of different science appreciation communities, was actually very rigorous. But make no mistake, this is not what usually reaches broad audiences through social media. What those outputs emphasise are compelling and exaggerated headlines, made possible by the lack of filter of some editors that are more concerned with going viral than with truthfulness. And that is a pity, because good science offers spectacular results and reflections, sometimes more surprising and shocking than distorted science, but with so much background noise around science, it can all be muddled up and make us doubt about whether an information is reliable or yet another tabloid news piece.

«Good science offers spectacular results and reflections, sometimes more surprising and shocking than distorted science, but with so much background noise around science, it can all be muddled up and make us doubt about whether an information is reliable or yet another tabloid news piece»

How can the reader or listener distinguish them? Asking them to look at methodological nuances or the impact index of the cited journal is too much. All that remains – far from optimal – is the prestige of the source. If you see it in Materia it is most probably fine, but if you read about it in I fucking love science, not necessarily so. Even within the same newspaper, some sections are trustworthy while others confuse excellent science with the most grotesque pseudoscience.

Now, we are in times of growing interest for science; I love the fact that people are including terms like «superstrings» or «epigenetics» in their discussions, albeit with inaccuracies, and we must be happy that there are more and more spaces in the media and good science communicators disseminating science in any conceivable format. But I do perceive the risk of saturating, misleading or trivialising too much and generating a sort of frivolity that could even be harmful for the social image of science. It is simplistic to blame it only on the mediocrity of some media outlets. Sometimes, made-up scientific studies are reported, but in many other cases, as in the case of oral sex and cancer, a mediocre scientific researcher published it in a mediocre journal and a mediocre news agency spread the information. In fact, if we put on our serious scientist suit, maybe the loss of prestige and respect is well deserved. There is too much bad science, and we should be more critical with it than with pseudoscience. The field of nutrition is maybe one of the most deservedly punished, as many studies spread more confusion than information, with clear conflicts of interest, saturation of really weak studies, press offices more concerned with marketing than communication and the distortion of the Mediterranean diet to defend beer, ham, or even tapas. I think our work as journalists or science communicators will increasingly involve becoming a good filter of scientists and studies.

As I defend in my latest book, Comer cerezas con los ojos cerrados (“Eating cherries with our eyes closed”, Debate, 2016), there is such an accumulation of scientific data and studies today that, by cherry-picking data (choosing only the data that favours one’s hypothesis), one can prove almost anything scientifically. In Washington D. C., a physicist who worked for a pro-nuclear lobby told me he based all his arguments on empirical data, but also that he could perfectly defend the opposite stance if he was hired by the anti-nuclear lobby. The same goes for GMOs, climate change, the role of the pharmaceutical industry… And this confusion is taking hold in our society. That is the reason why we need extremely good scientific journalism, and spaces and leading professionals upon whom the public can rely.

«Light» scientific communication is great, and to those researchers who take their free time to disseminate their works, bravo! But let us be careful with the excess of popularisation. For instance, our mantra is to communicate that scientists are normal human beings, that they are not laboratory geeks, that they can also make mistakes, that they can be good-looking… And, obviously, postdoc researchers do not wear a lab coat on the street and enjoy having a drink with friends. But leading scientists who succeed in their field are not ordinary people either. Their field-specific wisdom and their potential for social impact must be praised. It would not be too bad to take a bit of prestige from sportspeople and give it to scientists.

«Science can be explained in a funny way, and humor is a great ally to reach a broader audience»

There is also that point about science being funny. Well, I do not know. Science can be explained in a funny way, and humor is a great ally to reach a broader audience. But science is interesting, relevant, a key to improve the world and even useful to achieve professional development. We must be pleasant and funny, but we also need to reserve a few minutes to elevate the discourse and send key messages, without trying to avoid the useful «Why is this useful?». Look; the most impactful science communication activity I have seen in the last years was in Ecuador. Their president is Rafael Correa. Some like him and some don’t, but he talks in many of his public speeches about the importance of education, of researching in the Amazon, of creating top-level technological universities and of using knowledge and innovation to solve the real problems of the Ecuadorian population. For a lot of people, Correa is a model and transmits the importance of science and innovation for the future of his country with such conviction that the message leaves a mark on people and, perhaps more importantly, on any government structure behind him. Obama has also uttered exquisite speeches on the importance of using science to make intelligent decisions and build a better future. I wish I could hear a Spanish politician speaking like that about science…