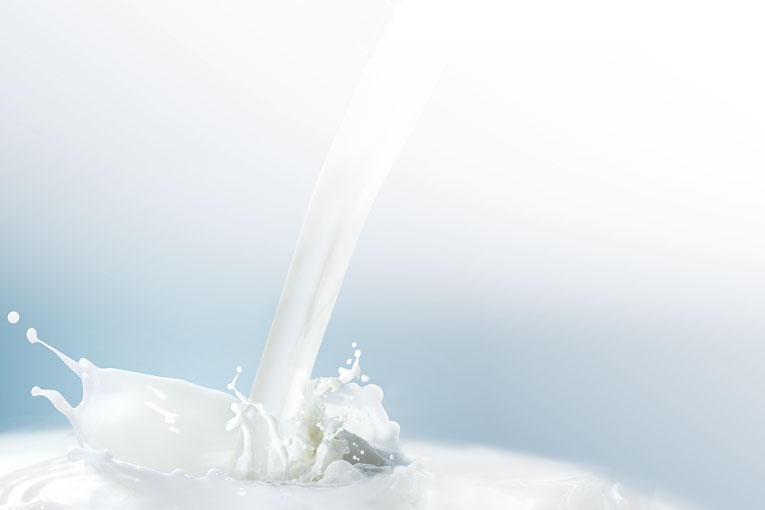 Often the simplest products keep the greatest secrets. Without a doubt, milk is one of them. Its importance cannot be denied: it is our only nourishment during the first stages in life, whether we are given breast milk or cow-milk-based formulas. Later on, some of us humans keep consuming milk from different animals during our whole lives, either as it comes – directly or as an ingredient present in desserts – or as a byproduct – such as cream, butter, yogurt, cheese… The secret of milk is that it is actually a very complex food, a living thing, which can be measured at micro- and nano- scale. Milk is a liquid segregated by female mammals to feed their young during their development. It is produced on the mammary glands, which are biochemical factories holding different structures and cells that create and store the milk, and dispense it to the young. Milk contains living cells and bacteria; enzymes and nutrients; carbohydrates, proteins and fats.

Lactose is the carbohydrate present in milk. Its synthesisation only occurs in the secretory cells of the mammary glands, by means of the specific union of two monosaccharides molecules, one of glucose and one of galactose. This molecule is responsible for that slightly sweet flavor milk has. Lactose exits the cells and enters the plasma in the external aqueous phase. Plasma contains dissolved mineral salts.

Milk proteins are synthesised from aminoacids in specific areas of the secretory cells. The most abundant proteins are caseins, which bind inside the cells before exiting them. That is how casein micelles are formed: they consist of thousands of proteins that are kept together thanks to nano-sized particles of calcium phosphate. Their size can vary from 200 to 400 nanometres (a nanometre is the millionth part of a millimetre). The role of these proteins is to provide the young with aminoacids and calcium. Other proteins that are synthesised in the secretory cells enter the plasma directly. These are the whey proteins and perform several functions: some of them are defensive proteins; others join up to transport certain nutrients, and others are enzymes.

The triglycerides that conform milk fat are synthesised in another specific area of the secretory cells. These molecules join together creating droplets that grow bigger as they head for the outside. When they exit the cell, they drag a part of the cell membrane that covers these fat globules, which are between 100 and 10,000 nanometres wide. These fats contain dissolved vitamins (A, D, E and K).

Therefore, milk is a solution, a suspension and an emulsion at the same time. It contains lactose, mineral salts and dissolved proteins in an aqueous phase; casein micelles in suspension, and fat globules emulsified in the aqueous phase. And, as we have seen, nutrients are produced in specific secretory cells in a bottom-up process.

Female mammals produce milk to feed their offspring. This is the only nourishment during the first stages in their lives. When they grow up, they stop drinking it. And it was the same situation with humanity until stockbreeding developed, thousands of years ago. We domesticated mammals to use their meat, their skins, their workforce. In fact, nowadays, most human beings stop producing the enzyme needed in the digestion of lactose when they are about six. But there is a minority of humans, the descendants of those stockbreeding populations, who can consume milk during their adulthood without a problem.

One of the problems with milk is that this very nutritious fluid gets easily spoiled. That is why different methods for preserving it were developed, such as cheese and yogurts. Moreover, milk processing allows us to obtain a wide range of byproducts, such as cream or powdered milk. And all these products contain microstructures consisting of these three units already mentioned: casein micelles, whey proteins and fat globules. The way these components interact and join together is a good example of molecular binding at a nanometric scale that results in several products with very different properties: starting with a fluid, we obtain soft or hard solids (cheese), spreads (butter), solids consisting of particles (powdered milk), emulsions (cream), foams (whipped cream) o gels (yogurt). These are must-have products in our kitchen than will help us to follow the dairy way. 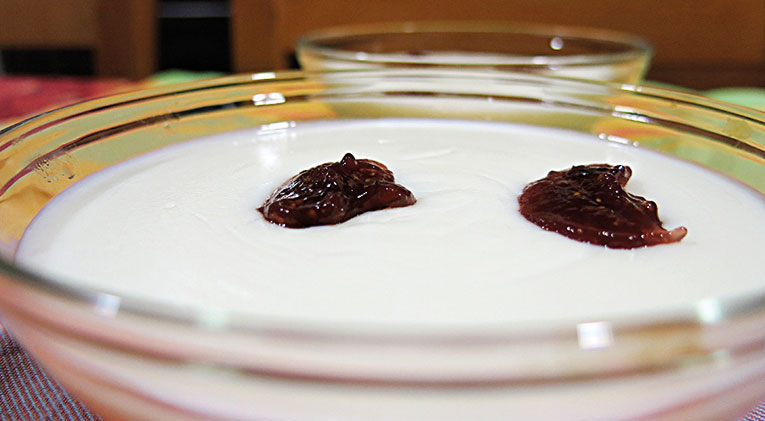 Joan Garí has recently published La memòria del sabor (“The memory of taste”), a journey through the dishes typical of his native cuisine. Towards the end of the book, he talks about ice cream and, in particular, about milk flavoured with sugar, cinnamon and lemon, which he evokes with a sort of proustian picture: him drinking it in summer, on his parent’s flat terrace, right after a good meal…

This drink surely derives from blancmange. This is a dish of Arab origin that arrived to our territory when rice and sugar crops began spreading. It is a good example of the Mediterranean mobility that has encouraged the circulation of people, ideas and dishes. It used to be made with almond milk, rice flour, sugar, spices and poultry meat, lobster or fish. This dish was only available to the upper classes since it employed sugar, which became a common ingredient on European royal kitchens. As time went by, the recipe changed: it lost its protein content, the almond milk was replaced for cow milk in many places, and less spices were used. Concoctions that require rice flour do not tolerate freezing, so they stopped using it as well. That way, the mixture could be kept frozen.

Ingredients
1 litre of milk, 100 grams of sugar, 120 grams of rice flour, aromatic spices (lemon skin, a cinnamon stick, or a piece of ginger and cardamom).

Method
In a pot, pour the milk, sugar, flour and the aromatic spices and let simmer. When it starts boiling, keep it over low heat for a couple of minutes while stirring it. Pick out the aromatic spices, cold it down to about 40°C and distribute it in several containers. Put it in the fridge. Serve it either with fig or pumpkin jam as a base. You can use these jams for decoration as well.