The question of religion and nanotechnology 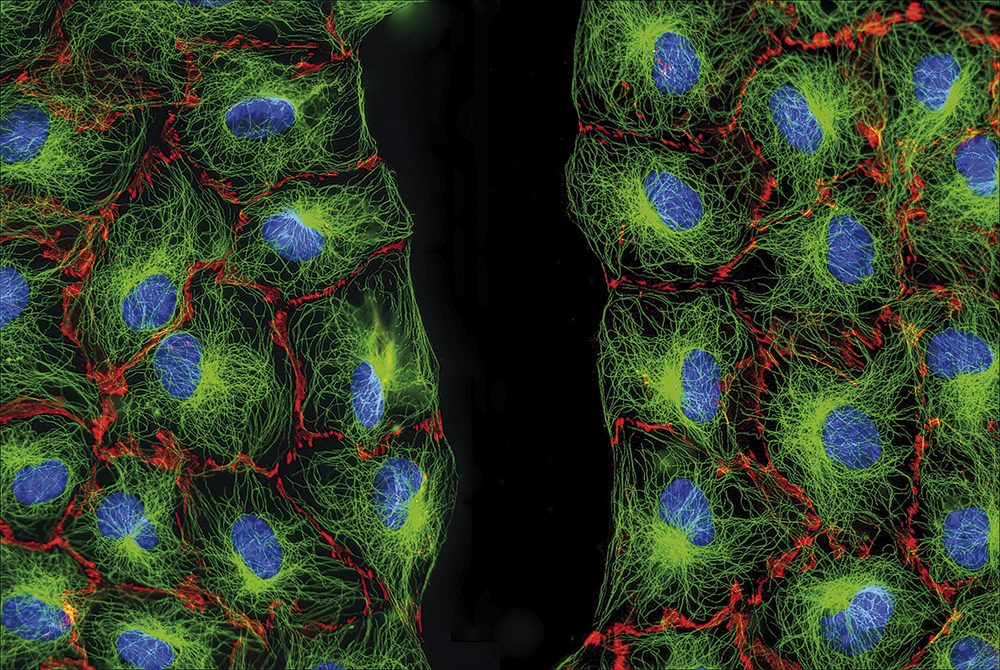 Some social sectors perceive novel designs and new functional features emerging from the nano-world as an efficient way to mitigate the imperfections of our own bodies. Another chance to challenge the limits of life. But where should we draw the line when it comes to research on improving our health? Who should decide? The pro-ducts of nanotechnology are beginning to become a reality, but has social debate been generated to a great enough extent to prevent us from making the same mistakes as in other technologies? The image shows digital multi-colour immuno fluorescence microscopy of fibroblast cells in culture stained with various antibodies (green-microtubuli, red-cell contacts, blue-DNA). This photograph by Jan Schmoranzer was a NanoArt21 2008 winner, directed by Cristian Orfescu. / Jan Schmoranzer / Nanoart21

The science of nanotechnology has a companion: a body of commentaries on ethical issues related to this science. There are conferences and conference proceedings; an edited volume entitled NanoEthics; and a journal, also called NanoEthics, which has been running since 2007. A community of scholars in the humanities and social sciences cares deeply about questions of right and wrong in nanotechnology. Many of these scholars previously studied biotechnology or information technology, so they bring considerable experience and sophistication to ethical issues in nanotechnology.

«Both transhumanists and religious writers reacting against transhumanism are, in effect, defining nanotechnology in terms of enhancing the human body and delivering eternal life»

Three studies reveal that religious beliefs will strongly influence lay public reactions to nanotechno­logy. One from 2005, by G. Gaskell et al., found that in the U.S.A., religious beliefs correlated with negative attitudes about nanotechnology. Another from 2009 by D. Brossard and colleagues reported similar results: religious apprehensions that developed earlier, in res­ponse to biotechnology, served as a template for religious reactions to nanotechnology. People who were less religious were more supportive of funding for nanotechnology. Finally, an examination of the U.S.A. and twelve EU countries reported that all thirteen had comparable levels of science and technology, but that the more religious nations found nano­technology less acceptable. «Religiosity is the dominant predictor of moral acceptance of nanotechnology», concludes D. Scheufele and his team. All three studies indicate that scientific knowledge about nanotechnology has little influence on lay public attitudes about nanotech.

Findings like these are part of a larger body of research which indicates that lay public reactions to nanotechnology will depend very little on scientific knowledge, let alone the preferences of scientists. Instead, reactions to nanotechnology will be shaped by a landscape of values, beliefs and concerns. Religious beliefs will be among the most influential of these. The scientific knowledge in people’s minds is a weak companion to the values, beliefs and concerns in their hearts.

What are the substantive issues in religious thought about nanotechnology? In the early religious commentaries, one topic is especially prominent, namely, transhumanism, that is, a body of beliefs about how technology will save us from illness, aging, death and other problems. The transhumanist writer most relevant to religious issues is William Sims Bainbridge, whose writing is a kind of religious literature: a crusade against traditional religion and a call for a new religion that will deliver eternal life and ultimate meaning.

«True human freedom», he writes, «is found in transhumanism, which seeks to empower each individual to become whatever he or she wishes». According to Bainbridge, «transhumanists believe that we have reached the point in history at which fundamental changes in our very natures have become both possible and desirable».

He calls one such change cyberimmortality: «Very soon, it will be possible to build a computer model of all your preferences, opinions, and mental associations, based on the convergence of advanced information technology with cognitive science and the more traditional methods of psychology and sociology». This information –your spirit stored in silicon, so to speak– would then live forever «within information systems, robots, or genetically engineered biological organisms» so that humanity would evolve «from material to computational planes of existence».

So who would oppose this glorious transcendence? asks Bainbridge «The power of traditional religions is directly threatened by transhumanism so the sacred monopolies can be predicted to suppress it […]. Humans could become like gods, and in so doing may put conventional religion out of business […], religion may feel a need to destroy science in order to save itself.» In describing this conflict, Bainbridge generalizes broadly: fundamentalist faiths are typical of all religion, and religion is more or less universally hostile to technology.

In addition to nanotechnology uploading your consciousness into information systems, a second theme of transhumanism –most frequently articulated by Ray Kurzweil– is that nanomedicine will prolong the human lifespan indefinitely. Which form of eternal life do you prefer: cyberimmortality or a flesh-and-blood body unchanged by time?

Some Christian writers have been appalled by the transhumanist visions because they feel that these will reduce human beings to the subjects of scientific experimentation, and because these visions substitute faith in science for faith in God. They remind their readers of the Christian idea of «embodiment», that is, the belief that Christians should be comfortable with their imperfect bodies, and that bodily death is not something to escape. Christianity has faced issues like these before, such as the Gnostic belief that our bodies were not merely imperfect, but in fact vile and corrupt. Perhaps Christian writers will re-visit the antiGnostic cause of the past and adapt parts of it to their reactions against transhumanism.

This brings us to an important intellectual consequence: both transhumanists and religious writers reacting against transhumanism are, in effect, defining nanotechnology in terms of enhancing the human body and delivering eternal life. It seems to me that this is an unfortunate way to view nanotechnology. It focuses on long-term visions like cyberimmortality while overlooking short-term developments such as nano-enabled drug-delivery systems. Should we really see nanotechnology only in terms of speculations for or against things that might or might not happen many decades from now? Could religious writing not address the rights and wrongs of near-future changes at least as much as far-future topics? 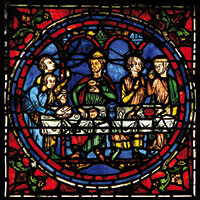 Ethical studies into the impact of Science on society are often res-tricted to the dialogue between specialists in the field. Religion can act as a vehicle to gain understanding of the layman’s behaviour and reaction to new scientific challenges. The acceptance or rejection of new technologies arising from the nanoscopic world will depend on how society, as a whole, assimilates them. Image: some colours of medieval stained glass are directly related to the existence of the gold and silver nanoparticles they harbour. These stained-glass windows, found in churches and cathedrals and spiritual retreats, serve as a metaphor of the possible links and analyses that can arise from seemingly unconnected environments. / Cathédrale Notre-Dame de Chartres

Furthermore, if religious writers think about nano­technology only in terms of enhancement and immortality, they could fall into a trap of becoming systematically hostile to a very broad technology. This is both a strategic blunder and a regrettable approach to knowledge. Nanotechnology in the present, the near-future, and indeed the far-future is much more interesting than the question of enhancement and immortality alone.

A second religiously-grounded position on nanotech­nology is the 2007 statement of the Evangelische Kirche in Deutschland (EKD). The EKD statement criticizes European Union policy on environmental health and safety in nanotechnology. It says that the EU policy is too narrow, too voluntary, and insufficiently urgent. The EKD concludes its statement by saying that it is motivated by Christian principles (EKD 2007). This document is the longest and the most thoughtful position statement on nanotechnology by a religious organization.

A third commentary comes from a special issue of the Journal of Lutheran Ethics devoted to nanotechnology. Three writers attempt to develop an explicitly Lutheran position on nanotech. They find, however, that most Lutherans and other religious people are too uninformed about the science to form ethical reactions, and also that Christian ethical positions on nanotechnology need to be distinct from the large collection of secular ethical positions, which are more numerous and more developed than the religious positions.

As we anticipate the development of religious reactions to nanotechnology, we might benefit from the historical perspective of the experience with biotechnology. This case is instructive because it shows that religious thought was underdeveloped on that topic too. P. Thompson, in his survey of Religious and Metaphysical Opposition to Biotechnology, found that religious statements were often modelled on «standard technological ethics», with little distinctive religious content. Many of these statements from religious groups could just as well have been written by secular groups that had no theological grounding. This of course is what the three writers worried about in the Journal of Lutheran Ethics when they asked about ethical issues in nanotechnology. While Thompson lamented «the inchoate character of religious opposition» to biotechnology, he nevertheless hoped that religious thought in this area would improve.

As religious reactions to nanotechnology emerge in the near future, three questions are worth asking. First, will religious denominations generate positions that conform to their theological traditions? We might expect large denominations that have their own seminaries, colleges and professional theologians to have the intellectual resources to derive ethical positions on nanotech from well-established theological traditions. Other religious groups might have less ability or resources to do so.

An analogy is drawn between the paradigm of Nanotechnology moving atoms one by one and the patient and painstaking work performed by Buddhist monks as they build a sand mandala, placing every grain of coloured sand one at a time. Nanomandala, the work of art by Californian artist Victoria Vesna and nano-scientist James Gimzewsky in collaboration with the Buddhist monks of Gaden Lhopa Khangsten monastery (India), shows how two opposing cultures, one western and the other eastern, one scientific and the other spiritual, can establish a common link, bridging the gap between their visions. The end result of this cultural unity gives way to a different scientific vision, towards modern technological instruments such as electron microscopy and scanning tunnelling microscopy. / Victoria Vesna

Secondly, to echo Thompson’s observations on biotechnology, will religious groups generate positions that are distinctly religious, or will they merely restate secular ethical positions?

«It is to everyone’s advantage, whether religious or secular, that religious positions on nanotechnology are well informed and articulate. Currently we are far from that condition»

Evangelische Kirche in Deutschland, 2007. Towards a Code of Conduct for Responsible Nanosciences and Nanotechnologies Research. [on line] EKD. Hannover. 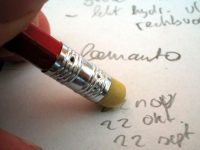 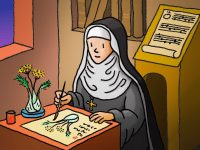 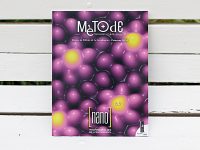 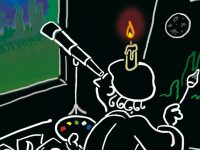 HOW TO CITE THIS ARTICLE:
Toumey, C. (2011). Right and Wrong for Atoms and Molecules. The question of religion and nanotechnology. Mètode Science Studies Journal, 1.