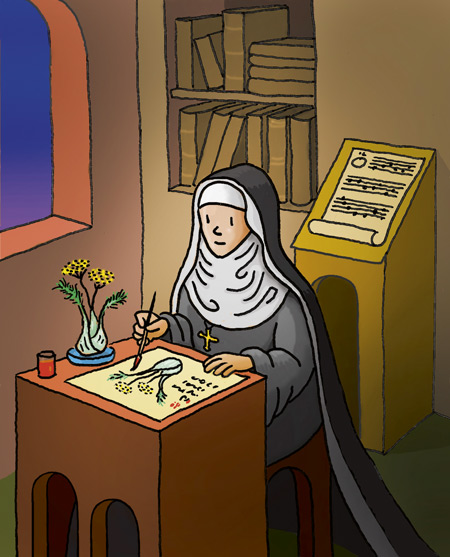 Joseph Aloisius Ratzinger (Benedict XVI) canonised Hildegard von Bingen on 10 May 2012. It is funny: a conservative pope sanctifying a particularly progressive nun, and doing so eight centuries late. They were both German, however, Ratzinger was born in Bavaria and Hildegard in Rhineland. Gregory IX, born in Rome, started the canonisation process of Hildegard in 1227, but he interrupted it: he preferred canonising Francis of Assisi, Dominic of Osma, and Anthony of Padua, renowned preachers.

The fact remains that Hildegarda also preached on the streets, which is extraordinary for a twelfth-century nun. But the truth is that every part of Hildegard was out of the ordinary. She wrote essays, poetry, mystical, philosophical, and scientific texts; she drew, composed music, cured the sick, preached every which way… She was born in 1098. When she was only eight, her parents offered her as a monastic apprentice to the anchoress Jutta von Sponheim. Soon after, both women cloistered themselves away at the Benedictine monastery of Disibodenberg, where Hildegard remained until 1150. Afterwards, as an abbess, she founded the new monasteries in Rupertsberg and Eibingen, near Bingen (Rhineland), where she remained until she died in 1179.

«When a woman is making love with a man, a sense of heat in her brain, which brings with it sensual delight, communicates the taste of that delight during the act and summons forth the emission of the man’s seed. And when the seed has fallen into its place, that vehement heat descending from her brain draws the seed to itself and holds it, and soon the woman’s sexual organs contract, and all the parts that are ready to open up during the time of menstruation now close, in the same way as a strong man can old something enclosed in his fist.» It is the first description of female orgasm made with a scientific aim. We owe it to Hildegard. The fact that it was made by a Benedictine nun never fails to surprise. It can be read in her work Causa et curae, written around 1151, a true treatise in medicine and pharmacopoeia. She had previously written Physica, a compilation of mineralogy, botany, and zoology knowledge. She grouped the two works in a corpus she titled Subtilitates diversarum naturarum creaturarum. She captured the auras of her migraines in drawing. She followed a holistic approach to nature and living beings, surprising for a twelfth-century thinker.

«Nuns rivaled monks in intellectual excellence, a fact that the Trent counter-reformation tried to hide»

She also composed music. Hers are the oldest preserved music sheets, so Hildegard’s music, often dramatised by herself in a sort of proto-operas, is the oldest we can reliably interpret today. She compiled it all in her Symphonia harmoniæ coelestium revelationum. She also created her own language and alphabet, which she called lingua ignota.

Central European monasteries were enormously effervescent in cultural terms in the late Middle Ages. Nuns rivaled monks in intellectual excellence, a fact that the Trent counter-reformation tried to hide. Many Benedictine, Cistercian, Dominican, Clare, or Brigidine beguines (consecrated laywomen) were true «mothers of the Church»: Hadewijch of Antwerp, Elisabeth of Schönau, Bridget of Sweden, Clare of Assisi, Catherine of Siena, Marguerite Porete, Mechtilde of Hackeborn, Gertrude of Helfta, Mechthild of Magdeburg, Beatrice of Nazareth, Julian of Norwich or, of course, Hildegard von Bingen are clear examples. And after Trent, the darkness…

Darkness turned into a form of misogynistic culture, pervasive in Europe even today. Knowledge was not appropriate for women, they said. Nazis took these obsessions to delirium. In 1936, already in power, they remilitarised Rhineland, which had been demilitarised after the Treaty of Versailles, while ignoring, of course, the spirit of Bingen and Hildegard. Science and infamy thus shared a cradle. A tragic metaphor, indeed. Blessed Hildegard of Bingen: enlighten the fools…

history of sciencereligionwomen and science