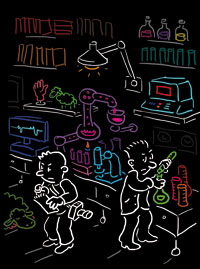 The Valencian newspapers Levante —El Mercantil Valenciano, has always paid close attention to science. In a shy way, of course, and maybe even insufficiently, but it has been a systematic communication that we hope has left an imprint on our readership.

It may be a good idea to start this article by delighting their ears, because later on I will reproach them. I have to admit that science communication is more deep-rooted than ever. Its presence has been increasing little by little in the mass media. Without standing out, the time and space devoted to science in the media has been increasing, and not only because editors have wanted so, but because readers demand this kind of information. People are increasingly better qualified and are more appealed by technology and scientific progress. There are many citizens who look for a rational answer to the many questions they face everyday, and it is the journalists’ obligation to try to give an answer to some of these questions.

Newspapers, just like books, schools or universities, have always been a source of knowledge. They are a great medium to communicate data, facts and wisdom. For many decades they have been a priceless tool for education and the circulation of ideas. Newspapers are not culture makers, but they have extended it efficiently. 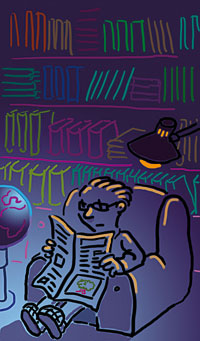 Newspapers spread the most relevant facts in history, they create group conscience, propagate freedom, and help in supervising public administration. However, if we are to be judged by the scarce results of this activity, I must admit that, even though we are very good at denouncing corruption, the consequences derived from our work are indeed discrete. We point out the abuses, but can’t make the abusers pay for their actions.

In my opinion, something similar happens with cultural or scientific journalism. They should help broaden the readers’ knowledge and, therefore, get a more educated, tolerant and open-minded society. But in real life it only inspires the curiosity of the better-educated. What I mean to say is that, even though it is true that the number of citizens interested in these contexts increases everyday, we have to point out, so as not to rise false hopes, that these have a reduced audience, and in many cases, too elitist and demanding.

We are talking about an average reader that has an intermediate or higher education and usually does not share his or her compatriots’ tastes. They are basically urban people, with a strong purchasing power and are also very critical. He or she has his or her own criteria and won’t be easily fooled by siren calls. This is, in general, an accurate description of the citizen interested in scientific news.

«Mistrusts between journalists and scientists are a two-way street. We let ourselves be carried away by clichés and prejudices that corrupt a relationship that should be more natural and beneficial for both parts»

However, aside from this proportionally small part of citizenship there is another group of individuals driven more by curiosity than by a craving to learn and broaden their horizons. They look for emotion and not so much for data, and are more appealed by the wrapping and not so much by the contents.

The mass media have to face this heterogeneous mass of people on a daily basis. It is easy to understand that satisfying all of them poses a great challenge. Together with the difficulty of meeting everyone’s interests I must admit that the journalists’ sense of pedagogy is almost non-existent. I openly admit it. We always let ourselves be carried away by what causes a greater impact and this trend is in many cases incompatible with serenity and prudence, qualities required in science and demanded by at least some of our readers.

Why the press avoids scientific news is not very clear. Most professionals finish their degrees very unprepared for the task— universities don’t focus their programmes to train science writers, war correspondents or parliamentary commentators but journalist in general. To become experts in environmental, economic or sports journalism they have to study some other degree or postgraduate course; or else have a very clear vocation that leads them to learn on their own.

Nowadays, when both journalism and editorial offices are so compartmentalised, these deficiencies are decisive and harmful. If a journalist is sent to the science writing area and does not master the matter is going to have a hard time. The journalist won’t be able to detect the more interesting news and, therefore, will not be able to sell good stories. Under these circumstances, it is highly probable that he or she won’t be able to write the information properly, which also works in detriment of the text— a confusing text is not appealing.

It is as simple as that. Among other things, because the choice of topic or how news are created are not yet controlled by machines. It is not a mechanised process, there is not a computer that allows automatic production that covers for human deficiencies.

In this context, complexes, insecurities and fears are enhanced. Or don’t you feel this way when facing an intricate project?

«Journalists let ourselves be carried away by what causes a greater impact and this trend is in many cases incompatible with serenity and prudence, qualities required in science»

Facing this technical terminology, widely used by scientists would put anyone on guard. Language is sometimes so cryptic that in many cases it is an insurmountable problem. Journalists have to make a double effort to understand the language so it is comprehensible that they feel discouraged. The conclusion drawn is clear— working at a newspaper’s science supplement is poorly valued. Far from being appealing, it is scary; and instead of becoming a demanded and valued post, it is a very complex and demanding one. It is a difficult challenge and it does not show.

In these circumstances we should not expect to find crowds of workers in a newspaper science section— they are but a few, and there are not many who apply for the job. To overcome these obstacles, the newspaper I manage took advice from a good expert, the biochemist Manuel Portolés, whose work as a science writer has been widely recognised. Portolés has coordinated for years a page devoted to science and research, which we know has become very popular.

But mistrusts between journalists and scientists are a two-way street— they mutually avoid each other. Many university professors and researchers tend to treat journalists as if they were vultures eager to write a sensationalistic and scandalous article. Leaving caricatures and exaggerations aside, we have to admit that both journalists and scientists let ourselves be carried away by clichés and prejudices that corrupt a relationship that should be more natural and beneficial for both parts.

To say the truth, we behave like water and oil. The scientist always wants to remain on top in order to be able to control the whole process and every little detail, while the journalist can’t break through this thick oily layer.

«Science writing only inspires the curiosity of the better-educated. They are only a few and tend to be too elitist and demanding»

More than once, in spite of the news-writer’s good intentions, scientists dig in their own heels, mistrust the advantages of revealing the results of their research in non-specialised publications or interprets that explaining scientific progress to people that do not share their motivations or knowledge is an utter loss of time.

All in all, science journalism— which should be used to improve the relationship between editorial offices and universities— actually becomes yet another obstacle between professors and researchers and journalists. Not a good thing…

How to overcome this nonsense, then? The thing is newspapers long for good news stories. And there is no doubt science can provide very interesting information. The press needs good information and scientists need to communicate their discoveries. The solution lies in enhancing communication, overcoming obstacles and taking advantage of synergies. There is no other way. Only proximity and mutual knowledge can break the ice and dilute mistrusts.

At this point you must have noticed that I have avoided referring to the Internet and social networks. I have done this on purpose. I am sorry, but I am not qualified to advertise this extraordinary communicative tool. I must admit they are very helpful, but I think it is poorly managed and does not follow an order. You cannot profit from something chaotic. When there is a better organisation and proper management it will be an infallible tool both for journalists and scientists. Until then, neither newspapers nor research results fit in a 140-character tweet.