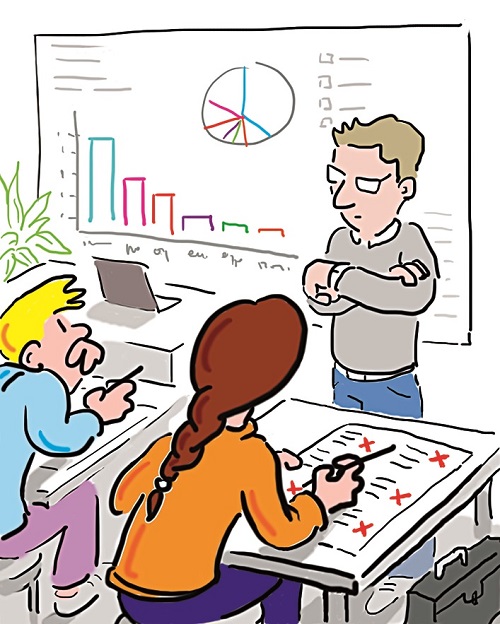 Few precepts have lasted as long as the Regula Benedicti: Rule of Saint Benedict. It dates back to 534, and thus has remained in force for almost fifteen centuries. The Benedictines have made many reforms, but this rule remains intact. None saw the need to change it, be they Anianens, Olivetans, Cluny, Camaldoli, Vallombrosans, Cistercians or Trappists… be they recluses or hermits, contemplative or industrious, strict or tolerant… the Rule of Saint Benedict remained steadfast. This miracle is easy to explain: it is a results-oriented rule which postulates attitudes without subordinating anything to exhaustive rules. It states where one wants to get to, rather than how to get there: Domino!

Casuistry drowns us. In law, politics, business organization. We live amidst small minds, who demand minutiae on how things should be done, instead of taking final objectives as guidance. «You have already told me you are a teacher, now answer the question: can you read and write?». This was the question an officer at the conscription office fired at the boy in front of me, no kidding. That cantankerous re-enlisted sergeant was just doing his job: filling out forms. He personified this obsession with rules, often at odds with common sense.

Catholicism is another example. Christianity has vanished from the map. Canon law and stiff church doctrine have annihilated the evangelical spirit. Precepts (narrow) and casuistry (out-dated) flood the mind’s eye of bishops and popes. It may have set out to make love triumph, but hierarchies spend all their efforts on restricting people in the name of precepts (human) and catechisms (small). For them, Benedict of Nursia is outdated. The fact he is still alive after fifteen centuries is little more than trivia, it would seem…

What is anecdotal and what is categorical: this would be the question. An epistemologically central issue, and more so in the context of complexity. In education, urban planning, sustainability, in any domain, we tend to slide down the anecdotal slope of casuistry. Dictionaries define casuistry as a «provision resolving specific cases». By dint of having everything considered, without having to interpret anything, everything becomes a specific case, thus the rule becomes the sum of all exceptions. And the category, therefore, becomes the integral of all the anecdotes. This obviously does not work. Benedict of Nursia says, «Monks may drink in moderation». He neither prohibits drinking nor goes over the top in casuistic details (so many centilitres of such and such a drink, or so many milligrams of alcohol per kilo of bodyweight, or how many times a day, or whatnot). The aim is simple: not to lose self-control by drinking, and not to establish the exact legal dose that provides an alibi for not acting responsibly.

As for academic qualifications, casuistically has also gone too far, I think. Now everything is programmed, weighted or formularized. Consequently, students (and teachers alike) confuse examination scores with multiplication tables. Each part of the whole is addressed as a special anecdotal case. If it adds up to x you pass; if it adds up to y, you fail. Stark amounts prevail over principles: a disaster! The issue is of great importance, because it promotes a tendency to gain fragmented and counterproductive knowledge. We only have to look at the abstract and general poverty of so many young graduates who mistake their degree course with an obstacle course in the form of multiple choice exams and cuts and pastes of documents downloaded from the internet.

We should take a look back at Benedict of Nursia: Where is all this leading? What is the category? Casuistry, which is limited to exceptions.