Truffle, that Obscure Object of Desire

For the readers of the Carvalho novel series, truffles, and also flaons (a cheese cake), come from the area of Els Ports, in the region of Valencian. The detective lived some unforgettable moments with the consultant Enric Fuster, from Villores, and Professor Sergio Beser, from Morella. Thus, in Los mares del Sur (The Southern Seas), Carvalho, Fuster and Beser have a paella cooked by Fuster for dinner, washed down with plenty of wine from Aragon and topped with a sweet flaons and a mistelle from Alcalà de Xivert; a scene in which Pemán’s «Ode to Paella» also has a starring role. Those flaons were part of the periodic shipments from the sister of the consultant, who also provided cognac-preserved truffles.

«Truffles, like mushrooms, establish a symbiosis relationship with trees and shrubs»

Truffles are the fruit of a fungus species of the Tuber genus. Unlike plants, fungi cannot perform photosynthesis, since they lack chlorophyll. Some live in the decaying remains of dead plants, others parasitize living plants, and truffles, like mushrooms, establish a symbiosis relationship with trees and shrubs. These symbiotic fungi absorb minerals and water from the soil, which they share with plants through their roots, while plants share sugars and other nutrients with the fungi.

A fundamental difference between mushrooms and truffles is that, while the first develop their fruit above ground, truffles do so underground. Comparison of their genomes suggests truffles come from mushrooms. Mushrooms release their spores into the air, and they are dispersed thanks to the wind. But its fruits are defenceless against heat, drying winds, frost and animals. In places where these dangers were common an evolutionary adaptation appeared: they started developing the fruits underground.

This adaptation, however favoured also by the simplification of the fruit, posed a challenge: how would they disperse the spores? Truffles turned to insects and mammals: when the fruits are ripe they produce volatile compounds that attract these animals. Among insects there are different species of flies; though a plague, because their larvae feed on fruit, their characteristic flight is a signal used by truffle hunters to locate them. On the other hand, they also attract mammals, from wild boars to squirrels. That’s why hunters have traditionally used pigs and, more recently, dogs to locate them.

«There are many species of truffles, but only a few are attractive to humans. Highlights include white and black truffles»

There are many species of truffles, but only a few are attractive to humans. And among them, two should be highlighted: Tuber magnatum and Tuber melanosporum. White truffles (Tuber magnatum) grow in the Piedmont and in small areas of France, Hungary, Serbia, Slovenia and Switzerland. Black truffles (Tuber melanosporum) can be found in different parts of Europe: in France, Italy and, especially, in Spain; in fact, in the region of Valencia there is an area of outstanding production in the area of Els Ports, centred on Morella. There is another spot near the area of Gúdar-Javalambre, centred around Sarrión. No wonder, therefore, that the word truffle is used in Spain to refer to black truffles.

Recently Pere Castells (from the Bullipedia project) wondered in Investigación y Ciencia about the high price of caviar, and concluded it was due to scarcity, rather than its culinary attributes. The same stands for truffles. Alain Ducasse points out, rightly, that the olfactory virtues of black truffles are much more important than the taste ones, and describes its scent as «ambiguous, both animal and vegetable, hot and heady, almost soft and at the same time, powerful, penetrating, unique». A scent that depends on the genetics of both the truffle and the host plant, of microbial flora living in the fruit, and their state of maturation and storage conditions. My colleague Aurelio Beltran, during a work break, told me that, in his opinion, they should be used with caution, because in excess they can saturate; but he adds that for his brother José Pío, there is never enough truffle on a plate: you know, there is no accounting… 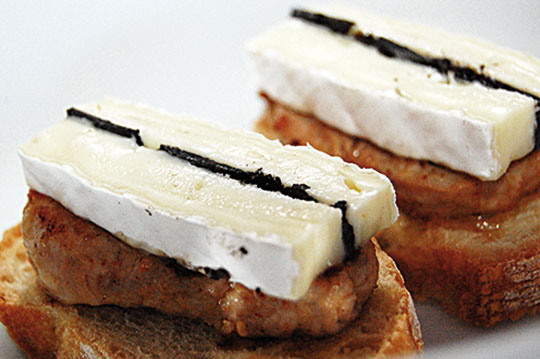 A feature of truffles is their perishability: they last about a week. A traditional preservation method, as we already discussed, is submerging them in cognac. They can be enjoyed as an ingredient in sausages and pates, canned in their juice – heat-sterilised – or in truffle oil. However, keep in mind that the bis(methylthio)methane compound produces the aroma of the white truffle, while a mixture of dimethyl sulphide and 2-methylbutanal in the right proportions produces the flavour of the black truffle. In the market you can find oils scented with truffle, as well as oils to which these compounds have been added in order to mimic the scent of truffles. Obviously, the latter do not have the aromatic complexity of the former.

In The Flavour Thesaurus by Nikki Segnit, the list of ingredients that combine with truffle is not exactly short: among others, we can find asparagus, bacon, beef, cabbage, egg, mushrooms, liver… In the area of soft cheeses, Segnit discusses how to truffle a brie cheese. Among the meat, besides beef, pork also appears. So the suggested recipe is a variation of a tapa we had already tried and celebrated at home, changing the truffled foie for truffled brie cheese.

Split a good brie cheese in two. Cover the bottom with thin slices of truffle, place the top back on, wrap with plastic wrap and let 24 hours in the refrigerator. Allow the brie cheese to warm at room temperature and cut it into suitably sized portions. While the toasts are done, heat the butter in a pan, add the tenderloin medallions and fry for three minutes on each side. Add salt and pepper, remove from the pan. Place the tenderloin medallions on the toast and top with a slice of truffled brie cheese.