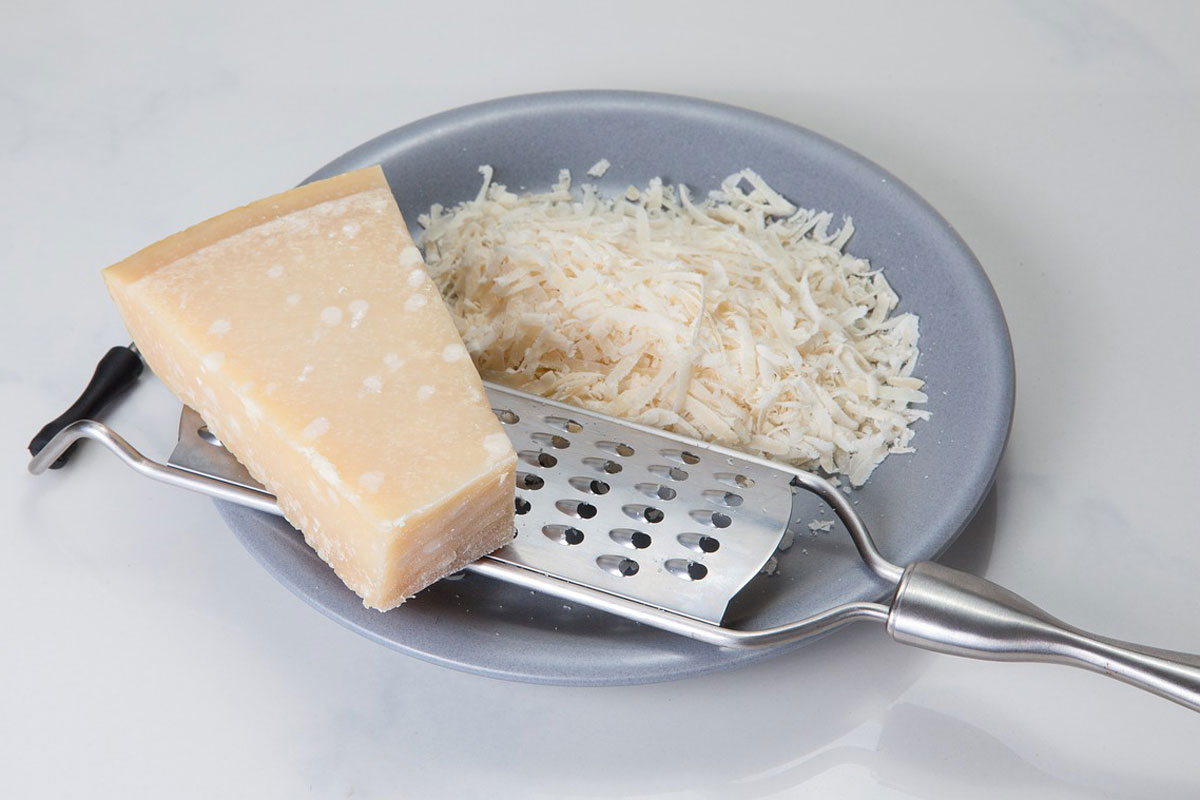 Davide Cassi went and opened the door to his room and, after a little while, came out holding a bag. Inside was a piece of Parmesan cheese, a piece of real parmigiano reggiano all the way from Parma, where Davide lives and works. It is made with partially skimmed milk from free-range cows, feeding exclusively on the green pastures. The massive «wheels», typically weighing thirty to forty kilos, which are obtained after a maturation period of between six months and three years, are first divided into sixteen segments by vertical cuts through the centre and then each portion is divided into two by a horizontal cut. I held in my hands one of these thirty-two almost equal portions, vacuum packed, weighing over a kilo: a little bit of history, a little bit of Italy…

Parmesan cheese is omnipresent in Italian cooking. It is used as a condiment, ten to fifteen grams per person, for pasta dishes, risottos, polenta… Amounts are too small for their ingestion to be nutritionally relevant, and its harmonious taste, a little spicy, with notes of walnut, is subtly disguised in the flavours of the dish. Yet, its use is essential in Italian cuisine…

In the early twentieth century, the Japanese scientist Kikunae Ikeda noticed that the dominant taste of dashi, a traditional Japanese soup, was different from the four basic tastes: sour, sweet, salty and bitter. He named the new taste umami (delicious) and found the compound responsible for this flavour, glutamate, in kombu, a dried brown seaweed used to make dashi. In 1909 he reported his findings in a Japanese magazine. The international community received the news with scepticism because sodium glutamate does not taste delicious. Notwithstanding, glutamate has been used ever since that time as a flavour enhancer in oriental cuisine, and has also been adopted for this purpose by the food industry in the western world.

The perception of taste is due to the presence of small molecules or ions in food that dissolve in saliva. Each basic taste has a different physiological significance, leading us to accept or reject food. Sweet tastes, associated with sugars, indicate that foods are rich in carbohydrates. Salty flavours, caused by the presence of salts of sodium, lithium and potassium cations, help us detect the presence of minerals. A sour taste warns us against consuming spoiled food or unripe fruit, while bitter tastes are associated with alkaloids, making us reject certain plant foods containing toxic substances. In this light, it makes sense that there is a taste to guide us toward foods that are rich in protein.

«In the early twentieth century, the Japanese scientist Kikunae Ikeda noticed that the dominant taste of dashi, a traditional Japanese soup, was different from the four basic tastes: sour, sweet, salty and bitter. He named the new taste umami»

Research into the «umami taste» went slowly. It was found that in addition to glutamate, certain nucleotides such as inosine, guanosine and adenosine are also umami substances. Glutamic acid is one of the most abundant amino acids in nature, and is in free form in milk and certain vegetables, like tomatoes or mushrooms, as well as in certain algae used in Japanese cuisine. Inosine is associated with meat and fish while guanosine is more abundant in plant foods, and adenosine, with a less intense taste than guanosine and inosine, is found mostly in seafood. Furthermore, it was discovered that there is a synergistic effect of mixing glutamate with the umami nucleotides: in other words, the effect proved much greater than that expected from the sum of the effects of the two substances separately. Thus, the flavour-enhancing effect of umami compounds was discovered. Finally, the first decade of 2000 witnessed the discovery of the taste receptors that respond to glutamate.

A glimpse at the history of gastronomy shows us that different culinary systems have exploited the characteristics of the umami taste since ancient times. In ancient Greece and Rome, a fermented fish sauce was used, the so-called Roman garum, thought to be similar to the fish sauces currently produced in Southeast Asia, and with a high glutamate content. Soy sauce is also very rich in glutamate. Moreover, there are traditional food combinations used to make soups and broths that combine glutamate with nucleotides. Thus, in Japan, seaweed and dried bonito are combined, and in Europe, meat or fish and vegetables.

The analysis of free amino acid and nucleotide content of different foods serve as a guide to determine which foods have the umami taste and which food combinations have a synergistic effect. And parmesan is a food with one of the highest free-glutamate contents: that’s right, this cured cheese, renowned for seasoning pasta since the Middle Ages, acts as a flavour enhancer. This also goes for tomato sauce, though to a lesser extent and with a lower concentration of glutamate, developed in the late eighteenth century and adopted in the 1820s as an ingredient of many pasta dishes.

When Davide was in Valencia last November, taking part in the course «You are what you eat», where he talked about the «science of pasta», we offered him a piece of typical Spanish turrón (marzipan) made with egg yolk, as he said he hadn’t tried that type before. Also, we had so-called «black rice» -a rice dish made with squid ink- in a restaurant on the beach. As in Italy rice dishes are basically risottos this «dry» rice, prepared in a shallow paella pan was novel for him. It was delicious –delicious in the usual sense of the word and also in the umami sense–. If you stop to think of it: squid, tomatoes, shrimps… foods with a significant content of glutamate and nucleotides synergistically combined to give an «umami taste», and to enhance the flavours of the dish… 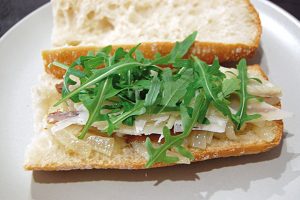 Since February 15th 2010, there are over 190 Waitrose supermarkets in the UK stocking a new product: Taste No. 5 Umami Paste. Developed by Laura Santini, head of the Italian family restaurant Santini (London), it is a combination of various Italian umami-rich ingredients. The Waitrose press release announcing the launch of this «bottled deliciousness» says it adds depth to sauces, risottos, pastas… Inspired by the launch of Taste No. 5, the Londonist website team decided to go in search of the «umami sandwich» and found this combination: parmesan, anchovies, aubergine and rocket (arugula), the memo was posted on March 15th. I decided that, if we’re going to propose an umami recipe, this was a better option than pasta, so I made the sandwich into a bocadillo (made with a typical Spanish baguette) and I’ve replaced the aubergine, unavailable at my local store, for fried onions. And, as you can see for yourself, it’s yum(a)mi!