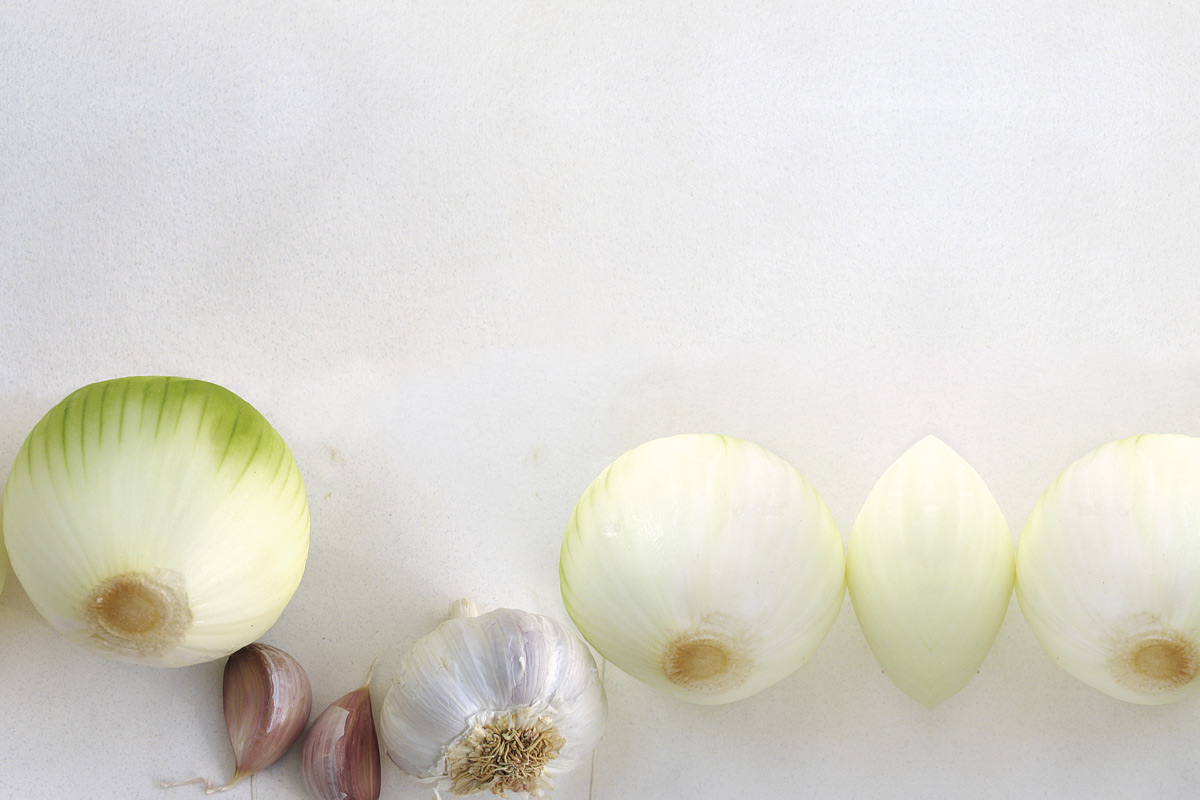 Some months ago, I reviewed a book for the journal of the Spanish Society for Biochemistry and Molecular Biology. We agreed on a fascinating work by Eric Block, Garlic and Other Alliums: the Lore and the Science. And, as usual when I write about a particular food or food group (in this case Alliaceae), Lo que hemos comido (What We Ate) by Josep Pla and the Cuisine Lover Dictionary by Alain Ducasse are must-reads. Both books, in my opinion, are complementary: Josep Pla speaks from a far away past and a regional perspective (from Empordà); Alain Ducasse speaks from an increasingly uncertain present with a wider approach (French Mediterranean Cuisine). I found three things very surprising: both coincide in speaking only about garlic, when among alliaceae there is a vegetable of the ubiquity of the onion, to which we owe so many tears. Their consideration of garlic cannot be further apart. Josep Pla, the one who ate, declares himself against garlic cuisine: «In any dish you prepare with garlic, if you put just a little too much, it will taste like garlic». Alain Ducasse, the one who cooks, thinks garlic is the patriarch of condiments: «In my kitchen, garlic is the star». And from these opposing stances, both advise caution using it: Pla carefully measures it out, and keeps vigilant for the final result; Ducasse defends you have to face it, dominate it.

Alliaceae is a subspecies of the genus Allium. Some of them are used as food or condiments. These plants have evolved to develop different protection mechanisms against predators, insects and microorganisms. Alliaceae counts, in this regard, with a chemical arsenal full of sulphur-rich organic compounds. These plants absorb sulphur from the soil and use it to produce compounds that work as explosive, and keep them in certain areas in their cells. In different parts of them, alliaceae keep an enzyme to work as a trigger. The protection system activates when there is damage to cell tissue: organosulphur compounds and enzymes, which were separated, kept in different places in the cells, get in contact. Enzymes act on the organosulphur compounds and creates very reactive products with antibacterial and antifungal properties that work as insects and mammals repellent.

In the case of garlic, the main compound is alliin, and the enzyme trigger is alliinase. Their interaction forms allicin, the irritant compound, which is responsible for the garlic’s spicy taste. But allicin is very reactive and, as a result of the reactions it takes part on, different volatile compounds are noticeable in the scent of freshly cut garlic. With cold, time or when cooking it more chemical reactions take place, causing an evolution of scent and taste. Different alliaceae store sulphur as different organosulphur compounds and, therefore, each one has its own unique scent and taste. In the case of onions, isoalliin is the main compound, and corncerning enzymes, both alliinase and another one, known as lachrymatory agent synthase, are involved in the process. When isoalliin and alliinase get in contact, they generate two very reactive compounds, and synthase acts on one of them to produce the lachrymatory agent, a small volatile molecule goes airborne and reaches our eyes and nostrils, irritating and causing that annoying weeping. 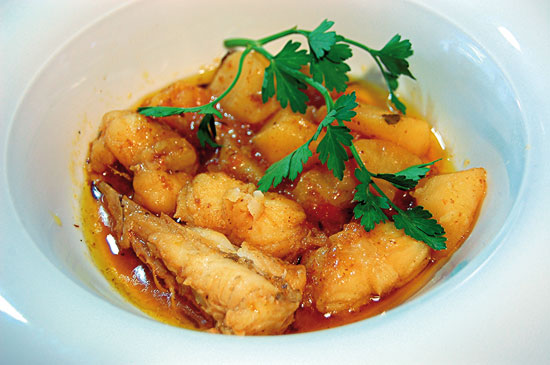 Josep Pla suggested, when he wrote about cooking fish, the possibility to establish the genealogy of some dishes. For him, the two basic ways to cook fish are grilled or boiled. Fish stew is an evolution of boiling in which you add, when cold and in a clay pot, olive oil, fish, garlic, tomato and salt, and then boil it. Provençal bouillabaisse, fish soup and suquet derive from this dish. The difference between suquet and the old pot is that it starts with a garlic, tomato and parsley stir-fry, maybe with nuts as thickener. To this fry you add the fish, potatoes and enough water to get a little reduced broth. Both Monkfish nugat and Burnt Garlic Monkfish are spicy suquets. In the fry for Monkfish nugat we use red pepper, chilli peppers and fried bread and almonds as thickener. Burnt Garlic Monkfish evolves from suquet, but the fry starts slowly burning the garlic until they get an intense brown shade but without completely burning it, so they do not become sour.

Fry the garlic in layers until they are brown, but not burnt. Separate the garlic and stir-fry the slices of bread and the chilli peppers. Put it all in the mortar and turn it into a thin mass. Stir-fry the tomate in the remaining oil. Add the mince and the laurel and stir until you get a dark fry. Then add the hot broth and let it boil for some minutes. Add to the product the diced potatoes and, mid-boil, the seasoned slices of monkfish.