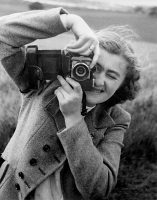 June D. Hart (1930-2007) was born into a Scottish family with only her bus driver father to support her. When she was ten years old, June witnessed the death of her six-year-old brother from diphtheria. Who knows if this event sparked her interest in infectious organisms.

There are other similar cases. The biochemist Margarita Salas talked about how she remembered her grandfather’s death from the Spanish flu in 1918. The American microbiologist Maurice Hilleman, who created around forty vaccines, had also survived diphtheria as a child.

June’s strong vocation was modulated by adverse personal circumstances. Despite being an excellent science student, at the age of sixteen she had to drop out of university for financial reasons. In the post-war period she began working as a histopathology technician, first in Glasgow and then in London. In 1954 she met and married the Venezuelan-born artist Enriques Almeida.

Perhaps to the good fortune of electron microscopy as well as our own, Enriques was not a sought-after portrait artist. The Almeida couple emigrated to Canada and had a daughter. The family economy could not manage without June’s salary. Wives used to, and still do, decline to work outside the home for family reasons. This was not the case. Luckily she found a job at the Ontario Institute for Cancer Research in Toronto, where she was able to develop new staining techniques with a high publication output on previously unpublished viral structures.

The scientific recognition system in Canada was more flexible than in the UK and by accumulation of scientific merit, June Almeida was awarded a PhD in science. Her great contribution to the field was to devise a way to aggregate virions using antibodies to better visualise them by applying Sydney Brenner’s and Robert Horne’s negative staining techniques. This revolutionary technique, negative staining, brought viruses out of invisibility, and showed their fascinating symmetries and structures. By applying a heavy metal, potassium phosphotungstate, to the racks in which the virions were deposited, it was possible to stain the background, highlighting the intact viral particles and allowing them to be photographed.

At that time, identifying viruses was not easy. Cell cultures were barely developed and few viruses were easy enough to culture. In London, Dr David Tyrrell was trying to reproduce viruses from nasal samples to study cold viruses. The only way to reproduce these viruses was to transfer nasal exudates between volunteers, usually students who allowed themselves to be infected. Tyrrell thought he had isolated a cold virus different from existing ones, but he had no images to prove it.

«June found a job at the Ontario Institute for Cancer Research, where she was able to develop new staining techniques on previously unpublished viral structures»

June Almeida’s skill in obtaining virion photographs reached Tyrrell, who sent her three different unidentified samples, one of the new virus, and two with known viruses. She not only guessed which was the new cold virus, which they called the coronavirus, but correctly claimed she had already seen another one like it. We now know that she was referring to the coronavirus causing avian bronchitis, which she had seen in samples from infected chickens.

More than half a century has passed since June Almeida photographed the first human coronavirus. Unfortunately, we now find ourselves in a desperate struggle against a pandemic caused by a coronavirus cousin of that cold virus that did not arouse much interest. Its symptoms were not severe enough. How fine the line is between curious science and trench science.