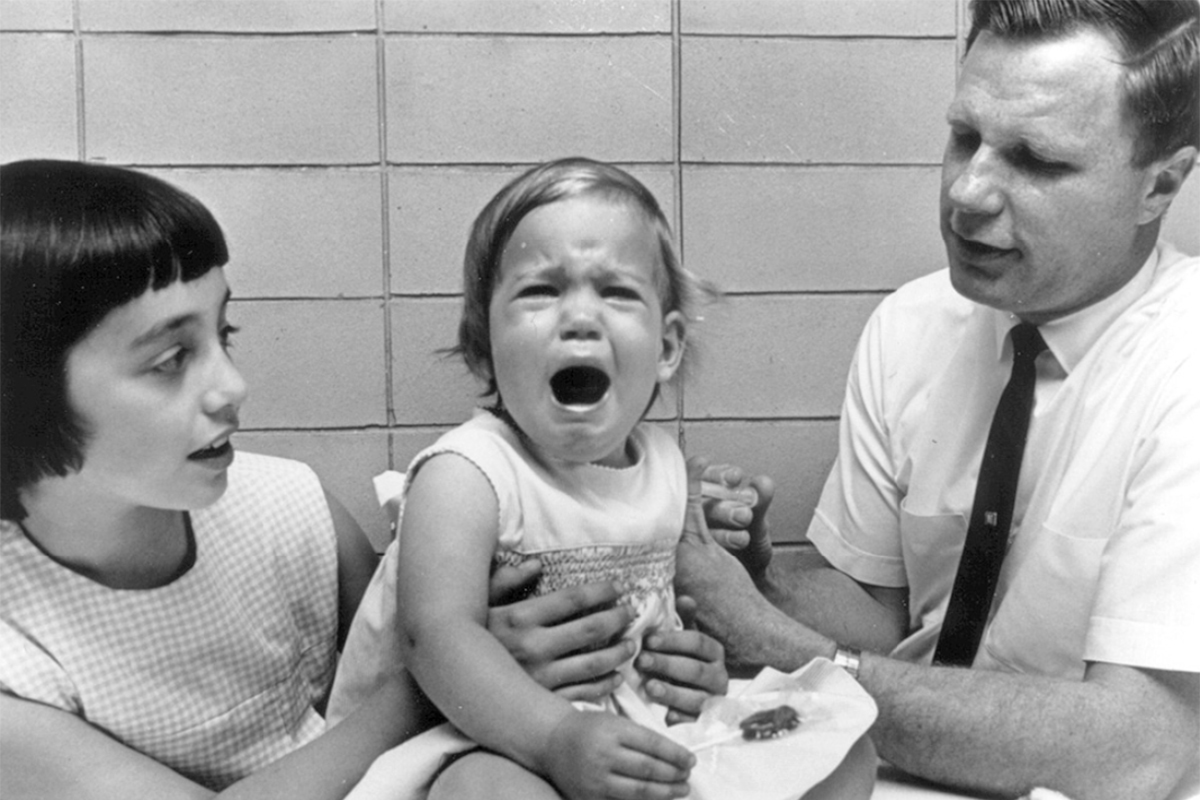 In 1966, Doctor Robert Weibel vaccinates Kirsten, Maurice Hilleman's daughter, against mumps. She is consoled by her sister Jeryl Lynn. Hilleman had created the vaccine based on the virus he had collected from his oldest daughter. / Courtesy of Lorraine Hilleman / historyofvaccines.org

Maurice R. Hilleman (1919-2005), a scientist working in the pharmaceutical industry, was sleeping one night in March 1963 when his daughter Jeryl Lynn, aged five, woke him up with a sore throat. Hilleman felt her neck under her ear and found the parotid swelling that is typical of mumps. He put her back to bed; there was little more a father could do for her. But the virologist saw the opportunity. He got dressed and drove to his laboratory to collect some vials to preserve biological samples. When he returned home, he woke up his daughter to take saliva from her parotid and then returned to the lab to freeze the virus samples.

Surely the name Maurice Hilleman does not ring a bell. If anything, Jeryl Lynn’s name is a little better known among vaccine professionals. Currently, millions of children in the world are vaccinated against measles, mumps, and rubella with the MMR vaccine, which Hilleman invented. This is the first combination vaccine to include the mumps vaccine, made from the virus Hilleman collected that night from his daughter.

The mumps vaccine produced from the Jeryl Lynn strain was licensed in 1967. A memorable photograph from 1966 shows the moment Kirsten was vaccinated together with her sister, Jeryl Lynn, using an experimental vaccine. Hilleman was that confident of its safety and efficacy. We should not be surprised. Not so long ago, the first recipients of experimental vaccines were often family members or laboratory personnel.

«Hilleman’s contribution in the field of vaccination is impressive. He and his team obtained or improved more than 25 vaccines against viruses and bacteria»

Hilleman’s contribution in the field of vaccination is impressive. He and his team obtained or improved more than 25 vaccines against viruses and bacteria. Among the most relevant are nine of the fourteen vaccines of a standard pediatric vaccine schedule: hepatitis A, hepatitis B, pneumonia, meningitis, Haemophilus influenzae type B, chickenpox, and the abovementioned MMR, measles, mumps, and rubella. Hilleman was also the first to successfully purify interferon – an endogenous protein of vertebrates that inhibits viral proliferation – and to describe its properties. Maurice Hilleman is probably the scientist who has prevented the highest number of deaths and illnesses from infection in the history of medicine.

«Mean on the outside, mean on the inside» was a definition that Hilleman could not avoid. His harsh childhood had shaped a man with an unfriendly, often intractable character. His twin sister died in childbirth, and his mother passed away a few days later. Raised in poverty and strict Lutheranism by his uncles on a farm in Montana (USA), he remembers reading and re-reading On the origin of species, a book that was forbidden in his church, out of curiosity for the universal consensus against Darwin. Inspired by his local hero, Howard Ricketts, discoverer of the rickettsia bacteria that causes lethal fevers, Hilleman graduated in chemistry and microbiology thanks to performance-based scholarships.

According to Hilleman, the level of involvement of professors at the University of Chicago with doctoral students was described as «don’t bother until you make a discovery». His discovery was that chlamydia, a sexually transmitted disease, was not caused by a virus but by parasitic bacteria. Ignoring his mentors, he left academia to work in the pharmaceutical industry, where he knew that applying his research could have greater social impact.

The year 2019 ended and nobody was interested in celebrating the centenary of his birth. Prevention, unlike treatment, is certainly an intellectually ungrateful subject.