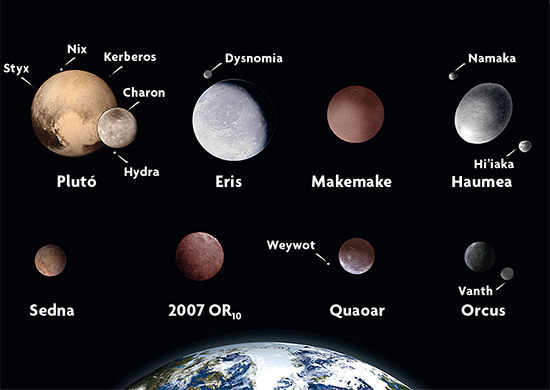 Wikipedia commons, NASA, ESA, and A. Feild (STScI) Eight trans-Neptunian objects of the Kuiper belt with their moons.

The Twitter username of the American astronomer Mike Brown is @plutokiller. It fits him, if we consider that Brown wrote a book titled How I Killed Pluto and Why It Had It Coming in 2010. In the book, he reviews events from ten years ago, which led to the International Astronomical Union (IAU) removing Pluto from the list of planets. The proposal of the Commission which had studied the issue at the IAU meeting, held in Prague in August 2006, was really quite different. Apparently, Mike Brown would go down in history as the discoverer of the tenth planet, an object known at the time as Xena and which, like Pluto, was beyond the orbit of Neptune. The proposal wanted to extend the list of planets from nine to twelve with the addition of the trans-Neptunian Xena, the asteroid Ceres, located between the orbits of Mars and Jupiter along with thousands of other asteroids, and Charon, a large satellite of Pluto (so they would constitute a double planet). The proposal did not come through, but it sparked the process to dethrone Pluto from the planet line-up and turn it into the prototype of what we today know as a dwarf planet.

Xena would later be named Eris and, together with Pluto and Ceres, it entered the list of dwarf planets. The IAU recognises two objects more in this category: Makemake and Haumea. But it is clear that there are not only five dwarf planets, but probably many more, possibly thousands. Brown criticised the decision of having a closed list of dwarf planets and, in 2011, published a list with 390 trans-Neptunian objects that might be considered as such. The list is growing over time. Without a doubt, this is a fascinating field of study for contemporary planetary astronomy. Other objects that may soon enter the category of dwarf planets are Quaoar, Sedna, Orcus and Salacia. We shall pay close attention.

«Brown criticised the decision of having a closed list of dwarf planets and, in 2011, published a list with 390 trans-Neptunian objects that might be considered as such»

But what are dwarf planets? As the rest of planets, they orbit the Sun and are large enough to be spherical due to their own gravity (actually, the condition is for them to be in hydrostatic equilibrium; they can sometimes be even if they have not become spherical, as is the case with Haumea, which is ellipsoidal). The condition that dwarf planets do not fulfil, unlike the other eight recognised planets, is that they must have cleared the neighbourhood around their orbit of other similar objects. Thus, the dwarf planet Ceres shares its orbit with thousands of objects in the asteroid belt, and Pluto, Eris, Makemake and Haumea share it with many more trans-Neptunian objects that populate the area of the Solar System we know as Kuiper belt. Of all we know at the moment, Pluto is the largest, but Eris is more massive. At first, Eris was even considered larger than Pluto, but the reality is that it is just very bright. The brightness of a body that reflects the light from the Sun is a consequence both of its size (reflecting surface) and its albedo. The albedo is the percentage of radiation reflected by a surface with respect to the radiation that it received. For example, the albedo of recent snow is higher than 80%, while that of the ocean is less than 10%. The albedo of Eris is 99%, while Pluto’s is 64%.

And what about size? It matters. Ceres has a diameter of about 900 km. Possibly that is the size a rocky planet must reach for its own gravity to make it round (other smaller asteroids are not spherical). But if the object is made of ice, not as hard as rock, it does not need to be as large for its gravity to make it round. Mimas, for instance, a frozen satellite of Saturn, has a diameter of about 400 km and is round. Other smaller ice satellites are not. Perhaps many trans-Neptunian objects are made of ice. Therefore, they could be round with diameters of 400 km or more and should enter the list of dwarf planets.