«Illnesses must not be seen in a reductionist way»

Full Professor of Psychiatry at the University of Valencia 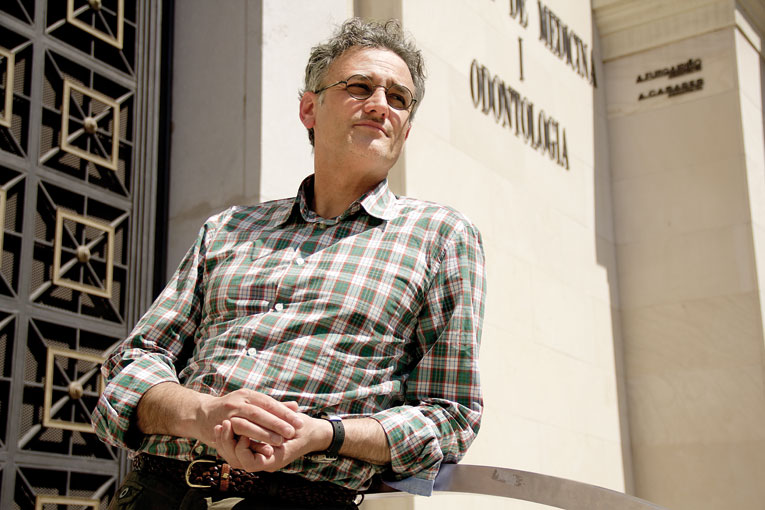 From one of the grey doors lining up in the Medicine department, some musical notes emerge. They come from the office of Rafael Tabarés, professor of Psychiatry in the University of Valencia and main researcher of one of the groups in the Centre for Biomedical Research in the Network for Mental Health (CIBERSAM), who receives us to the sound of Bach, stamping his particular rythm to the morning. «It is the Goldberg Variations played by Glenn Gould», he explains later, holding the music sheet.

Apart from music, he is also a literature lover and, as a sample, he quotes Pessoa in order to discuss knowledge based on paradox. «Things are paradoxes insofar as we do not understand them. When we do, they stop being so. Pessoa said something to the effect that we find things strange at first, but entailing later.» Precisely one of his lines of research, developed alongside professor John Rubenstein in the University of California, is the study of inverse comorbidity between apparently unrelated diseases, such as some neuropsychiatric disorders and cancer. On this topic, inverse comorbidity in cancer, an araticle written by him and Rubenstein has just been released in Nature Reviews Neuroscience, one of the magazines with the most impact in the field.

«We had the boldness to put all of those inverse associations together according to a model, which is the relation between cancer and the nervous system»

Tell us first what inverse comorbidity is. What does it imply?
Before, it would be interesting to explain what morbidity and the morbidity model are. Usually patients do not have only one illness. Most commonly they have several medical problems at once or one after the other. This, furthermore, worsens with age. For instance, it is frequent for someone with Alzheimer’s to develop diabetes, osteoporosis, malnutrition… but the main illness, shall we say, is the dementia. This is the model of morbidity. In the last few years we prefer the term multimorbidity. That is to say, the presence in the same individual of two or more problems or medical conditions without any of them prevailing of being superior to the other.

It is inevitable to notice comorbidity because symptoms of the illness exist, how can the tendency of an illness that, ultimately, does not happen, be studied?
Through observational studies at first. I mean, doctors observe their patients and take notes on how «they die because of this, but not because of this other thing». Given time, some people have tried to see if this was so, doing specific, ad hoc epidemiological studies, using registries of different countries about illnesses, morbidity and death. That is, what do schizophrenic patients die of? That is the reason that really powerful epidemiological studies are published to assess the risk of suffering from cross-illnesses. And that is when the first publications start to appear at the beginning of the year 2000 pointing, in an absolutely independent manner, that patients with dementia do not die from cancer. Why does that happen? And that is how evidence keeps growing in this regard. We had the boldness to put all of those inverse associations together according to a model, which is the relation between cancer and the nervous system. The whole story started towards the end of 2007 in the USA. 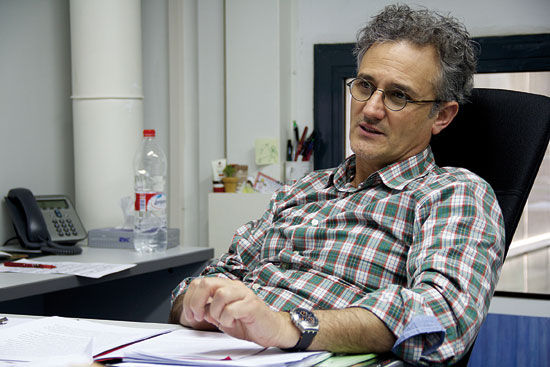 Is it then that these inquiries started?
That is when I started thinking about the issue after some research with John Rubenstein about the chromosome 8. Then I found that it is very frequent in that chromosome that, of 484 noted genes, many of them are related to the development of the nervous system from embryogenesis; to mental illnesses such sa schizophrenia and with illnesses of the nervous system such as Parkinson’s or Alzheimer’s dementia, but also to cancer. And it really caught my attention how it was possible for different groups to find gene variations from the same genes involved in such different morbid processes. From that moment on, I started to investigate and found that there have been research groups during the last twenty years who published separate articles in relation to this. What we do is notice the association, gather everything and subject it not only to a qualitative analysis, but also to a meta-analytical study of every publication on the same topic and a whole reflection on which molecular bases can be behind it. What the reasons for these positive or negative associations are.

How can we know if that inverse comorbidity exists due to biological connections between disorders or to other factors such as the medication these patients take or their way of life?
They are complex associations whit probably several factors involved, not only purely genetical or biological. For instance, we found that schizophrenic patients have less chance of suffering from melanoma, skin cancer. It is inevitable to think that is so because those patients are less exposed to the sun, because due to their illness, they barely have interpersonal relationships and spend a lot of time at home. No doubt there must be more than biological factors, but the interesting fact about this way to study the problems of complex illnesses is that allows, in positive associations, to be aware so there can be specific prevention programmes. We found that patients with multiple sclerosis have a higher chance of brain tumors, patients with schizophrenia have breast cancer more frequently, patients with Parkinson’s have melanomas more often… and even so, we find inverse associations. In direct or positive associations, specific prevention programmes should be set. Inverse associations are windows to why and if this people have protection. They can help us find metabolic pathways and genes that could, theoretically, open research lines for new drugs.
We managed to interest first-rate researchers from the National Cancer Research Centre (CNIO) in the model and we are working and tried to focus on the molecular aspects. We observe how genes and metabolic routes express themselves in the tissues of patients with mental illnesses such as Alzheimer’s, Parkinson’s and schizophrenia. We also study how genes express themselves and what is the functioning in the metabolic routes in three different tumors: colon and rectum cancer, lung cancer and prostate cancer; using the databases, published gene notations (and the ones that that keep being updated internationally), with a work of bio-computing with CNIO –with professor Alfonso Valencia in particular–, who has one of the most interesting lines in the world about this.

Those databases you refer may hold more associations to allow us to advance in the knowledge of these illnesses. Are they a relatively unexplored resource?
Of course, indeed. One of the things I’m trying to initiate is validating the inverse comorbidity model because I am gathering many more information concerning inverse associations. You were saying before, maybe it is not only the genes… Evidently, this could be explained also by other reasons, not only purely biological, neurobiological or related to lifestyle.

As I understand, there is a high percentage of smokers among patients with schizophrenia. This is a risk factor for lung cancer.
Yes, but even if they smoke so much, lung cancer risk is still lower. And when you see those few studies that assess the effect of the association between lung cancer and illness in relatives of first-degree schizophrenics, it is also lower. So it looks like a genetic factor. 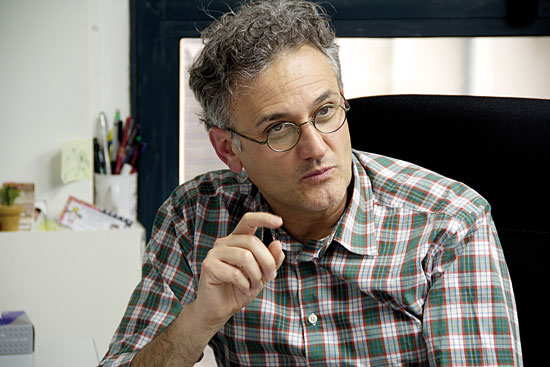 It is a paradox that, although they have a higher risk factor, they suffer from the illness less often.
Sure. However, the internal protection factor is so high that it protects from the exposition to such a well known risk factor. And the fact that this protection still exists in relatives supports the idea of a genetic origin. We also raised the issue of a really interesting and topical concept: reposition drugs; that is, give new uses to drugs that were already used for a different thing. Take the aspirin, for instance. It has been proven over and over again by first-rate studies published in magazines such as The Lancet, that people who have been taking aspirin, because it was part of long-term clinical studies about protection on cardiovascular problems, died less from cancer. All that evidence piled up, got meta-analyticaly processed and the authors point that taking 100 mg aspirin daily would protect, mainly, from adenocarcinomas. In fact, I have been taking aspirin myself for more than a year now…

Because of that?
Of course. I have a family component, my father and some other relatives died because of tumors. More specifically, my father died from a glioblastoma. This is the underlying reason for my interest. I solved my mourning and my personal drama by trying to make an also personal contribution. Sometimes science advances like that. I remember I woke up and started working at four in the morning, to examine this kind of things, apart from my clinical work, teaching… it was exhausting. And what gave me the endurance and what was in my mind was making this type of contributions. And we are opening an interesting line of work. Aspirin is drug with a chemoprotective effect, but there are others. Serotonin reuptake inhibitors, common antidepressants such as Prozac seem to have an anticancer effect, especially in cancers of the digestive system in women… That is, there might also be people who take that medication continuously for other reasons, who are being protected from certain kinds of cancer. This is really interesting because it enables new lines of research. Why do some of the drugs given to schizophrenic patients protect you from cancer? There must be a common link to that. Anyway, our big contribution is the idea that illnesses must not be seen in a reductionist, isolated way. For a long time we have been obsessed with translational research, from the test piece to your bed… This needs to be expanded with a cross-sectional view.

«If a direct association exists between illnesses, why should we not think there can also be inverse associations?»

Are mental disorders and cancer two feared yet poorly understood illnesses?
With mental illnesses, professionals, patients and relatives have endured for a long time the stigma of incomprehension. That has changed in the last times. We see patients as people suffering the consequences of very complex illnesses, such as schizophrenia, bipolar disorder or depression. We are talking about very serious illnesses, incapacitating, which affect very young people and which have never been understood. That has changed over the years. And with cancer, there has been more comprehension, but from a melancholic and patronising point of view… They have something in common, society does not understand in full what lies behind those illnesses. And what lies behind is people who suffer and need support, company; and the ones who can work, need to focus our energy in them.

Is inverse comorbidity a way to balance the scales? Something positive to be found in the illness?
I have been trying lately to understand from a evolutionist point of view the topic of inverse morbidity and direct association. The risk exists that elements like that appear, elements like: is this compensation from something? And, consequently, there is a theological argumentation, trying to put the idea that nature works because there is a final sense of compensation on the table, for instance. I think we have a lot of evidence that nature does not work that way.