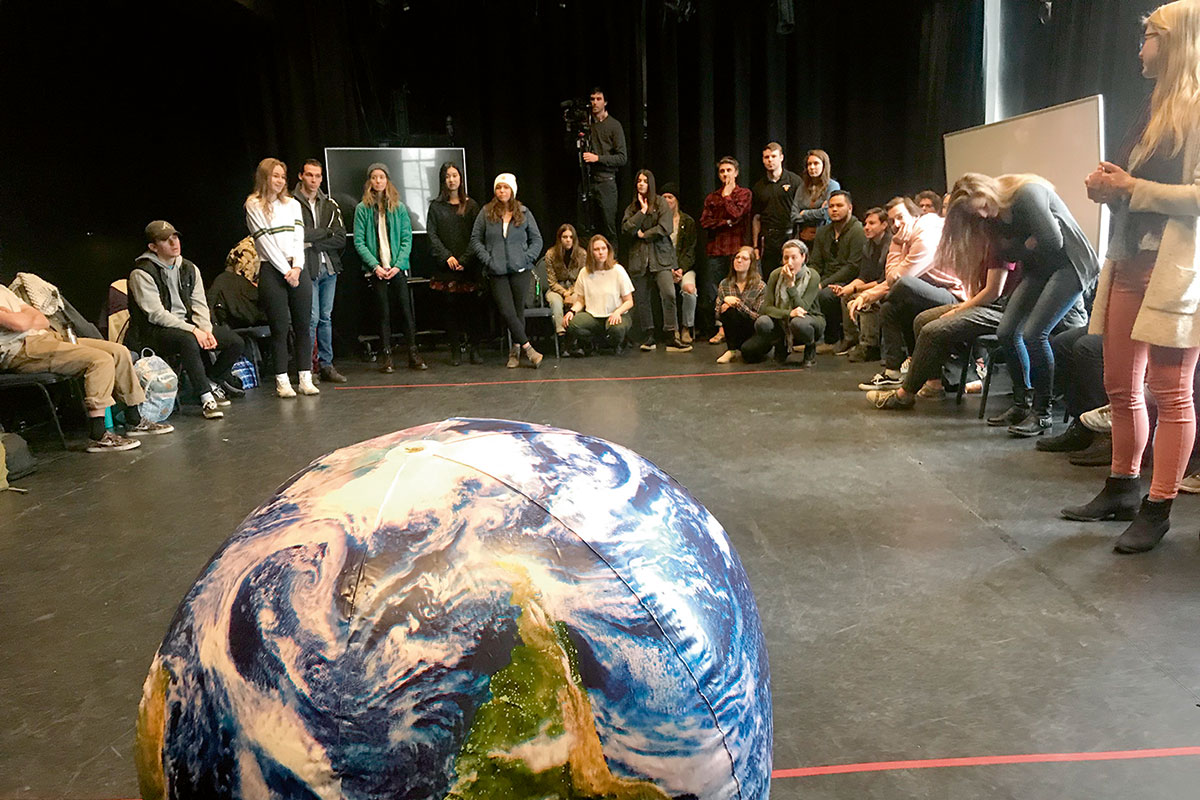 Researcher Max Boykoff has just published the book Creative (Climate) Communications (Cambridge University Press, 2019). In this text, the professor from the University of Colorado-Boulder offers some key ideas he discusses in depth in his new publication. 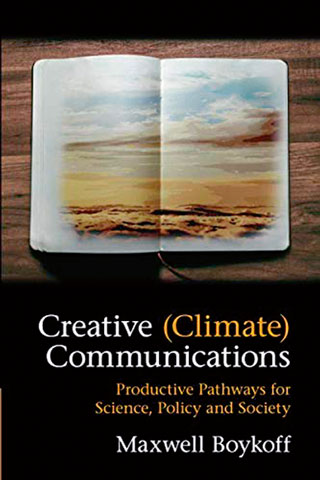 I wrote Creative (Climate) Communications to integrate research from the social sciences and humanities in order to meet people where they are on this critical twenty-first century challenge. In the handbook, I assess ways to more effectively approach communications and to understand what works, where, when, why and under what conditions.

In the book, I examine how to successfully harness creativity for more effective engagement. I integrate these lessons by assembling what I call features on a «road map» along with «rules of the road». The guide is then meant to help as researchers and practitioners proceed with both ambition and caution into struggles to effectively address the many issues associated with climate change.

Through this guidance, I seek to help maximize effectiveness and opportunities and minimize mistakes and dead ends in resource-, energy- and time-constrained environments.

In putting this together, I also emphasize that successful and creative climate communications strategies must be tailored to perceived and intended audiences and can be most effective when pursued through relations of trust. I underscore that context is critical. Cultural, political, social, environmental, economic, ideological and psychological conditions matter.

You might notice that I put the term climate in parentheses in the title. Yes, this book is about creative climate communications. But, the parentheses signify two things. While this book is about climate and climate change communications, there are many transferable guidelines, rules and lessons that can apply to numerous analogue (scientific, political, cultural, and societal) issues coursing through the veins of society; and, also, when one is mindful of audience and context, creative – and ultimately effective – communications about climate change sometimes may importantly involve not invoking the term climate or climate change explicitly. 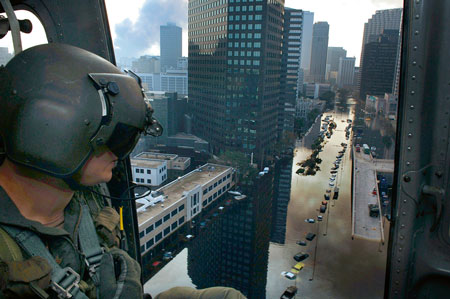 Choosing one language or another when discussing climate change can distance or involve the audience. Terms such as climate crisis can be detrimental to our efforts to facilitate public commitment with climate change. In the picture, New Orleans flooded after hurricane Katrina in 2005. / David Mark / Pixabay (CCO 1.0)

For example, dimensions of climate change may more effectively be communicated to some farming communities in the Midwestern United States (US) by way of conversations about environmental stewardship and land ethics. Being originally from Wisconsin (in the upper Midwest), I can relate to this. Journalist Hiroko Tabuchi has observed, «in breadbasket [US] states, where warming directly affects bottom lines, farmers are discussing the climate – without saying “climate change”».

This takes a view as that while farmers seek to confront a range of pertinent issues like soil erosion, carbon sequestration and water availability inside the farm gate, explicit framing of the issues through «climate change» in the politicized and polarized US context can be counterproductive. To illustrate, Tabuchi (2017) interviewed fourth-generation Kansas grain farmer Doug Palen, who commented, «if politicians want to exhaust themselves debating the climate, that’s their choice…I have a farm to run». She also noted, «while climate change is part of daily conversation, it gets disguised as something else».

«Self-identified Republicans have been found to support clean and renewable energy due to the economic benefits, not due to the climate change benefits»

As another example, facets of climate change can be more effectively discussed with some fiscally conservative business communities through communications about the benefits of deploying renewable energy technologies at scale. In another US example, self-identified Republicans have been found to support clean and renewable energy due to the economic benefits, not due to the climate change benefits (Roser-Renouf, Stenhouse, Rolfe-Redding, Maibach, & Leiserowitz, 2015).

Citizens’ Climate Lobby in the US have enlisted efforts to communicate in resonant ways across the political spectrum. In successfully engaging with Republicans, they have argued that «stewardship» and «responsibility» are resonant terms (Brugger, 2018). 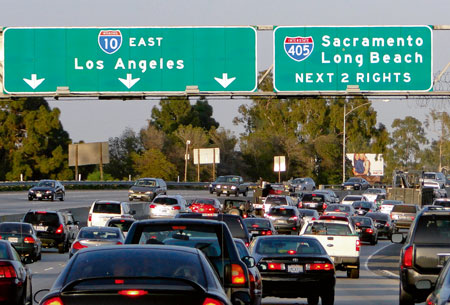 Support to energy policies to reduce carbon emissions grows among US Republicans when the questions are framed as a matter of «air pollution» or «energy security», instead of as «climate change». / Florian /CC-BY-ND 2.0)

Researchers and practitioners have increasingly paid attention to this more discerning approach to (climate) communications, noting and analysing how these choices influence engagement among different audiences. For example, research by Lauren Feldman and P. Sol Hart (2018) has found that support for low-carbon energy policies – like a carbon tax or renewable energy subsidies – increased among self-identified US Republicans when survey questions were framed as «air pollution» or «energy security» instead of «climate change». They concluded, «our findings suggest that strategic messages designed to promote support for clean energy and climate mitigation policies would reduce opinion polarization and more effectively engage Republican audiences if the messages did not overtly mention climate change» (Feldman & Hart, 2018, p. 63).

But this does not mean that discussing climate change through renewables and clean energy is a silver bullet strategy. For instance, in research on the influence of extractive activities on public support for renewable energy, Shawn Olson-Hazboun, Peter Howe and Anthony Leiserowitz (2018, p. 117) found that «individuals living in both mining-dependent counties and counties with natural gas production are somewhat less likely to support renewable energy policies than individuals living outside such places».

Together, a great deal of evidence from social science research as well as practitioner experience supports the notion that being explicit about climate change may alienate rather than appeal to target audiences and constituencies. At times, through chosen language of «climate challenges» and «climate crises», sincere efforts to facilitate greater public engagement on climate change can in fact erect more barriers than bridges. 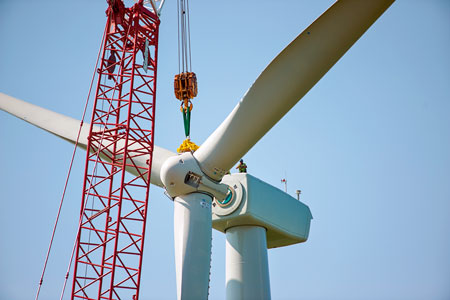 Facets of climate change can be more effectively discussed with some fiscally conservative business communities through communications about the benefits of deploying renewable energy technologies at scale. In the picture, construction work for a wind tirbine at a Michigan wind farm (USA). / Thomas Gennara, Consumers Energy (CC BY-NC-SA 2.0)

In short, smart communication discretion is advised. Of course, this does not mean to suggest a shying away from the issue, rather it means that communications must be creative in order to effectively find common ground on climate change. Amid lessons learned from social science and humanities research findings, it is a mistake to succumb to worries and antagonisms to therefore make «climate change» unmentionable, where communicators do not dare to utter the words for fear of backlash.

In J. K. Rowling’s Harry Potter series, Lord Voldemort is an imposing character and consequently most wizards do not dare say his name. They instead refer to him as «you know who» and «he who must not be named». It would be a mistake to treat climate change like Voldemort.

«It would be a mistake to treat climate change like Voldemort, the Harry Potter character known as “he who must not be named”»

There are clear costs to self-silencing in terms of marginalizing climate change discourse in the public arena as well as reducing salience of the issue for policy actors and everyday people (Walker, Kurz, & Russel, 2017). Moreover, silence can provide social cues that climate change may not be such a big issue or threat (Geiger & Swim, 2017). It also squanders opportunities to confront misinformation and scepticism in the public view (Leombruni, 2015).

The project «Inside the Greenhouse» of the University of Colorado-Boulder explores different ways to communicate climate change from cinema, art, TV, or theater. One of the initiatives of the project is «Stand Up for Climate Change», a stand-up competition for university students. In the picture, a student show in April 2019 at the Old Main Theater of the University of Colorado-Boulder. / David Oonk

Overall, careful approaches informed by social sciences and humanities scholarship provide space and perspective for more authentic and effective participatory engagement. They can overcome limited approaches and narrow mind sets that have blocked off needed pathways to public awareness and action. Creative climate communications approaches then can more effectively re-capture what may be seen to be a «missing middle ground» on climate change in the public arena.

Through this systematic work done in the book, I hope we can better understand that a creative «silver buckshot» approach – different approaches to reach different audiences in different contexts – accompanied by more mindful and wise strategies will significantly improve creative climate communication efforts going forward. I hope my book catalyzes researchers’, practitioners’, decision-makers’ and everyday peoples’ abilities to get more organized and steer our discussions and actions more productively.

«This is an important moment in history. Collective imagination is on the rise»

This is an important moment in history. Collective imagination is on the rise. And creativity (as applied imagination) is expanding rather than retracting from this core challenge of meeting people where they are on climate change in the twenty-first century. As the subtitle of the book suggests – Productive pathways for science, policy and society – I hope this handbook helps readers lean into the formidable challenges of decarbonisation and everyday engagement in the face of climate change.

Thaler, A. D. (2017, 3 January). When I talk about climate change, I don’t talk about science. Southern Fried Science. Retrieved from http://www.southernfriedscience.com/when-i-talk-about-climate-change-i-dont-talk-about-science/

Adjunct professor of Environmental studies at the University of Colorado-Boulder (USA) and member of Mètode‘s scientific board. He is the Director of the Center for Science and Technology Policy Research, which is part of the Cooperative Institute for Research in Environmental Sciences at the University of Colorado Boulder. He is also the Director of the Media and Climate Change Observatory and co-director of the project «Inside the Greenhouse». He has published many papers, book chapters, and books on cultural policy and environmental governance, scientific and environmental communication, science and policy interactions, or climate adaptation. One of his most relevant books is Who speaks for climate? Making sense of media reporting on climate change (Cambridge University Press, 2011). His latest publication is Creative (Climate) Communications: Productive pathways for science, policy and society (Cambridge University Press, 2019).