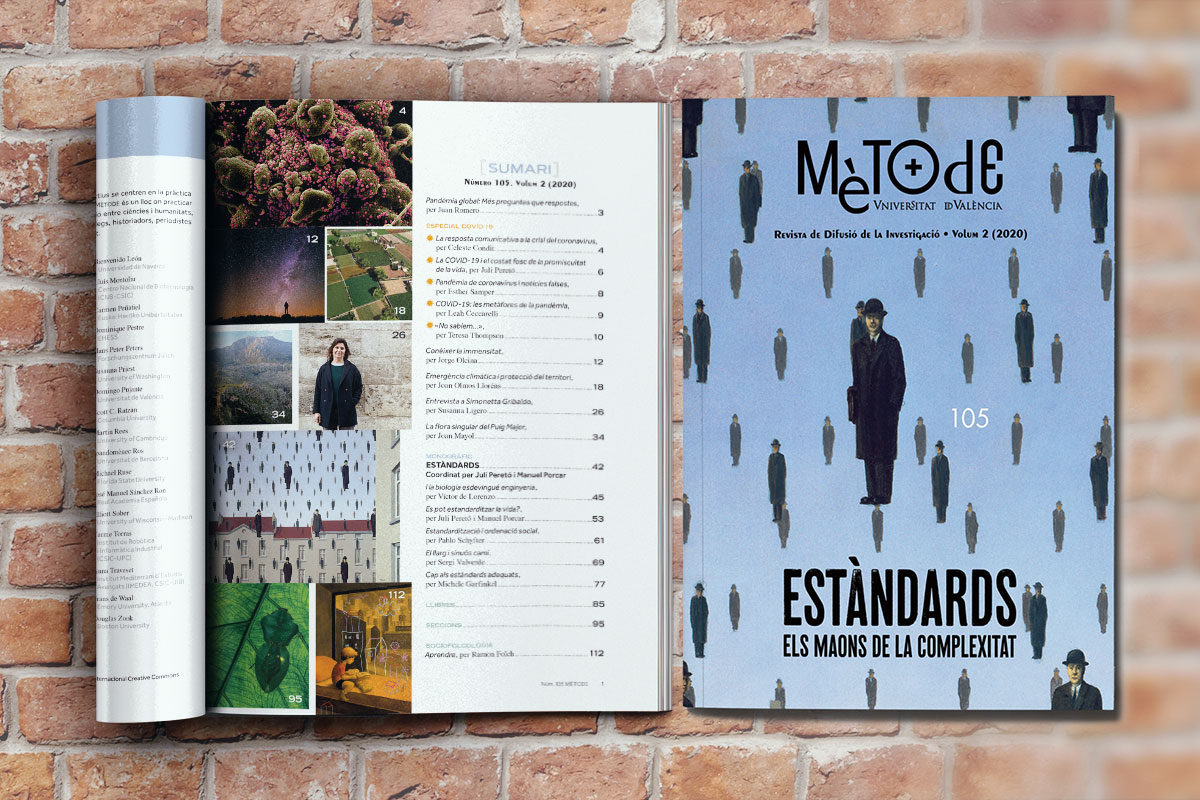 This monograph on standards and norms is accompanied by several well-known works of art: in their compositions, Magritte, Escher, Warhol, and Bacon toyed with shapes, repetitions, and variations, ideas that play a key role both in establishing a standard and in their potential success or failure.

Scientific research – and all the numerous areas that make it up – needs rules to carry out its activity. This seems obvious in some disciplines – engineering, for example – but not so much in others, especially in those that aspire to know how life works and even how to recreate it. However, can standards similar to those in fields such as electrical engineering be created and applied to disciplines like biology or software design? What are the particularities of these latter areas that make a potential standardisation process difficult?

Standards. The building blocks of complexity, the latest issue of the journal Mètode, addresses the issue of standards in science, with special emphasis on synthetic biology; an area where, because of its novelty and complexity, standarisation processes still encounter resistance. The issue is coordinated by Juli Peretó – professor of Biochemistry and Molecular Biology at the University of Valencia and vice-director of the Institute for Integrative Systems Biology (I2SysBio) – and Manuel Porcar – researcher at the Biotechnology and Synthetic Biology group of I2SysBio at the University of Valencia. Both participate with a joint article on the challenges faced by synthetic biology on its way to standardisation. In the opening article of the monograph, Víctor de Lorenzo, researcher at the National Centre for Biotechnology, discusses the foundation of synthetic biology and the type of standards to which it should aspire. Pablo Schyfter, professor at the School of Political Science of the University of Edinburgh, brings a sociological perspective to the physical and social infrastructures that make it possible for standards to work. Sergi Valverde, PhD in Applied Physics and researcher at the Institute of Evolutionary Biology of the Pompeu Fabra University–CSIC, talks about the difficult (and perhaps impossible) standardisation process of computer software. Finally, Michele Garfinkel, Director of Science Policy at the European Molecular Biology Organisation (EMBO), reflects on what standards science needs to meet the objectives of open science and responsible research and innovation.

COVID-19, protagonist of an issue made in confinement

In mid-March 2020, the Spanish government decreed a state of alarm and the entire country went into confinement as a strategy to combat the SARS-CoV-2 pandemic. Much of the world was paralysed by the worst health crisis in recent history, which to date has already claimed more than 350,000 lives worldwide. Faced with this context, Mètode has actively monitored the situation during these weeks on its website and Mètode TV YouTube channel, with articles and contributions by different scientific professionals. The 105th issue of the journal also features a “COVID-19 special” with reflections on the pandemic by leading academics and health professionals such as Joan Romero, Celeste Condit, Esther Samper, Juli Peretó, Leah Ceccarelli, and Teresa Thompson.

In addition, this issue of Mètode also features an interview with Simonetta Gribaldo, microbiologist at the Institut Pasteur in Paris and expert in archaeology; a piece by Joan Olcina on the 40th anniversary of the publication of Carl Sagan’s Cosmos; an article by Joan Olmos on land protection in the fight against climate change; and finally, a visit by Joan Mayol to Puig Major, Mallorca’s highest peak. As always, the journal closes with a number of sections by regular contributors.