COVID-19 has become an unprecedented pandemic 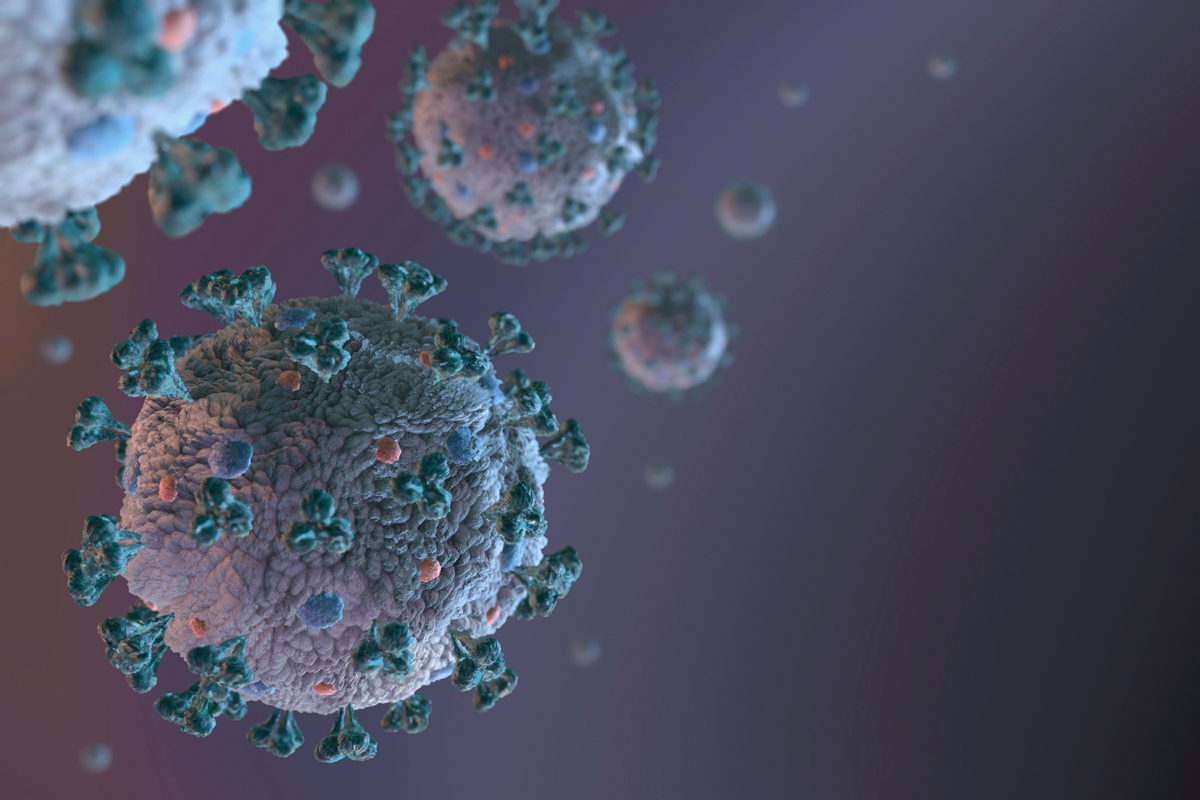 The history of coronaviruses as human pathogens dates back to the mid-1960s, when they were first isolated from respiratory tract samples extracted from adults with symptoms of the common cold.

These viruses, belonging to the Orthoviridae subfamily of the Coronaviridae family (order Nidovirales), owe their name to the fact that they have a spherical shape with protruding spicules giving the virus the appearance of a crown (similar to the sun’s corona).

It has a positive-sense single-stranded RNA genome (27–34 kilobases), meaning that its RNA can be translated directly by that ribosomes of the infected cell.

The first studies shown that these viruses are «ether sensitive», so it was suggested that they had a lipid envelope.

This envelope was later confirmed and is composed of a lipid bilayer with embedded structural proteins: S (spicule), responsible for the crown shape and the recognition by the target cell receptors; M (the membrane glycoprotein), the most abundant structural protein in the virus surface, which defines the shape of the lipid envelope and the assembly of the viral particles; and E (envelope), a small protein involved in several processes of the viral cycle (Figure 1). 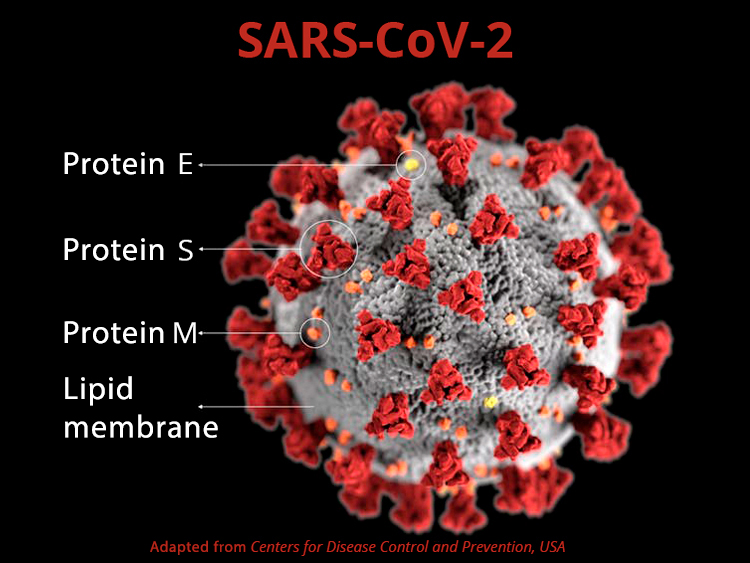 Structure of the SARS-CoV-2 coronavirus.

The lipid envelope represents one of the weak points of the virus, one on which we can act to prevent the transmission.

Because coronaviruses affect the respiratory system, transmission occurs by direct contact with respiratory secretions generated by a sick person’s cough or sneeze if they come into contact with the eyes, nose, or mouth of a non-infected individual.

Soap breaks the lipid bilayer at the molecular level and solubilises (extracts) the proteins of the lipid envelope, inactivating the virus. This means that frequent handwashing using soap and water becomes our first line of defence to prevent the spread of these viruses.

Coronaviruses infect mammals and birds. Bats and birds are ideal hosts because they are warm-blooded flying vertebrates.

Currently, seven types of coronavirus are known to infect humans. Four of them (HCoV-229E, HCoV-OC43, HCoV-NL63 and HCoV-HKU1) are very common, and some of them are present in the common cold, along with other pathogens such as rhinoviruses, so it is estimated that a very high proportion of the population has developed defences against them, becoming immunised.

In addition to these four coronaviruses, three others have appeared more recently.

The first to appear was the SARS-CoV (severe acute respiratory syndrome) virus, which caused an outbreak in southern China in November 2002 and ended up infecting more than 8,400 people in 26 countries in Asia, Europe, and the Americas, causing just over 800 deaths (a lethality rate of 9.6%). The SARS-CoV pandemic was contained in just over 6 months. It was brought under control in the summer of 2003 and no new cases of the disease have been reported since 2004.

Genetically, it is a distant cousin of SARS-CoV, sharing approximately 80% of its genome. It spread to 27 countries in Asia, Europe, Africa, and North America, infecting under 2,500 people, but with a 34.5% fatality rate, causing more than 850 deaths.

The lower number of people infected in this epidemic was mainly due to the low rate of human-to-human transmission of the virus, and probably also to its high lethality, because the virus killed the host reducing its own ability to spread.

It is worth mentioning that in 2015 there was an outbreak of MERS-CoV in South Korea caused by a traveller who had visited the Middle East. This was the most relevant outbreak of the disease outside the Middle East since the 2012 epidemic.

Unfortunately, as we all know, in December 2019 the most recent of the coronaviruses infecting humans, SARS-CoV-2, was reported in Wuhan, China. With over 300,000 confirmed cases of Covid19 in 167 countries and over 13,000 deaths at the time this text was written (22 March) according to the John Hopkins Whiting School of Engineering, it has become an unprecedented pandemic.

The numbers tell us that SARS-CoV-2 is extraordinarily effective in human-to-human transmission, probably because of its incubation time (14 days), which gives it a high pre-symptomatic transmissibility.

But it also has a much lower fatality rate than SARS-CoV and MERS-CoV (estimated at 2–4%) and a low mutation rate, according to the data accumulated in the more than 850 sequenced genomes, which are certainly two pieces of good news.

This is probably an example of Darwinian evolution. If SARS-CoV-2 has already evolved to a high efficiency of human-to-human transmission and a good rate of replication in patients, it has little reason to increase its lethality.

Finally, I would like to stress that detailed knowledge of the mechanism of infection of the virus and its life cycle is our only chance to fight this terrible pandemic. Only scientific knowledge will allow us to get out of this predicament.

The recent initiative of the Spanish government to allocate 30 million euros to fund research into Covid19 is certainly one of the best news we’ve had in the last few days.

But we must remember the current situation after we finally defeat the pandemic, because experience shows us that funding disappears when the need to search for new treatments is less pressing, as was the case with the previous SARS-CoV and MERS-CoV epidemics, in which the increase in specific funding resulted in a significant increase in the number of scientific publications, but the failure to continue these investments limited the continuation of such an increase (Figure 2). 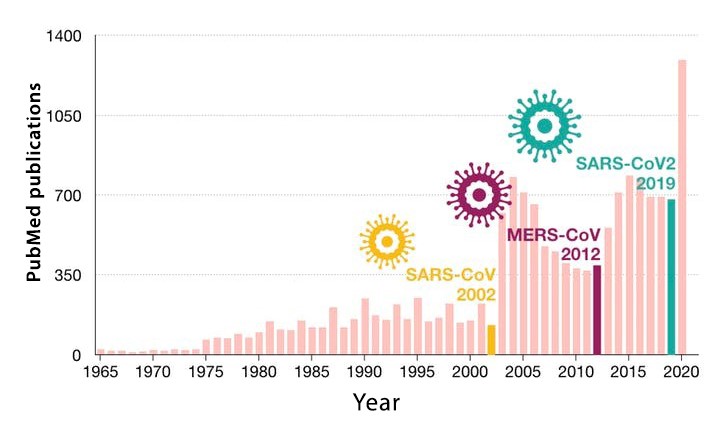 Citations for the keyword «coronavirus» in the PubMed database. The graphic represents the number of annual publications (until 22 March 2020), highlighting the years in which the SARS-CoV, MERS-CoV, and SARS-CoV-2 outbreaks occurred.

Where we would be now if, as a society, we invested more in research? We cannot know, but it is reasonable to think that we would be better off.

This article was originally published in Spanish language at The Conversation on 23  March.

Full Professor of Biochemistry and Molecular Biology of the University of Valencia (Spain).
@imincorreu