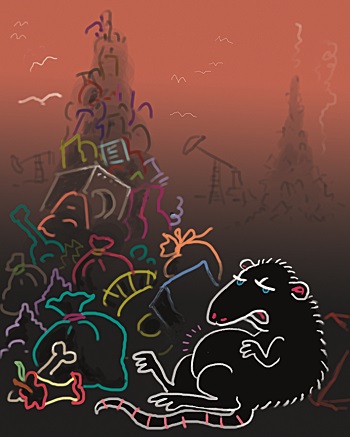 The new main exhibition of the completely renovated Museum of Natural Sciences of Catalonia takes a look over the history of life on the planet. Which is like saying over the history of the planet, because life has been, and still is, a geological force of the first magnitude. Where do you think, for instance, the oxidizing atmosphere surrounding you, responsible for so many phenomena that shaped the Earth’s crust, comes from? An Archean rock of banded iron from West Australia, a result of the metabolic activity of primitive bacteria 2,500 million years ago, illustrates this. In a reducing environment, the anaerobic activity of these organisms caused ferric rains in the form of oxides and silicates – the exhibited rock – and expelled a toxic residue called oxygen. The dumping site of this horrid gaseous waste, the atmosphere, ended up enabling a very different metabolic strategy: aerobic life.

Getting rid of what hinders us has been a biological practice ab initio. Faithful to this principle, we have tirelessly thrown our dirty water into the river. We have not succumbed to the worst of miseries because under the water someone was taking advantage of our dirt, just like we still now breathe the oxygen liberated by the anaerobic organisms of the past. The effective outsourcing of this waste demands either a large space for its indefinite accumulation or a third party to process it. In ecology, this is known as the cycle of materials. As it is a sort of repeatable loop, we speak of balance and things like that. In reality, it is a kind of recurring circular transport, a Penelopian way of doing and undoing and leaving it as it was. It is an ingenious way of fighting against entropy, which prefers the mineral condition of things.

In any case, this machine needs energy. It reuses materials in a closed cycle and consumes energy in an open cycle. The invention has worked for millions of years. It has adorned itself with all kinds of increasingly sophisticated parts, which we now call species. Its prodigious diversity amazes us, an admiration that leads us to proclaim the wisdom of nature, without knowing what that means very well. Like every cautious ignorant, we applaud so as not to look like fools. And we can attest to that.

Indeed, we attest to that and, above all, introduce an unexpected disruption. Two of them, in fact. On the one hand, we tend to generate waste of such nature and in such quantity that they either break the synchronous processing or are unprocessable. On the other hand, we demand more energy than is synchronously available, at least with the capture mechanisms we have had at our reach until now. In other words, we are becoming net outsourcers. Not transferers to the next user that is the almost synchronous receiver of our momentary outsourcing, but generators of synchronously unprocessable outsourcings. Thus, waste is accumulating (carbon dioxide in the atmosphere, pollutants in sediments, synthetic products indigestible for the time being, unleashed radioactive elements…) and the energetic fossil reserves that nobody had touched until now are being depleted.

Our economic system has learned to put a price to production and commerce. It has created markets and regulatory mechanisms that work quite effectively (although I do not know if they are equitable). But it has not assessed the cost of the outsourcing of cumulative residual materials, or the cost of replacing the deposits of exhausted fossil energy. Without assessment there is no price and without price there is no regulatory market. The result is in front of us. Where will we continue outsourcing, in space and time, if in the new global economy there is no outside and only a postponed present? 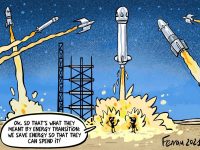 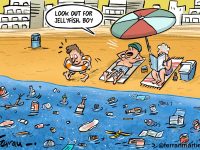 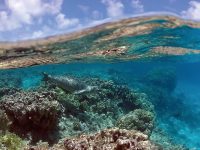