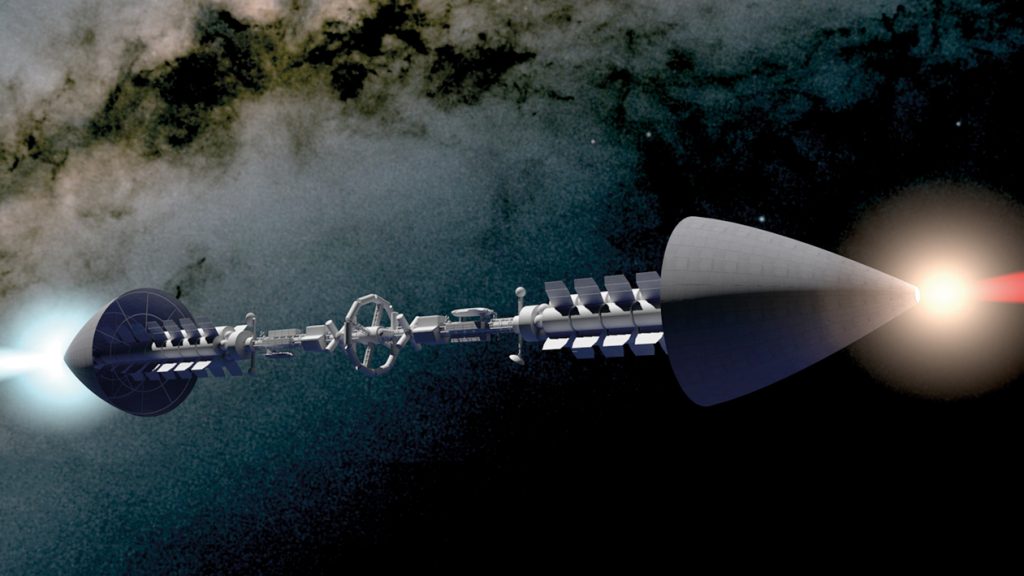 Artistic recreation of a bidirectional interstellar spacecraft design, with shields and thrusters at both ends, and a centrifuge ring in the middle to generate weight. / Courtesy of ©Javier Díez Botet (www.jdiez.com)

The recent discovery of a new planet (the third one) around Proxima Centauri, the closest star to the solar system, reopens the debate on whether a visit to this neighbouring system is worthwhile. Proxima Centauri is a red star only 4.2 light years away from our planet, and one of these three planets (with a mass comparable to that of the Earth) is in its habitable zone, which makes it extremely interesting. From there it is also relatively easy to reach the Alpha Centauri system, just 0.2 light years further away, consisting of two Sun-like stars. The appeal of a robotic mission to Proxima Centauri, considered feasible in the medium term, is obvious. But in the very long term, would a manned mission also be possible?

The first problem to consider is flight time. The Voyager probes, the fastest objects we have ever created (currently travelling at over 50,000 km/h), would take about 40,000 years to get there, if they went in that direction (which they do not). But Voyager probes are travelling by pure momentum; if the spacecraft had an engine that was always accelerating, the times would be shortened considerably. Moreover, if the acceleration were 1 g, the crew would feel just as heavy as they do on the surface of our planet, thus avoiding problems of decalcification and muscle atrophy.

At that acceleration, the spacecraft would reach the halfway point after only two years and eleven months. It would then have to start braking, again with a deceleration of 1 g, to maintain gravity and reach Proxima Centauri with zero velocity. Total flight time: five years and ten months. It would be shorter for the crew; at such relativistic velocities, the time dilation would reduce the time for the travellers to three years and six months. With these accelerations, interstellar flight seems feasible. But it is not all advantages.

It would have to be a very robust spacecraft: withstanding a continuous acceleration of 1 g means its structure must be able to resist being planted on Earth. It would also need shielding at the bow to protect the crew from motion-induced radiation, perhaps large water tanks. Paradoxically, aerodynamic shielding may help: at these speeds, the interstellar gas particles would blast against the spacecraft like a windstorm of biblical proportions. At its maximum speed, the spacecraft would be travelling at 95 % of the speed of light. At that speed, the energy at which hydrogen atoms in space collide is 2.1 GeV, 200,000 times higher than the threshold of what we consider capable of harming an organism. Another critical moment would be braking. It is common to think that a spacecraft stops the engines, turns 180 degrees, and restarts them. But during the turn it would receive this energetic flux of ionising particles from the side without the protection of the shielding. However, there would be a way to avoid this: by braking with a second engine installed in the bow.

The difficulty is more technical than physical. The real problem is how to propel the spacecraft: accelerating for years involves an immense amount of propellant and energy. The latter can be solved by taking antimatter on board, because it has an optimal energy conversion rate, but where could we store so much propellant? At the moment there is no solution: this is the real bottleneck to interstellar travel in reasonable timescales, although some propose to capture it along the way, using some sort of electromagnetic collector system to attract and concentrate the dispersed interstellar gas and direct it to the thrust chamber. If these proposals prove feasible, they may hold the key to unlocking the universe. 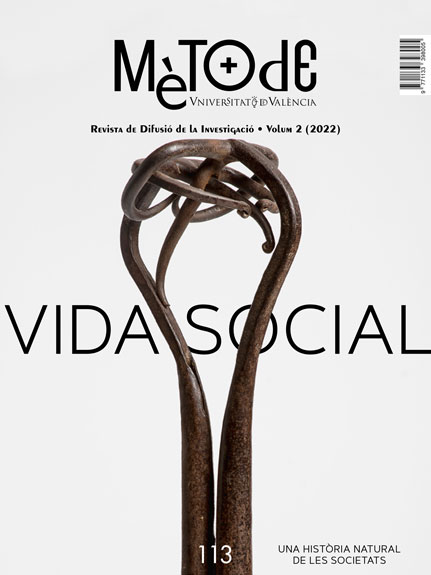