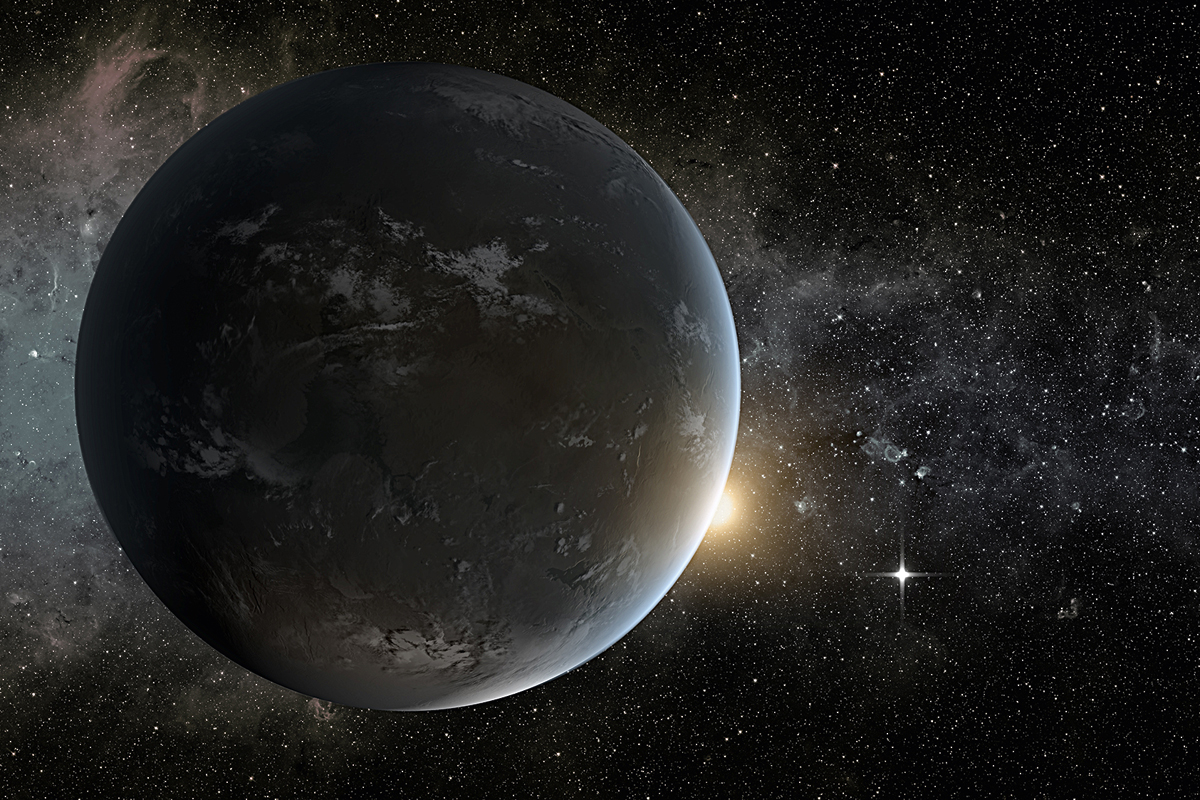 Artistic representation of the exoplanet Kepler-62f orbiting the habitable zone of its star. / NASA Ames / JPL-Caltech

When I was a kid, I was told that stars were faraway suns, and I asked myself if all of them had planets around. For many years I was convinced that the question would never have an answer, but I was wrong. It is possible today, thanks to the advancements in the study of exoplanetary transits, a fast-growing field.

A transit occurs when a planet orbiting a star crosses in front of it and covers part of its light. For this to happen, the plane of the orbit must be aligned with us. Obviously, in most cases this will not happen: if the orbit is at a sufficient angle in relation to us (from a few degrees to being completely perpendicular), the transit will not happen. Using geometry, we can estimate what fraction of those orbits will produce transit events. Let us call this geometric slant fG.

On the other hand, thanks to missions such as the Kepler telescope, which has studied around 150,000 stars, the fraction of stars that shows transits can be easily measured. We will call it fK. Correcting the second data with the first one, that is, with the fK / fG quotient, we can obtain a direct estimate of the actual fraction of stars that have planets. Surprisingly, this number nears one: almost every star has planets.

«Finding strong signals of both gases in an exoplanet is a sound indication of life, especially if water vapour is also detected»

But are they inhabited? How abundant is life in the universe? The answer might also be in transits. Studying the light spectrum of a star before and during a planetary transit and measuring what is lost in the process, we can guess the substances in the atmosphere of that planet (or, if no change is observed, we can estimate that it does not have an atmosphere). This study is useful by itself, but it can be also extremely stimulating because it could allow us to see whether life exists in any of those planets, if we observe in the spectrum traces of biomarkers, of gases produced by living beings. The most important would be ozone and methane.

Ozone indicates the presence of atmospheric oxygen. Although non-biological mechanisms could produce small amounts of it, only life generates abundant oxygen. Something similar occurs with methane. It is common to find it in gas giants, but in rocky worlds such as ours, it is degraded by stellar radiation or by combustion in the presence of O2, and it would disappear unless a source such as vulcanism or biological activity, such as the bacteria in our intestines, replenishes it. Finding strong signals of both gases (reactive with each other) in an exoplanet is a sound indication of extraterrestrial life, especially if water vapour is also detected. But at the moment, such a world has not been found.

If planets are abundant, and they are, it is possible to find them in the closest stars. As, in fact, we do. The same argument can be applied to life. If it turned out to be abundant in the universe, we might as well detect it in a nearby star. And, although much has been written about the difficulty (or impossibility) of interstellar travel, I think finding life would be a difficult-to-resist stimulus to develop an interstellar expedition, at least an unmanned one.

The problem would be the time of arrival. But nanotechnology is just around the corner, and soon ultrasmall probes, with low mass but high complexity, will be possible. Besides, the smaller the probe, the lower the possibility of impacts. In the next century, it might be energetically viable to accelerate that kind of spaceship, propelled by antimatter, to reach a tenth of the speed of light, or even more. Travelling a few decades, we could send them our business card, an exploratory probe attracted by the flatulence of unknown beasts.