Flying to space for a few euros 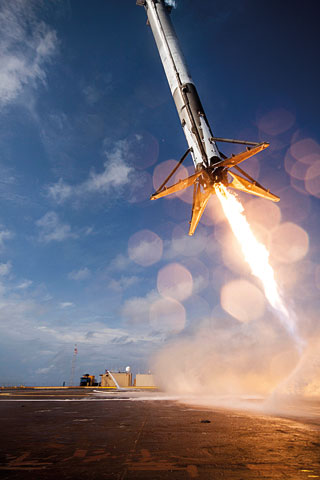 When NASA was founded, the USAF (United States Air Force) was deep into the development of what should be a true spacecraft, the X-20 Dyna Soar, a ship that would take off like a rocket but would later come back from space operated as a plane, allowing to reuse it. However, the approach of the young NASA, directed by Wernher von Braun, would be very different: as their soviet competitors, they would base their work on disposable rockets launched in the trajectory of a projectile, of which only the capsule with the astronauts was recovered. They were mere passengers in a stone that fell with no more control than a simple parachute. It was a faster approach, that promised results on a shorter term than the ambitious USAF project. The fight between these two philosophies was masterfully narrated in Tom Wolfe’s novel – and film adaptation – The right stuff, but ultimately Von Braun’s philosophy was the winner: the Dyna Soar was cancelled and the Saturn V rocket put a man on the Moon.

Eventually, disposable rocket technology, despite some accidents, showed its reliability. But it is very expensive. Most of the expenditure is for the launcher engine, which is lost in every launch. That is why, once the space race had been won, NASA decided to resurrect the old Air Force reusable spaceship project: the Dyna Soar was reborn, turned into the Space Shuttle. The famous space shuttle was NASA’s technological spearhead for decades, the most sophisticated spacecraft to date. But it was not inexpensive. Sophistication made it prone to accidents and maintenance was expensive. The expense per kilo sent to space ended up being higher than with disposable rockets. With the precedent of the Challenger explosion during the launch, the Columbia disintegrating while re-entering the atmosphere in 2003 was the final blow to the pricey shuttle programme. In comparison, the veteran Russian Soyuz capsules, based on disposable rocket technology, have shown commendable security, with no accidents in the last 45 years.

In any case, both options are costly: pricey engines that are lost in every launch or reusable spaceships that are expensive to maintain. Is there any way to escape this vicious circle and reduce the costs of space operations? In theory, the cheapest way to escape Earth would be a space elevator, already discussed in Mètode issue 65: a long cable connected to a geostationary satellite that would be used to bring an elevator up with materials and astronauts. But although the first Space Elevator Conference in 2002 predicted that in twenty years there could be a functional elevator that would be cheaper than the International Space Station, the truth is there have not been many advancements in this respect.

«With the precedent of the Challenger explosion during the launch, the Columbia disintegrating while re-entering the atmosphere in 2003 was the final blow to the pricey shuttle programme»

However, it looks like SpaceX has found an alternative solution. This innovative private company built an unmanned rocket, very similar in shape and cost to traditional disposable rockets, and managed to make it return from space and land autonomously… on the deck of a ship. After four failed attempts, in April, SpaceX’s Falcon 9 rocket successfully brought three tons of supplies and scientific equipment to the International Space Station, and then made a controlled landing on a floating surface only slightly larger than the rocket base. The landing (whose images are available on YouTube) is spectacular, a technological success that will surely reduce the price to access space and will soon open the door to affordable space tourism.