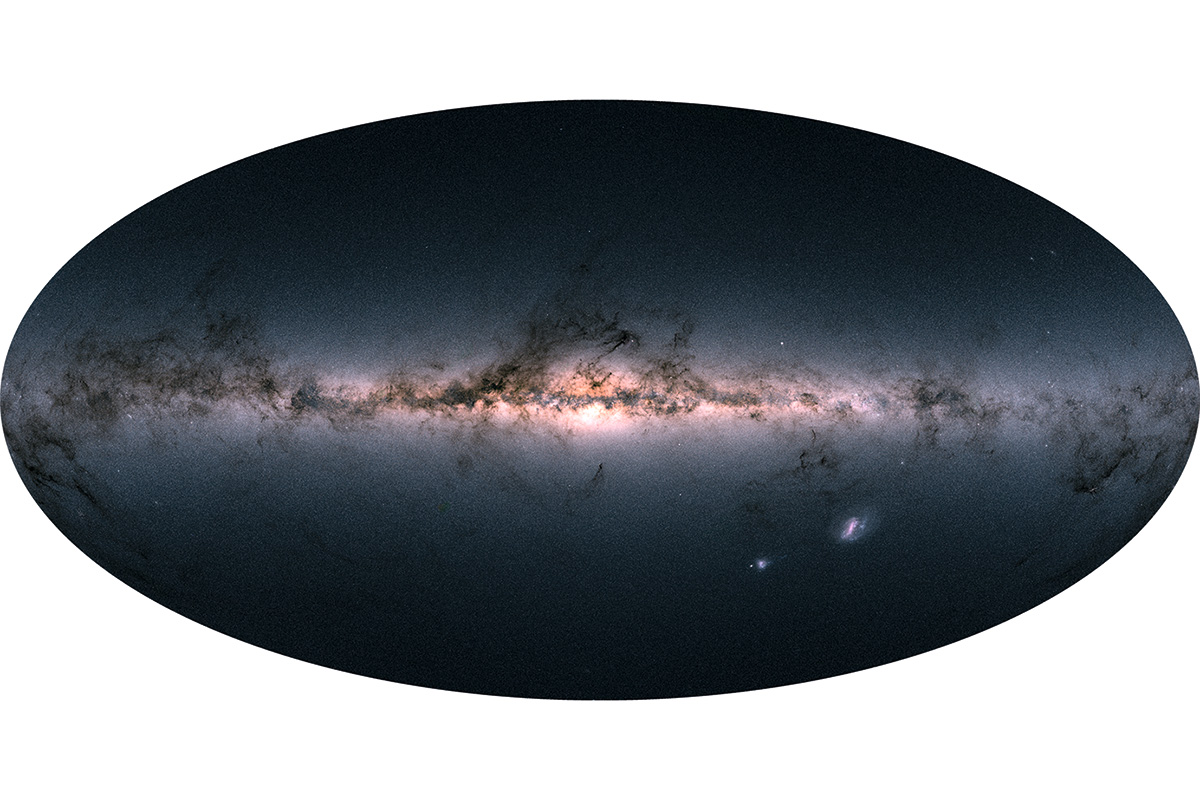 The Milky Way, observed by the Gaia space telescope.

At the Lund Observatory in Sweden there is a painting of the first realistic representation of our galaxy, the Milky Way. The idea of carrying out this scientific and artistic work came from the Swedish astronomer Knut Lundmark who, at the beginning of the 1950s, set out to represent the Milky Way as a whole. Based on data from current astronomical observations, Lundmark proposed to represent the coordinates of the stars and luminous objects that populate our galaxy in an Aitoff projection. There were no computers and the calculations were done by hand. A sphere can be projected into an oval in different ways: one of them is the Aitoff projection, which can be done with the terrestrial sphere or with the celestial sphere.

The Swedish engineer Martin Kesküla was in charge of calculating the coordinates and placing 7,000 stars with known positions in the picture, using white dots proportional to the apparent brightness of the stars, while the engineer Tatjana Kesküla painted the nebulous objects that abound in the Milky Way. The work took two years and was completed in 1955. For a long time, this image, known as the «Lund panorama», was what astronomers reproduced over and over again when they wanted to show the entire Milky Way. It is reproduced, for example, in plate xxiii of the book Astronomia fonamental by V. J. Martínez, J. A. Miralles, E. Marco, and D. Galadí-Enríquez (PUV, 2001). The centre of the galaxy is at the centre of the image.

On 25 April 2018, 63 years after Lund finished painting the Milky Way panorama, data from the Gaia satellite were released (the acronym for Global astrometric interferometer for astrophysics). The satellite has carried out a spectacular mapping of the Milky Way. The image that Gaia has provided of our galaxy, this time made by a computer (therefore, not a photograph either), shows the positions of more than 1,700 million stars and other nebulous objects that constitute the Milky Way and its surrounding satellite galaxies.

«The image that Gaia has provided of our galaxy shows the positions of more than 1,700 million stars and other nebulous objects that constitute the Milky Way»

In this case it uses Hammer’s projection, which is similar to Aitoff’s, but not identical. Each pixel in this image represents the intensity of the brightness measured by Gaia in each region of the sky. The brightest areas of the image correspond to denser concentrations of stars, while darker regions correspond to less populated areas or areas populated with dimmer stars. The presence of even darker bands around the plane of the Milky Way is also noteworthy: clouds of gas and interstellar dust that absorb the light from remote stars and block them from view.

Interestingly enough, Gaia also spent two years carrying out the observations for this image (the same time it took Lund’s engineers to paint theirs). But this time hundreds of scientists and engineers from all over Europe were involved, working on the design, construction, launch, and scientific exploitation of this space observatory of the European Space Agency.

Gaia is 1.5 million kilometres from Earth. From there, it has measured the position, brightness, distance, motion, and colour of 1,300 million stars with incredible precision, as well as the surface temperature of 100 million. In addition, it has detected 14,000 Solar System objects (mainly asteroids). Without a doubt, this mission has allowed us to know our galaxy, the Milky Way, with an unimaginable precision for the astronomer and the engineers who created the Lund panorama.