Hundreds of diseases under a single name 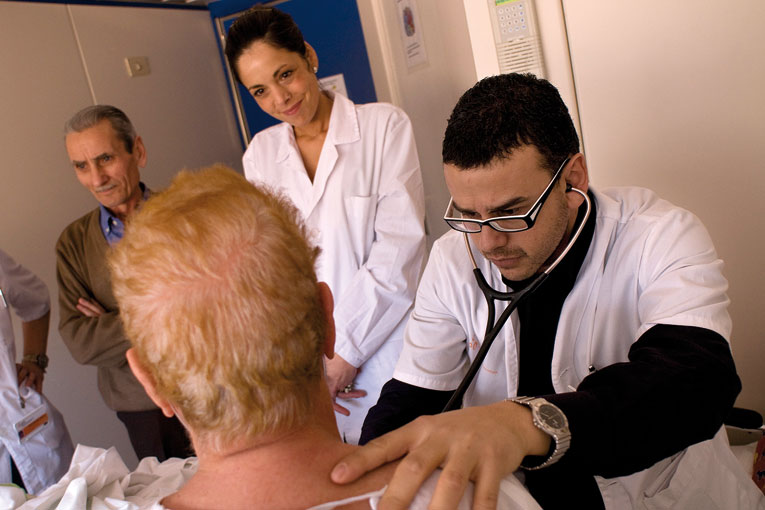 It is not yet clear why a cell is able to accumulate mutations one after another. One plausible theory states that one of the first mutations causes the DNA to become more fragile, facilitating mutations to take place more often than normal. The image , from Tino Soriano’s series «Exploring Cancer» (2009), shows two doctors at the Germans Trias i Pujol Hospital in Badalona visit a terminally ill patient. / Photo: Tino Soriano

ABSTRACT
We all know more or less what cancer is: a set of cells that divide uncontrollably. But behind this simplistic depiction hides one of today’s most complex and serious health problems. Thanks to biomedical progress in the last twenty years we are finally beginning to recognise important differences between known cancers, a discovery that will be key to designing more effective therapies in the near future

Cancer is a disease that currently affects one in every three people. In most cases it is the result of what is called «clonal expansion» which means a process starting with a single cell that copies itself indefinitely. Thus all tumour cells would be identical to the original. Furthermore, we can say that cancer is a «genetic» disease: This anomalous behaviour is due to specific alterations in the genes of the affected cells. Our DNA is constantly subjected to potentially damaging environmental stresses and toxins. Also when DNA duplicates because the cell is dividing, an inadvertent error may occur in the copy of the genetic material. All these circumstances produce what we call mutations, changes in the «letters» that make up our genes. Luckily, we have very sophisticated repair systems that quickly solve most of these errors in the genome, but very occasionally a mutation goes undetected.

If that happens, we will have an unforeseen change in the sequence of a gene. Perhaps it will not greatly affect the RNA or the protein encoded by this gene. In this event it will not pose a problem: there was a «silent» mutation, without consequences. However, more often, even when it involves a single nucleotide of the gene, it can lead to serious problems. For example, the protein manufactured by that gene may be different from normal. It may be shorter, or may be more potent in its usual function, or conversely, it may be less effective. Depending on which gene is affected, it can cause a major disruption of the basic cell functions.

Let us imagine that the mutated gene is responsible for a protein which activates cell division. If the mutation causes more protein to be made than usual, what happens is that the cell will replicate continuously. This type of mutated gene is called an oncogene. The discovery of oncogenes by Varmus and Bishop in the seventies, for which they received the Nobel Prize in 1989, marked the beginning of modern oncology, the first step in understanding what cancer really is and how to stop it (Varmus, 1990). 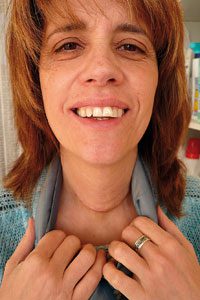 Oncogenes are usually responsible for triggering cancer. A cell with an activated oncogene rapidly divides and gives rise to two daughter cells. These have the same alteration in their genes, since DNA from the original cell is copied word for word, even those that are wrong. So we have gone from having one cell with a mutation, which is dividing uncontrollably, to having two. These double quickly and soon we have four, then and eight, sixteen … and so on, all carrying the activated oncogene and ready to continue dividing in relentless progression.

However, before we get to this point there are very effective mechanisms to prevent greater evils. There are numerous proteins constantly patrolling the cell, looking for errors and problems in the DNA that may lead to the excessive cell duplication described above. When they find one, so-called tumour suppressors are activated, which are proteins intended to prevent the cell from becoming cancerous. As this is a very important bodily task, several different tumour suppressors are always ready. Chief among these is the protein known as p53. When p53 or any of the other suppressors discover that an oncogene is activated somewhere in the DNA and the cell is behaving strangely, it tries to stop it by all means. It immediately summons proteins that repair DNA to attempt to repair the damage that has been done to the genes. These repair proteins are often able to fix the problem and after a little while everything returns to normal. If this is not the case, however, p53 does not take any chances: when in doubt, it activates a cellular suicide program called apoptosis, and the flawed cell autodestructs. Together with other tumour-suppressing mechanisms, this is usually very effective in preventing the appearance of malignant cells.

«Cancer only develops if a series of mutations accumulates in certain key genes. One alone is not enough, it takes many, we do not know exactly how many»

Naturally, if that were always the case there would be no cancer. So how does the cell escape this death sentence? The system is the same as in oncogenes: for cancer to develop a new mutation must occur, one that disables our natural defences. Indeed, in fifty percent of cancers we find an altered gene that specifically causes the p53 protein not to be produced or to be inactive. Moreover, it is believed that other cancers may also have an error in one or another gene controlling the cluster working in coordination with p53.

Cancer, therefore, only develops if a series of mutations accumulates in certain key genes. One alone is not enough, not even two, in fact it takes many; we do not know exactly how many. One of the most widely accepted theories nowadays, first proposed by the researchers Hanahan and Weinberg in 2000 and revised in 2011, is that the cancer cell has the following hallmarks: it must be able to divided continually; be immune to the signals that order it to stop; escape apoptosis and other tumour suppression mechanisms; become immortal; be able to generate blood vessels and invade other tissues. That means that many genes have to mutate and malfunction for the cell to acquire all the abilities necessary to form a tumour.

Thus, one could see cancer as an extreme case of bad luck. Indeed, for DNA to mutate due to toxins or stress is quite difficult, but it can happen. For the mutation to affect an important gene in cell division may be a coincidence, but is not highly unlikely. But the likelihood of a single cell undergoing one mutation after another in key genes until it turns into cancer is statistically very slim. And we are lucky that it is so. As there are trillions of cells constantly dividing in our body and subjected to attacks that can alter DNA, if cancer was a more easily acquired disorder, we would all suffer from it within a few years of birth. That is what happens when we use genetic-engineering techniques to experimentally remove the tumour suppressors in a mouse: in fact the importance of p53 and similar proteins was discovered because mice without all of them develop cancers quickly. This is also the case of a rare disease called Li-Fraumeni syndrome, in which those affected carry an inherited mutation in the p53 gene, causing them to develop different types of cancer before reaching the age of forty.

It is not yet clear why a cell is able to accumulate a succession of mutations. One plausible theory proposes that what one of the first mutations really does is to cause «chromosomal instability». That is, the DNA becomes more fragile than normal, which would facilitate mutations to appear at a much higher frequency than usual. This instability is a feature that can be seen in most cancer cells, but it not known for sure whether it is a cause of the changes or a consequence.

All this gives us an idea of the real complexity of cancer, and the difficulty of finding a therapeutic strategy to restore everything that has stopped working in a malignant cell. But there is more to it: the generic name cancer is an umbrella covering a number of diseases that share the same biological principles listed above, but they are actually very different from each other. The genetic disorders defined, not only depend on the tissue where cancer appears, but on each patient and each specific case. Put another way: there are hundreds of paths leading to the same destination: therefore, to find a single treatment to cure all forms of cancer is, in all likelihood, impossible

Does that mean that we are losing the battle against cancer? Not necessarily. There are over a hundred types of cancer able to invade surrounding tissue and spread but, despite this, most of them tend to be localised, which greatly facilitates treatment using standard protocols: chemotherapy, radiotherapy and surgery. Statistics show that up to 90% of patients with localised cancer are still alive five years after diagnosis. Also, we have just reached a turning point: the results gathered over decades of biomedical research are beginning to bear fruit, and we are starting to design specific drugs to treat genetic disorders underlying certain types of cancer.

We have entered a new era in the design of therapies against cancer, and we are starting to see the first positive results. New compounds will gradually be added to our arsenal. This, coupled with the fact that we have started to identify genetic changes in the tumours of individual patients, means it will be possible to design drug combinations tailored to each case in the future, what we call personalised therapy. Thanks to these developments, one can expect that the coming years will bring revolutionary changes in the fight against cancer and this disease will finally be controlled. But it is important to remember that prevention and early diagnosis are fundamental when it comes to stopping the progression of cancer, and that depends on all of us, not just doctors and researchers. Therefore it is essential for everyone to be well informed, aware of what cancer is and how we can help to control it (Macip, 2012).

PhD in Molecular Genetics and Human Physiology and researcher at the University of Leicester (UK), where he leads a research group on cancer and ageing. He also teaches at the Open University of Catalonia (Spain). As an author, he has published several novels and science communication works.
@DrMacip 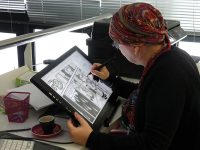 HOW TO CITE THIS ARTICLE:
Macip, S. (2014). Revealing Cancer. Hundreds of diseases under a single name. Mètode Science Studies Journal, 4.
doi: 10.7203/metode.77.2471
We use cookies on our website to give you the most relevant experience by remembering your preferences and repeat visits. By clicking “Accept All”, you consent to the use of ALL the cookies. However, you may visit "Cookie Settings" to provide a controlled consent. Read more
Cookie SettingsRejectAccept All
Manage consent