«We have an unconscious bias and, on a quick decision, we think the man is better»

Astrophysicist and discoverer of pulsars 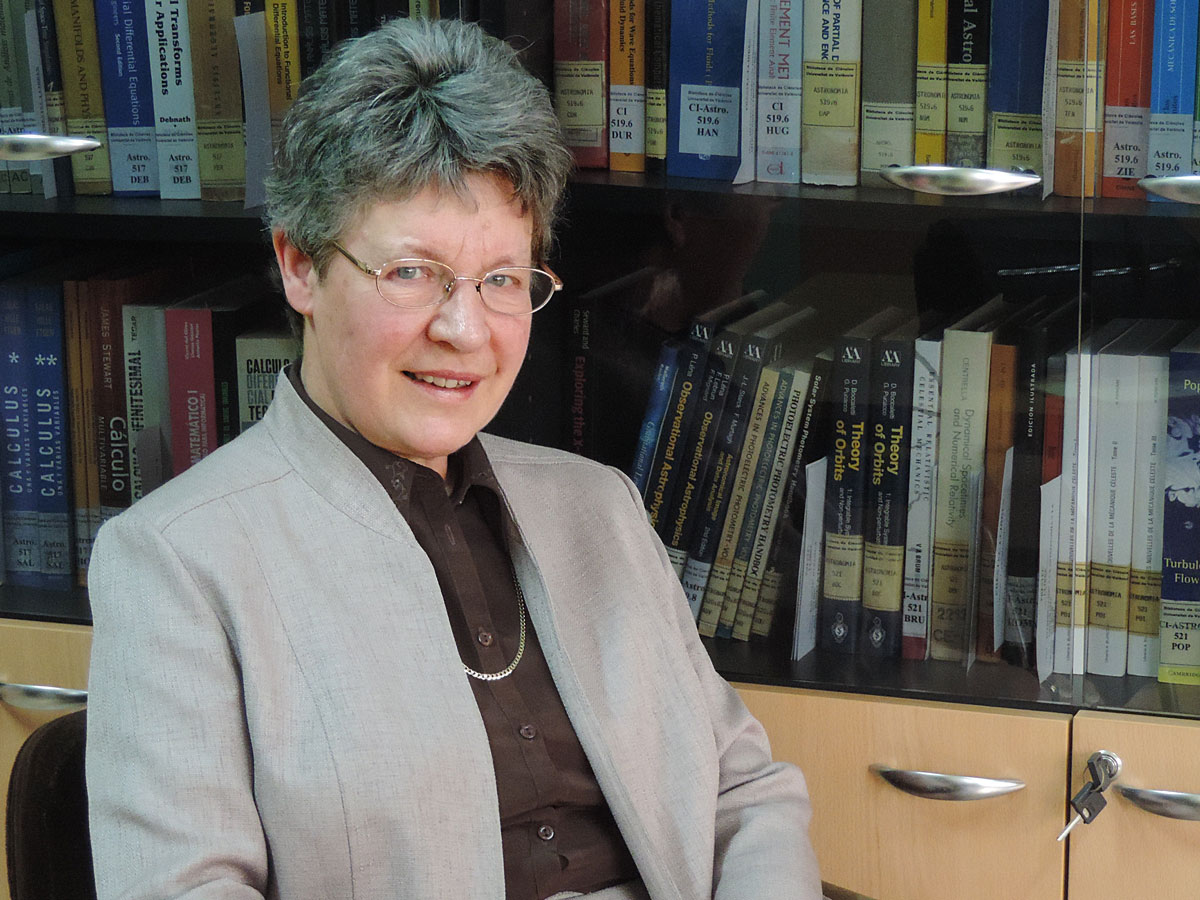 In the summer of 1967, the then PhD student Jocelyn Bell was analysing the records of a new radio telescope at the University of Cambridge when she detected some unusual signs, very slight but regular. One of the options that were being considered at that time was the possibility of it being a sign of extra-terrestrial life. Although Bell assured later that they never really thought that it was an artificial sign from another civilisation, neither had they evidence of it being a natural emission, so – not without a sense of humour – they named the signal LGM-1, which stands for “Little Green Men.” Eventually, these little green men turned out to be the first known pulsar and Jocelyn Bell Burnell (Belfast, Northern Ireland, 1943) came to see how her name was firmly and forever linked to these massive neutron stars. The discovery was published in Nature in February 1968 and Bell was able to finish her doctoral thesis without any other alien fright. «Such a discovery would have been too revolutionary», ensures the scientific laughing. Decades later, however, before the discovery of new planets – «more than we thought» –, she believes that there are more possibilities to find life off Earth: «I suspect that we are not alone.»

The smile did not fade from the astronomer’s face during the whole conversation. Jocelyn Bell speaks in a calm and quiet tone of voice, without any signs of impatience or exhaustion despite having a tight schedule for her trip to Spain. We meet at the Department of Astronomy of the University of Valencia, just after her date with other mass media and before her lecture at the Darwin Hall. Her visit has created anticipation among students and professors, who will later fill the auditorium where the astronomer will talk. There will not be enough seats, so the public will have to stand on the corridors of the hall. Such is the situation. A talk during which Jocelyn Bell will demonstrate that she is used to speaking in public and that it is extremely easy for her to show passion for what she has devoted her whole scientific career to: Astronomy.

Chance makes possible that our conversation takes place only a few hours before the announcement in Washington of the discovery of the gravitational waves. In the absence of official confirmation, the news run among the scientific community for days and the astronomer takes it for granted. «This discovery means a new way of seeing the universe, something that will help us to know more things that, otherwise, we would not be able to», professor Bell explains. Since the astronomer discovered that signal almost fifty years ago, a lot of things have changed in Astronomy, but for Jocelyn Bell the confirmation of the gravitational waves is an especially remarkable milestone: «It is very important, very exciting and it marks the beginning of a whole new world of possibilities.»

A discovery like this usually gets a lot of attention from the media and arouses some expectation among the general public. Professor Bell experienced that in her flesh after the publication of her discovery. What does a scientist feel when he or she faces discoveries of this type? « People think, you know, what was it like at the moment? But there is not a moment, and there was a month of worry and anxiety and puzzles», and like this she dismantles the idea – installed in everyone’s mind – of a scientist having a moment of revelation. Before an unusual signal like the one Bell detected that summer, the scientist explains that it is difficult to understand the magnitude of the discovery on the verge of being completed, because first you have to make sure it is not the result of an equipment malfunction, which means a thorough work of verification. «Discoveries are not quick. It is actually a long slow process», she sums up. 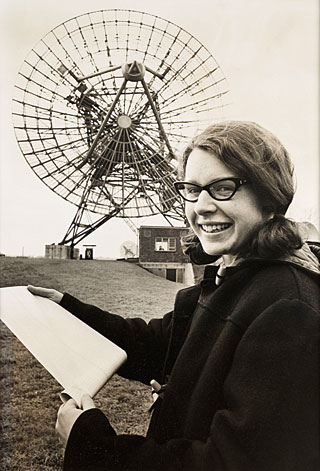 Jocelyn Bell is known as the discoverer of the first signal of a pulsar, but she is also the protagonist of an unfair episode in the history of the Nobel Prizes. In 1974, Antony Hewish, her doctoral thesis supervisor and the person responsible for the construction of the telescope Bell was using, and Martin Ryle were awarded with the Nobel prize for Physics for «their pioneering research in Astrophysics». The committee highlighted the development of the aperture synthesis technique of Ryle and Hewish’s decisive role in the discovery of pulsars. At that time, many voices arose criticising the fact the Bell’s role in the discovery was not recognised. The astronomer has always played this down. «They did not use to notice students», Bell assures, before a question that she has surely had to answer hundreds of times.

Later, Jocelyn Bell has received numerous awards and recognition, but the Nobel Prize keeps being seen by a big part of the academy and the society as the highest recognition for a scientist. After the question of whether she would really like to receive this award for her discovery, the astronomer thinks for a moment and answers: «It is a lot of responsibility for a young person, managing, handling that kind of situation, so it is possibly better that it did not happen.»

What the astronomer points out – and she believes that it is an issue that these types of awards should consider more everyday – is how much research has changed: «Until recently, nearly every prize has been for one or two, maybe three, people, not more. And, increasingly, we do our research in big groups». In fact, the article where the observation of gravitational waves is described, published in Physical Review Letters, is signed by more than 1,000 authors. And it is not the article with more signatories of this magazine. Last year, a publication about the Higgs boson managed by the scientists participating in the ATLAS and CMS experiments at the CERN had more than 5,000 authors. «If you are going to give the prize, who in the group you give it to. This has become such a serious problem that now some of the scientific societies, the learned bodies, are creating prizes for groups», Bell thinks.

A woman on men’s land

After the publication of the article, the media of the time piled news about what they considered the discovery of the year. Something made it even more relevant: among the signatories, there was a young female researcher. Some years later, in 1977, Jocelyn Bell explained her experience with the press in a speech at a symposium on Astrophysics in Texas: «The journalists were asking relevant questions like: was I taller or not quite as tall as Princess Margaret and how many boyfriends did I have at a time?». All this along with photographs of the scientist in all the imaginable poses: standing, sitting, analysing records, with her arms raised… «Look happy dear, you’ve just made a Discovery!» in the conference she remembered what she was told back then.

Jocelyn Bell’s early days in science were not easy. She studied Physics at the University of Glasgow, where she was the only woman in class. She has explained several times that she felt a bit lonely during those moments. It is not surprising if we keep in mind that she had to struggle against things like the «tradition» of the university, which was that every time a woman entered the conference room, students, men, stamped on the floor, knocked the desks, whistled and tried to make the as many nasty noises as possible. This, however, did not discourage her to continue her PhD studies in Cambridge to become an astronomer. How has the situation of women in science changed since then? «In Britain it has got a lot better. Initially it got better very very slowly. It has got better much faster in the last few years because the body that gives money for research in medicine has said to have one of our research grants, you must show that you are women friendly. Once money gets attached, people take it seriously», the astronomer explains, but nevertheless she still acknowledges that there is still a long way to go. «We have this unconscious bias and, on a quick decision, we think the man is better», she assures. «If you have to take a very quick decision between two curriculum vitae, who would you appoint? Everybody, men and women, say “the man”.» 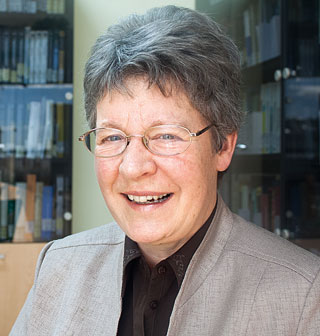 Once she completed her PhD studies, Jocelyn Bell got married and left the first line of research. A married woman with children working away from home was frowned upon at the time. But she never disconnected completely from Astronomy, and when she divorced and her son grew up, she decided to return to research and created her own research group. Is forming a family still a disadvantage for women who develop their scientific career? « Yes, because it is still the case that the women look after the young children. The woman has to give birth to the young children, but after that, the man could do it», Bell thinks. She is in favour of maternity and paternity absence systems like the one in Finland, where they promote that both fathers and mothers have long periods of time to take care of their babies. «they thought, “Oh, if a young man researcher goes away for three months, he will be a bad scientist when he comes back, he will have forgotten”. In fact, they discovered he is a better scientist when he comes back. I think because, even though he is looking after a baby, his brain is still working, and he has some space, his brain can be creative. More flexibility, less pressure, so he comes back a better scientist.»

Jocelyn Bell owns a collection of astronomical and space-themed poetry, and she admits that the night sky is a beautiful sight. But she assures that scientists do not write verses. She has devoted her career to observe the sky in a methodical and scientific way, surveying the signs and trying to decipher its secrets. Later, during her lecture at the Burjassot Campus, she shows us, however, that scientists – or she at least – do have the ability to observe their field of study from a point of view that goes beyond science. And, as if seeking to contradict herself, she finishes her speech with a thought, which is true but not less poetic: «Without them, we would not be here: we are the children of the stars.»