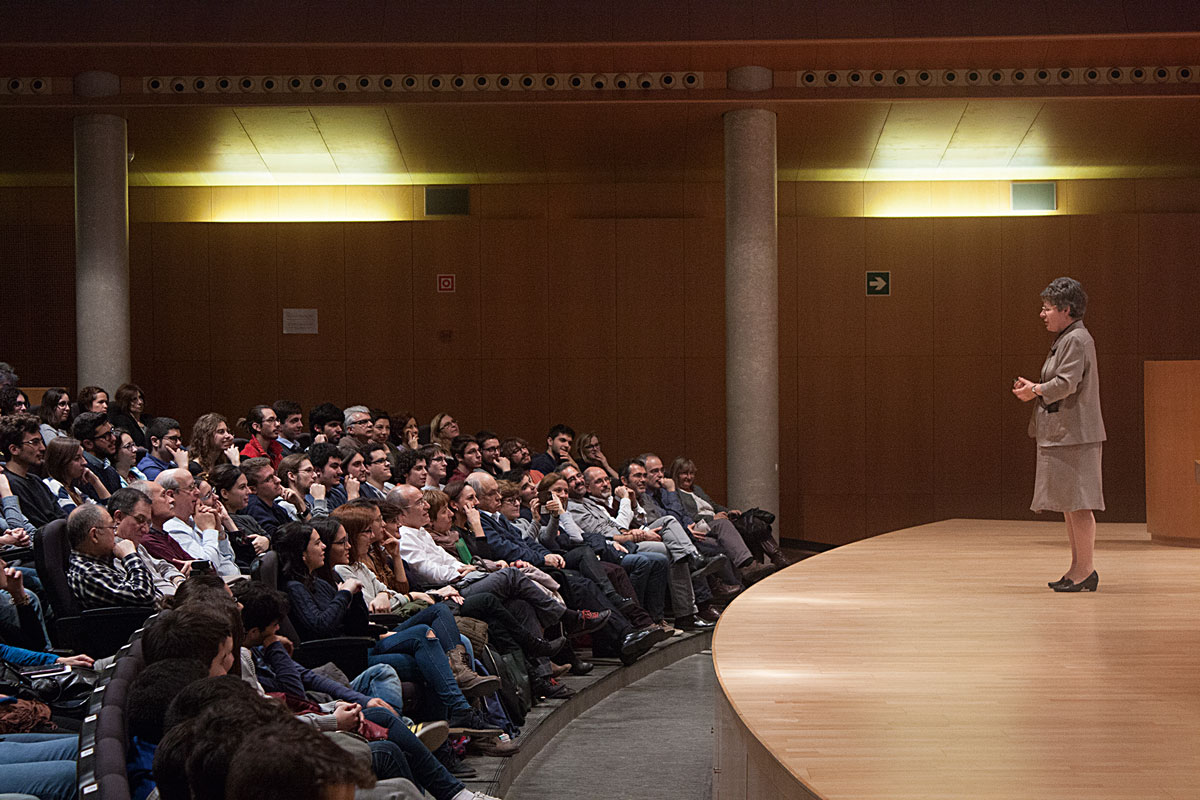 Jocelyn Bell, during her lecture at the University of Valencia, in the Darwin Hall of the Burjassot Campus, on 11 February 2016. Her visit coincided with the announcement of the discovery of the gravitational waves by LIGO in Washington. / Photo: Anna Mateu

The day 11 February 2016 will be difficult to forget for the members of the Faculty of Physics of the University of Valencia. Three major events took place at the same time to make it an ever-remembered day. First, one of the most important discoveries in Physics was going to be announced worldwide in a press conference by representatives of the LIGO (Laser Interfererometer Gravitational-Wave Observatory) from the headquarters of the National Science Foundation in Washington. The first gravitational wave had finally been detected.

The very same day, people were celebrating the International Day of Women and Girls in Science for the first time, a key goal to promote the full participation in equal conditions for women and female students, in science training, employment and decision-making processes, erasing every form of discrimination against women.

«Jocelyn Bell is an innate discoverer of any type of signals, of those that are here waiting for someone to find them»

Last, but not least, the astrophysicist Jocelyn Bell was visiting our faculty and delighted us with enthusiastic and educational oratory in a multitudinous conference where she explained that we are part of the stars, whose signals she has thoroughly observed for more than forty years.

Without a doubt, the combination of these events in the life of Jocelyn Bell will make her remember especially her visit to Valencia, as she said to us recently. Being able to see her face full of excitement before the announcement of the discovery of the gravitational waves will also be difficult to forget for those who could share the moment with her, because Jocelyn Bell is a difficult person to forget. Her proximity and enthusiasm for science and her enchanting and precise wisdom in all her projects are virtues that characterise her.

It surely was not easy for her living one of the biggest injustices of the science world: being left out of the Nobel Prize, even though she herself was the one who, patiently, discovered the first signs of a pulsar, massive neutron stars that rotate at high speed. In 2004, she wrote an editorial for the journal Science, «So few pulsars, so few females,» where she admitted that maybe her youth and female condition influenced in not being awarded with the Nobel Prize for Physics, which her doctoral thesis supervisor and her department director received in 1974. At that time, the British press was unfairly more interested in her private life and physical appearance, than in her genius and scientific discourse. Years later she said that back then she felt more like «a piece of meat.»

But she kept looking for the signs, finding the reality of a science completely made for men. When she began her secondary education she witnessed how students were divided in girls – who went to home economy lessons – and boys – attending science laboratory lessons. She complained and talked to her parents, and thus the centre allowed her and two other girls interested in science to attend those classes. She got the best grades in her class. For this reason, as a brilliant student in science, she decided to study Physics at the University of Glasgow, where she was the only woman among 49 men.

After studying her PhD and discovering pulsars, she stayed beside her husband during his diplomatic career, so she left the front line of research, but she kept developing her passion for Astronomy in the universities of the cities where she lived. Later, when she divorced and her son became independent, she was able to create her own research group and devote herself to investigate the signs of the binary stars full-time.

Science «is for men», it is played «by men» and dominated «by men», as she always says, but «the success of science lies in diversity». You need all the talent you can get to make science stronger, more creative, flexible, tough and successful. But this diversity is linked to some discomfort and unease, and it is difficult and tedious to handle. But it is not impossible, although it is necessary to strive for it, according to Jocelyn Bell, who tells us that «the limit is cultural and it is not in women’s brains.»

Jocelyn Bell is an innate discoverer of any type of signals, of those that are here waiting for someone to find them. Signals from the universe and human signals, bright or dim, from women excited for science. She is always there to support them and encourage them to move forward. Thus, as she said to me, she is proud that 50 % of students in her Astronomy courses at Oxford are girls. Thank you, Jocelyn Bell!