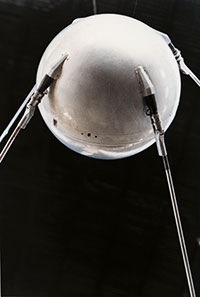 The British writer J.G. Ballard claimed that in order to be able to write a fiction novel set in our modern world one had to use completely different techniques than the ones used by the 19th century writers. In the 1950’s, when everyone was able to listen to the Sputnik’s messages on the radio, the world had become a different place.

Techniques certainly evolved, but references to Sputnik, to satellite dishes or outer space are very few —but for science fiction works, obviously. Curiously enough, its name is now in style—if it ever was out of style— thanks to Haruki Murakammi, a Japanese writer who published Suputoniku no koibito back in 1999— translated into English as Sputnik Sweetheart. This title refers to one of the main character’s misinterpretation of the word «beatnik», which she takes for «sputnik», when referring to Jack Kerouak. But the satellite is also used as an occasional metaphor at some points in the novel.

Some poets have also used this satellite symbolism, like the Italian poet Salvatore Quasimodo, who died a year after the Sputnik’s launching, who wrote in a poem that God had placed the stars in the sky and, billions of years later, mankind had added some more stars to it.

The first cosmonaut, Yuri Gagarin, was also the inspiration for another poem written by Evgueni Evtuchenko, a poet from Siberia.

For his part, Charles Dobzynski, a French writer born in Poland, published in 1963 L’Opéra de l’espace, where the author talks about the difficult task of combining poetry and technology.

«It is not easy to find novels with references to Astronautics written by renowned authors. However, some very prestigious authors, like Paul Auster, have introduced them»

It is not easy to find references to Astronautics in novels written by renowned authors —other than science-fiction authors, of course. But some very prestigious authors have done so. Paul Auster wrote some pages on the first travel to the Moon in his novel Moon Palace. Antonio Muñoz Molina makes poetry of space travels in El viento de la Luna (Moon wind), describing the feelings the astronauts might have felt and those of the people following their steps kilometres away.

But the French Jean Echenoz has written the most elaborated literary work related to space travels— The three of us. It is an ironic, delicate and captivating novel, all at once, in which he uses an accurate language that poetically describes an earthquake, for instance. The main character is a scientist that becomes involved in a space mission, where he will have an affaire. With the prospect of establishing human settlements in the Moon and in Mars and the development of space tourism, becoming an astronaut can eventually be something quite normal. Echenoz was the first one to let a love triangle develop in the calmness of a spaceship. 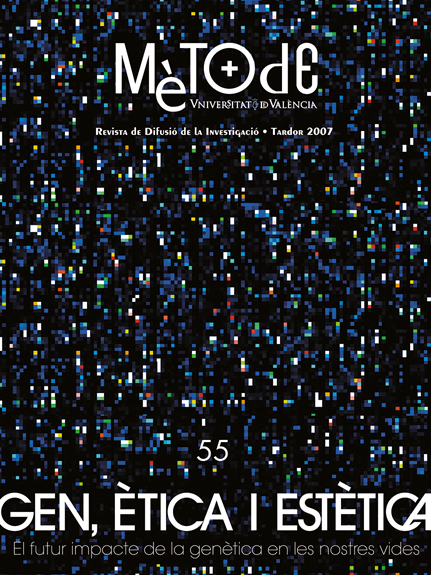 Future impact of Genetics in our lives