Why are honeybees dying out? 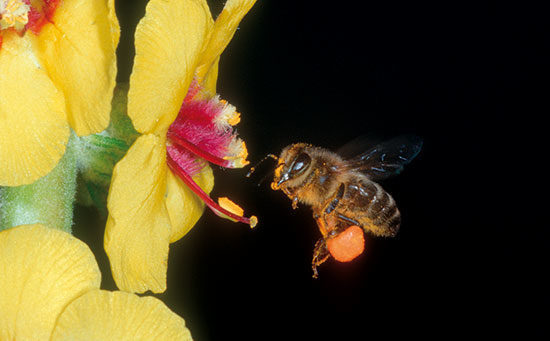 Wild bee colonies have become virtually extinct in developed countries, and researchers and apiculture technicians are trying to solve a complex problem. In the picture, a honeybee collecting pollen from a Dark Mullein (Verbascum nigrum) flower. / E. Simó

Why are honeybees disappearing? In 2010 we already knew that the acarid varroa parasite was one of the main causes for the extinction of bees. But also then, we could already take notice of the effects of neurotoxic insecticides on honeybees, mainly of those known as neonicotinoids, but also of others known as phenylpyrazoles, as one of the main factors to take into account in the current worldwide crisis in apiculture.

These two years have been of use to reaffirm an already evident fact for many technicians and apiarists. Since their launching into the pest control market in the 1990’s, these insecticides have been responsible for a great deal of honeybees’ deaths, and, by extension, the deaths of other pollinator insects.

«Known active substances like imidacloprid, thiamethoxam, clothianidin and acetamiprid have been very much used for conventional agriculture all over the world»

Known active substances like imidacloprid, thiamethoxam, clothianidin and acetamiprid have been very much used for conventional agriculture all over the world. The first one of them has been one of the bestselling in the last few years, and there are more than 50 commercial products, only in Spain, applied on a wide range of crops in which it is difficult not to find imidacloprid residues, if only a few parts per billion, all over agrarian fields. One has to take into account that they are very persistent substances, thousands of times more toxic than DDT and often applied in a way in which they remain longer in the environment —diluted in drip irrigation waters or when used for the production of coated seeds.

Honeybees can suffer acute intoxications and die by the hundred in front of the entrance of their colonies and also in the country. This is the case of the bee in the picture. It depicts a serious intoxication consequence of a nectarine treatment with thiamethoxam when flowering in the outskirts of Montesa (Valencia) in February 2010. There have been similar cases in Germany with the use of clothianidin. 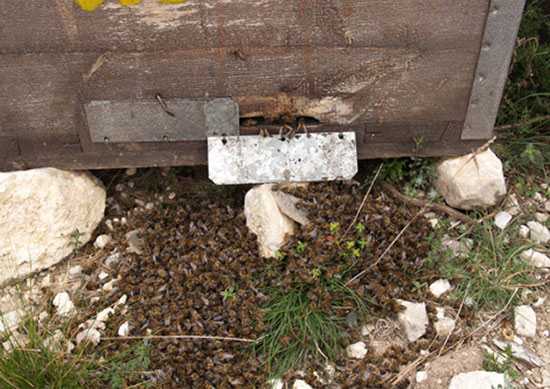 Poisoning of bees because of a treatment with thiamethoxam in nectarines in February 2010, in Montesa (Valencia). / Fernando Calatayud

But the newest and most disturbing aspect of the use of neonicotinoids is that honeybees can come into contact with sublethal doses that makes them suffer from a sensory deficit and thus die disoriented in the fields, unable to find their way back to their colonies. This is exactly what French apiarists denounced by the end of the 1990’s when their colonies lost bees stealthily, not being obvious at the entrance of their hives, and in few weeks they became depopulated during the blooming of sunflowers born out of seeds coated with imidacloprid. Apiarists from northern Italy have also been affected near treated cornfields.

The research on the effects of the sublethal doses and its consequences on the colonies in the long run have been complex and lengthy, but nowadays evidence is very clear. During the last fifteen years there have been more apiarists affected by this all over the world. Organisations for environmental preservation and researchers have also demanded an emergency intervention of governments to overcome the obstacles imposed by multinational companies that manufacture and sell these products.

Negligence on the part of the national authorities are made evident in the Spanish Ombudsman reports, who, since 2008, has been telling the Spanish Environment Ministry to revise the administrative authorisations of this kind of insecticides, or in any case to ban them because the imposed conditions for their authorisation are not kept in everyday practice and are very dangerous for bees and other pollinator insects, and are against the principles of integrated pest control. Following this argument, the Ombudsman reminds that the Official Registry of Pest Control Products imposes a previous condition for the authorisation of this formulations: “In order to protect the bees and other pollinator insects, do not apply during the flowering period of crops”. In reality, this condition is not kept, not even by chance, and the administration does not control its performance.

Since the 90s neurotoxic insecticides have been introduced in the pest control market and this has caused the high index of mortality in bees. / Fernando Calatayud

Thus we come to the climax of this whole process, the publication in Science, in the April issue, of two works that reaffirm the effects of the neonicotinoids. One of the works showed the negative effect of imidacloprid on the colonies of Bombus in England. The other shows evidence of the effect on honeybees of contacting these sublethal doses of thiamethoxam —disorientation and the risk it implies for the survival of the colonies.

It is not a matter of chance that, last month, EFSA (European Food Safety Authority), which until very recently had shown very little interest for neurotoxic insecticides, issued a report in which clearly recognises that the current methodology of evaluation of the effects of the pest control products on bees is not enough and has to be revised; that we have to take into account the effects on other hymenoptera like Bombus and lone bees; that in protocols sublethal doses, long term effects on colonies and synergies, when applied two or more active substances, have to be taken into account. It would be worth considering, as Noa Simon, apiculture coordinator of the COPA-COGECA (European Agricultural and Cooperative Organisations Committee) does, that if the evaluation of the toxicity of the new neurotoxic and systemic insecticides have not been properly carried out and therefore, its authorisation has to be revised. Does this mean that the use of these products will be suspended until the studies on toxicity on bees and Bombus are finished? It would be about time for European agriculture authorities to release themselves from the yoke imposed by the almighty agrochemical industry.

Read the article What Happened to All the Honeybees? in the isuue number 66 of Mètode.