Why do Oil and Water Freeze Differently? 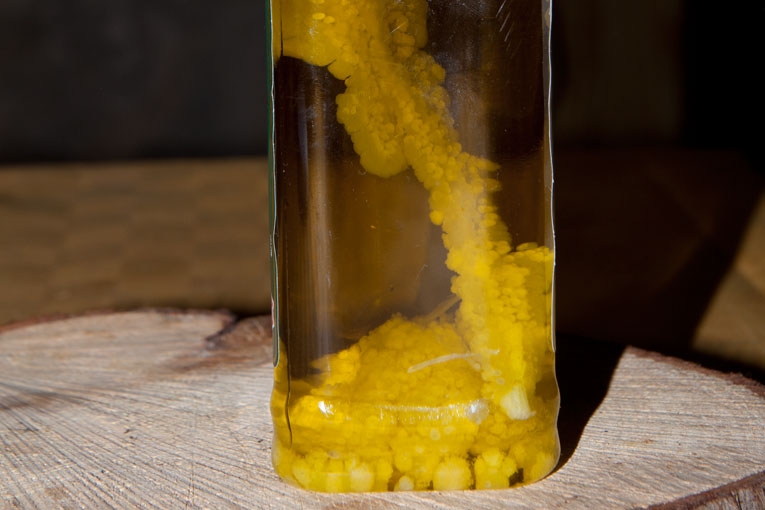 Both olive oil and drinking water are basically constituted by a specific type of molecule—triacylglycerols (commonly known as triglycerides) in the former case and water in the latter case. Water and olive oil do contain dissolved substances, but in such small quantities that they hardly affect these liquids in the cooling process. While in water we only find one kind of molecule, in olive oil we find different types of triglyceride molecules, and that is why, water’s freezing point is 0ºC, while olive oil’s freezing point ranges from 23ºC to 5.5ºC. In the liquid state, water molecules —H2O— are in continuous motion: they spin around, move and bounce around.

In the gas state, molecules are very far from each other, but in the liquid state they are very close to one another due to the forces of attraction between them. When water gets cold, molecules gradually reduce their motion speed, until it reaches 0ºC, when the liquid solidifies. In ice, water molecules do not move, nor spin around —they remain calmed and organised. However, in ice there is still movement: hydrogen atoms swing around in their equilibrium state, and the lower the ice temperature is, the less they oscillate. The freezing point of a liquid depends on the magnitude of the attractive forces between the molecules that constitute it.

We have already said that in olive oil we do find different kinds of molecules. Actually, triacylglycerols are relatively complex molecules. Their nucleus comes from a molecule of glycerine that is connected to three fatty acid molecules. The different triacylglycerols are differentiated by the fatty acids they contain and their connection in the glycerine nucleus. Within olive oil, the most abundant fatty acids are oleic acids (O), palmitic acids (P), linoleic acids (L) and stearic acids (S). And, if we identify one triacylglycerol with the corresponding letters of the fatty acids it contains, following the order in which they are connected to the glycerine nucleus, the most common triglycerides in a typical olive oil are OOO (62%), POO (30%), OOL (4%) and SOO (2%).

What happens then, when olive oil gets cold? Each one of its triacylglycerols has its own freezing point: OOO: 5.5ºC; POO: 18ºC; OOL: -2.8ºC; and SOO: 23ºC. Therefore, when it freezes, crystals of these compounds start to appear depending on their freezing point. That is why we find small quantities of waxy solids at 23ºC, and that is why oil is solid when temperatures are below 5.5ºC.

Finally, it is important to mention that, the presence of these whitish waxy solids in olive oil is a completely natural process and it is not related to the quality of the oil— if it reaches 23ºC, it will be completely liquid again.