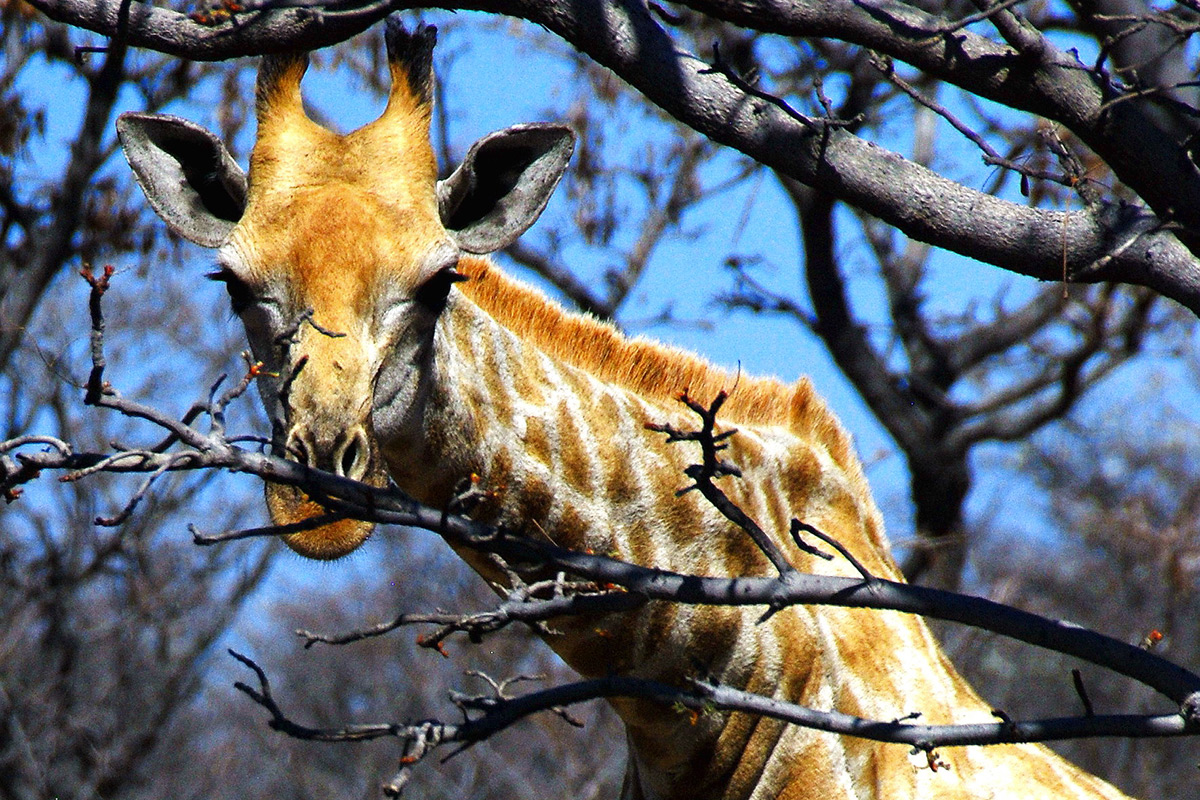 In September of 2011 the 6th Science Centre World Congress was held in Cape Town, South Africa. Some of the participants, among which I was, had the privilege to make a four day visit to Welgevonden Park (meaning found well in Afrikaans). The reserve has 120.000 hectares of pristine savannah and is only 300 km away from Johannesburg. This season of the year is the best one for the observation of animal wildlife, when spring is just about to start and only before the first rains. A shy giraffe watches the intruder, crouched down in the naked fractality of a tree’s foliage. Maybe it was not aware of the fact that its long legs were showing under the branches and that its head can be made out from the branches because leaves have not bloomed yet. Rhinoceroses calmly graze in the wide meadows of golden grass. Elephants eat off the ground and off the trees not worrying about the damage they cause only by walking. A cheetah breathes heavily under the shadow of an acacia tree next to the impala it has just beaten down. There is not even a drop of blood. The prey looks as if sleeping and it could be said that the predator is protecting its sleep. Baboons take naps under the shadow of the trees as if exhausted after a long meeting. A stately male lion is patrolling to make sure no intruder is hanging around its dominions (that is what he is «paid for»). Now he lays in between some bushes, unnoticed by a group of nervous warthogs. This kind of African wild boars eat green and tender grass that sprouts from the ashes of a recent fire, but the wind blows towards the lazy lion that has decided that now it is not the time to attack other animals. A group of gnus, zebras and antelopes start to run. All of them run away in the same direction falsely alarmed by the same creature.

The immense joy we feel when spying on wildlife might be an ancient genetic memory from the time we were a part of it. However, the great documentaries usually show a greatly fake view of what can be observed in situ. Everything shown is true (because it is filmed), but the atmosphere is fake because concentrating violent prey-predator scenes, for example, distorts the concept of wildlife as a whole. «Observation alters what is observed» is not an exclusive statement for quantum mechanics. But, in the same way a scientist observes trying not to alter anything of what is being observed (objectivity principle so as to achieve the highest degree of universality possible), the naturalist also enjoys animal behaviour in its purest essence in awe. That is what a 200-400 telephoto lens is useful for, among other things…

That is what were at when we heard the news — two poachers supplied with everything needed to kill rhinoceroses have been arrested today by rangers from the Welgevonden reserve. The shoot-out has been fierce and dangerous. While some try not to disturb, others risk their lives for the alleged aphrodisiac powers of rhinoceroses horns. Nevertheless, there are some who are worse than an offence committed for ignorance. Hunting is forbidden at Welgevonden, but in many other reserves hunters from all over the world are welcomed to come and take a buffalo, a lion or an antelope… Come, pay!, shoot and win a trophy to hang on your walls. Those who pay for the right to kill are ethically more difficult to understand than those who kill for the right to charge. Poaching can be fought with a little bit of education. It is all about convincing others that tiger bones and rhinoceros horns are not useful to treat erectile dysfunction. It is very difficult, but can be achieved. However, those who hunt as a sport defend their activity as culture and tradition. The expression sport hunter is in itself a contradiction. The thrill of finding a lion’s head in a clearing is far greater than finding it hanging on a wall. Is this simple thing so difficult to understand?