I am writing these words at the beginning of May and I do not know if they will be out of date when Mètode is published. But I will proceed, because as of today I have not yet read an analysis of the impact of COVID-19 on science journalism. Perhaps it is still too early, or perhaps because science journalists are among the few professionals who have seen their workload increase dramatically during this nightmare and we are not in a position to contemplate our existence right now. «How are you doing?» I messaged an Argentinian colleague, and he replied, «Trying to capitalise on the pandemic». «Sorry I didn’t answer earlier, I’m swamped», said another, days after I sent him an email. «I’m on TV tonight», said another. 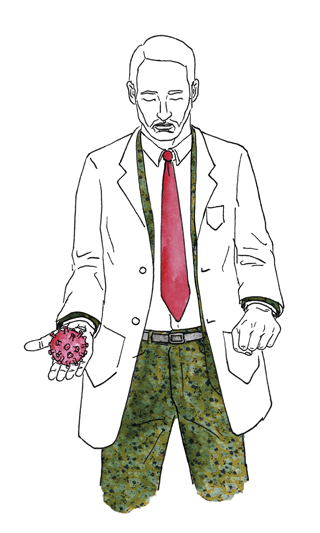 But beyond the obvious increase in the demand for scientific information regarding COVID-19, I think there are several reflections worth putting together in a text, even though we have already been tweeting about them.

For me, one of the most important is that, for the first time in the field of biomedicine, we are telling the story of science in detail as it is being done, not after it has been published. We saw something similar with the search for the Higgs boson, the sequencing of the human genome, and in some space missions. But so much constant attention to so many different projects is unheard of: we are watching the experimental phases of different vaccines and the trickle-down of discoveries about the physiopathology of the disease, as well as pre-published work on whether infected people have more or less immunity after they recover, whether nicotine can protect from the virus because it engages the same cell receptors, or whether children are very contagious or not at all. For some, all this was puzzling at first, since science is often presented to the public when it is already finished, reviewed, and published, with a much lower degree of uncertainty. This rigour is what makes it so reliable. But in a crisis like the one we are living, there is no time to lose and it is time to inform and make decisions without the level of trust that researchers like to have. This is life.

«For the first time in the field of biomedicine, we are telling the story of science in detail as it is being done, not after it has been published»

One element that has generated quite a lot of distortion has been preprints: pre-publications of hypotheses from scarce data and without having finished the experimental phase – nor having passed the peer review process – but which serve to share ideas among the scientific community and speed up the process. The reason for the confusion was that, especially at the beginning, they jumped to the media as if they were proven results and everyone – Trump, for example – interpreted them at their own convenience. Some voices within our profession advocated ignoring preprints because they were not peer-reviewed, but I disagree with this position. I believe that, since the rise of scientific preprints in biomedicine is here to stay, a good science journalist will not neglect what is not peer-reviewed, but will have the tools and instinct to separate the grain from the chaff, contrast information, and present it in context.

«Now that COVID-19 has forced us to open this door, I bless preprints and being able to talk about hypotheses as well as results»

I have long complained that scientists are so protective of their work and claims that not talking about it until it is finished makes science more aseptic and prevents stories from being told with any sense of wonder. So, now that COVID-19 has forced us to open this door, I bless preprints and being able to talk about hypotheses as well as results. And, above all, I like the fact that we can include nuances of the research like whether a vaccine is in phase 1 or phase 2 and people will listen to them because they are part of a story that they think is interesting. It looks to me like a unique opportunity.

«A good science journalist will separate the grain from the chaff, contrast information, and present it in context»

This obviously involves a risk, which is the appearance of distorted information or information that lacks the minimum empirical support required. We will need more professionalism on our part and, as well as the professionalism of our fellow generalist journalists, who will also have to learn a little about how science works. But this is good. Then there is the issue of hoaxes, which also affects us directly. I always explain that, when I started in scientific communication, before social networks existed, the best strategy against hoaxes or conspiracy theories was to ignore them and let them fizzle out on their own. But nowadays any fake news can be viralised in platforms like Facebook, WhatsApp, or YouTube. Until these platforms improve their filters, science journalism can no longer stay on the sidelines and limit itself to reporting only what science is saying. It must also act – as made clear in the COVID-19 crisis – as a watchdog for science-related news. There are several science journalists who, because of their excellent work during this crisis, are becoming references for other generalist journalists, and their voices are influencing the flow of information more profoundly than it seems. I have not been particularly active, but I have still noticed this effect.

The reader might notice that I am talking about scientific journalism, rather than dissemination or the work of active researchers. Both come out of this crisis stronger, no doubt about it, but I think that the strongest impulse – albeit a silent one – has been the one experienced by journalism. In terms of dissemination, the communicators who have redirected their topics to COVID-19 have gained greater attention and new followers, but the quality has been irregular and public attention to other areas of science has fallen into disarray. We did not broadcast the season of El cazador de cerebros partly because we were halfway through the recordings, but also because perhaps it was not the time to talk about palaeoanthropology. In June I published the book A vivir la ciencia, which I recommend because I sincerely believe that it is a worthwhile reading. But I still wonder if that corner of interest towards science in every person’s mind is already packed with issues related to COVID-19.

As for the researchers, their voices have certainly become much more present, but I really do not know what image will remain of them after the crisis. There is a risk that some areas of science will be considered less important and will be neglected, or that there will be some scepticism that they are «the great heroes of the twenty-first century» and «the key to tackling humanity’s great problems», in the sense that, despite having so much biotechnology and artificial intelligence, in the first few months the response was only mass confinement and use of soap and water. Everything will depend on the result. Science will no doubt also be affected (in general for the better, but not in all areas) by the pandemic.

What is clear is that the word science has never been as present in the media as it was during the COVID-19 pandemic, and if this continues to be the case in the coming months, it is very likely that something will remain even after the coronavirus disappears. There will be other medical issues to exploit, other challenges to face from a science and technology perspective, other stories to get involved in, and a community of well-positioned science journalists who can make their voices and writings more powerful than they were in the BC era (Before COVID). There are many lessons to be learned, but one is that narrating science in real time generates much more interest than explaining it after the fact.