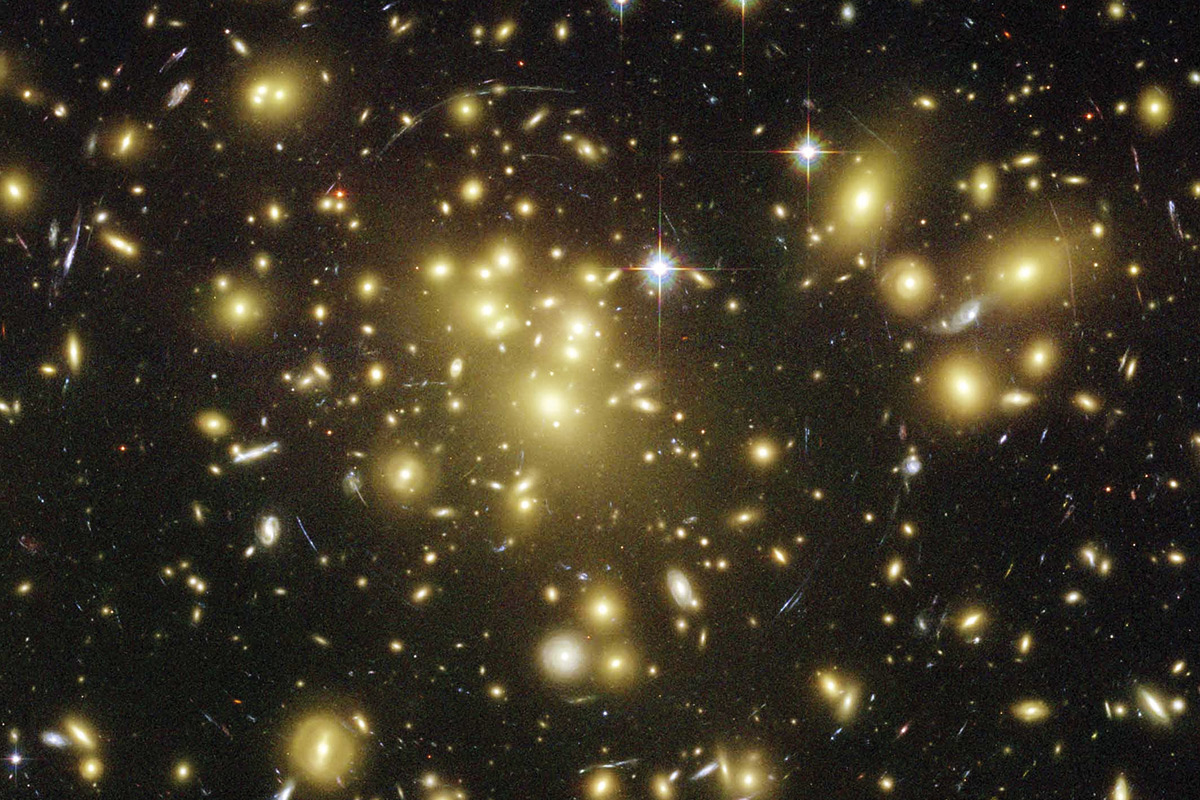 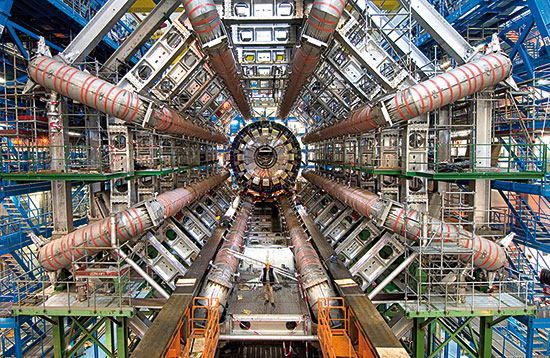 The Large Hadron Collider particle accelerator at CERN (Geneva). In the future, this huge scientific installation could reveal the nature of dark matter. / © CERN

Over time, alchemists began to differentiate the elements: iron for weapons and agricultural tools, bronze for the first coins, gold for jewellery, and so on. In the nineteenth century, the Russian chemist Mendeleyev put everything in order by establishing the periodic table: hydrogen, helium, lithium, beryllium, boron, carbon, nitrogen, oxygen… with over a hundred elements. Almost all the chemical elements that make up our body are molecules that were formed billions of years ago inside stars that no longer exist. The energy source of stars is thermonuclear fusion, a mechanism that transforms hydrogen into helium first and then gradually into other chemical elements like carbon, oxygen, silicon and iron. The latter is the heaviest element, which is formed during the quiet stage of stellar life while gold –used to make jewellery– and uranium –found in nuclear reactors– is produced when the life of a very massive star draws to an end. This is due to thermonuclear reactions occurring in supernova explosions, which also flood the interstellar medium with the chemical elements formed in the interior of these stars. New generations of stars are born from the remnants of these explosions, like our Sun, and many of these embrace planetary systems –like our solar system– and perhaps life too –like that on Earth–.

But as Shakespeare says through Hamlet: «There are more things in heaven and earth, Horatio, thanare dreamt of in your philosophy». Indeed, current cosmological observations suggest that only 5% of the universe is ordinary matter while another 25% is comprised of a kind of matter that is very different from any we know of, the nature of which remains a mystery: dark matter. Large particle accelerators like the LHC (Large Hadron Collider) at the CERN are searching for this dark matter and may find it one day. Stranger still is the concept of dark energy, which makes up 70% of the total and must, therefore, be the dominant component of the matter and energy comprising the universe.

«Are we continually re-editing a model of the universe –perhaps mistaken– to accommodate new and unexpected observations?»

The existence of dark matter was postulated many years ago. In January 1925, the American astronomer Edwin Hubble showed that the Andromeda galaxy was a system like our own, and therefore not part of the Milky Way. After this, hundreds of galaxies were catalogued, then thousands, and today millions of these huge concentrations of stars, dust and gas have been logged, many of which contain hundreds of billions of suns. Soon astronomers noticed that galaxies seemed «sociable» –gravity makes them this way– and they cluster to form larger structures. Indeed, photographing large areas of the heavens shows clusters consisting of hundreds or thousands of galaxies. One of the most nearby and spectacular is the Coma cluster, about 325 million light years away. Back in the thirties, the Swiss-born Californian-based astronomer, Fritz Zwicky, tried to determine the mass of this cluster and concluded that, given the speeds at which galaxies move within it (like bees in a swarm) the only way to explain why the cluster does not disintegrate is that there is a lot of invisible material holding it together gravitationally. Thus, he postulated the existence of dark matter for the first time, such that its contribution to the total mass of the cluster greatly exceeds that of the sum of the mass of the galaxies comprising it. A great deal of other evidence has been gathered since then to justify the necessary role of dark matter in the cosmic inventory, but its nature remains a mystery. 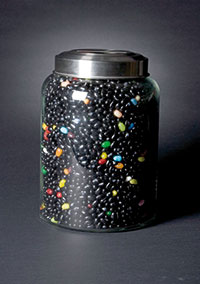 Like jelly beans in a jar, the universe fundamentally contains dark matter (the black sweets, representing 95% of the contents). Only about 5% of the universe is composed of ordinary matter (the same proportion as the coloured sweets). / © Fermilab

On studying supernova explosions in galaxies located billions of light years away, cosmologists have concluded that their intensity is dimmer than expected. In fact, to explain this observation, it is argued that the distance travelled by light from supernovae to reach our telescopes is greater than previously thought, and this is understandable if the universe is expanding. The reason for this accelerating expansion is unclear. Although they are unsure of what it actually is, cosmologists talk of dark energy. This concept refers to something that is not matter and, therefore, cannot be detected through its gravitational force, nor does it emit radiation; a kind of energy associated with space itself, which acts as a «repulsive gravity» and may be responsible for cosmic acceleration.

So, like it or not, 2,400 years after Aristotle, following in the footsteps of those ancient Greek thinkers and philosophers of nature we –like they– still talk of quintessence: the baffling, dark side of the universe. Despite everything we have learned, we only really know the tip of the iceberg, the rest, the greatest part of the universe, remains a mystery.

Before Copernicus, astronomers made increasingly complex geocentric world models, adding new spheres, epicycles, deferents, and so on, in an attempt to describe phenomena, rather than explain them, so historians say. But they were so patently complicated that Alfonso the Wise stated that «if he had been present at the Creation, he would have proposed a simpler design». Are today’s cosmologists doing something similar, postulating the existence of mysterious components to explain the universe? Are we continually re-editing a model of the universe –perhaps mistaken– to accommodate new and unexpected observations? Is it necessary to scrap the model and look for alternatives, perhaps a paradigm shift? Time will tell, but in the meantime scepticism may be advisable.