A sad end has the most robust health, continuously spurring sickness on, which lives near, with just a wall separating them.
Aeschylus, Agamemnon 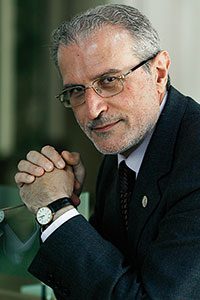 The interest in health has accompanied humans since their first steps. Medical knowledge, traditionally held in the hands of a few scholars educated in the subject, has been increasingly demanded by a society that views health as a basic right.

From this point of view, the communication of medicine can be interpreted in both a therapeutic and a democratising sense. Therapeutic, because the fact of knowing an illness better gives the patient more useful resources when confronting it, and also because it allows him to integrate himself more adequately into the medical team that is treating him. Medical communication also has a democratising aspect because it contributes to the circulation of scientific knowledge beyond the circles of the medical profession, and more rigorous information may contribute to facilitating the prevention as well as the elimination of myths and misconceptions.

Medicine and, above all, certain diseases, have been getting closer to an increasingly varied audience. Doctors have basically taught through books: a few more scholarly, for colleagues and students; others more aimed at the public in general, with a more informative character. In Spain, the tradition of intellectual doctors gave great leading figures like Gregorio Marañón, Pedro Laín Entralgo, or Santiago Ramón y Cajal, who always took into account the social aspect of medicine in their books.

«Medical communication also has a democratising aspect. More rigorous information may contribute to facilitating the prevention as well as the elimination of myths and misconceptions»

Doctors have spoken and written about the most prominent social diseases in every age. There is no doubt, that is what cancer currently is. Thus we find books with the ambition of covering the history of the disease, such as The Emperor of All Maladies, by oncologist Siddhartha Mukherjee, winner of the 2011 Pulitzer Prize for General Nonfiction, which was cited in the inaugural speech of our Honorary Dr. Baselga. There are others that present the history of the drugs that have been a turning point in the treatment of some types of cancer, as does the one by Doctor Daniel Vasella entitled Magic Cancer Bullet, a concept from the chemotherapy coined by Nobel Prize winner Paul Ehrlich. In some cases, the historical view is left aside to focus on what directly concerns the patients and their families. Such is the case of books like Cáncer. El fin de un mito (“Cancer. The End of a Myth”), by oncologist José Ramón Germà Lluch, or Cáncer. 101 preguntas esenciales (“Cancer, 101 essential questions”), by Doctor Ricardo Cubedo, fruit of his collaboration in the press, where for a time he answered questions raised by readers. 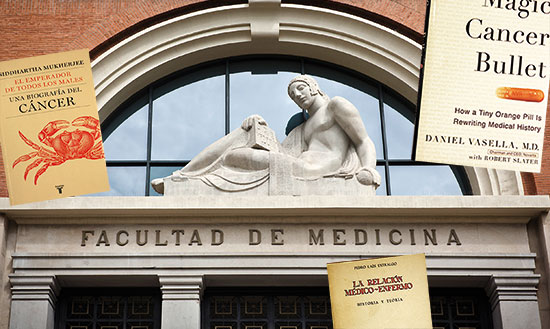 But it is not only the Doctors who have written and still write about cancer. It is also the patients who take the floor to give us another vision, indispensable and complementary. They are those who narrate in first person the meaning, not of the pathology or the treatment of the disease, but of both social and individual aspects. Some testimonies and thoughts of patients have become classics, like Susan Sontag’s Illness as Metaphor. Other breast cancer patients, such as Rose Kushner, author of Why Me?, plays a more active role in her disease’s treatment. Kushner became a well-known activist against systematic radical surgery that prevailed at the time.

«Without a doubt, the best remedy for the exalted mood, or to appease anxiety, is reading. Books have always helped us understand and get through the disease with less trouble. In this sense, they are likely the best medicine»

Another type of patient testimony can be found in literature. Novels such as Cancer Ward, by Aleksandr Solzhenitsyn tell us of the disease from a perspective that transcends the self to become a choral portrait. Based on his own experiences as a cancer patient at a clinic in Tashkent (in the present Uzbekistan), the novel by the Russian author describes the centre and its inhabitants’ routine.

Nowadays, when so much is spoken of the patient’s empowerment as a person who has a greater weight in therapeutic decision-making – and this is certainly the spirit of the law of autonomy of the patient and of the «informed consent» in the clinical trials – is more necessary than ever this activity in communication. But a rigorous and entertaining communication, one that the reader may easily understand, is difficult to achieve and does not always get the academic recognition that it deserves. For this reason, we have to enthusiastically greet every new book that is published in an effort to disseminate medical knowledge among those who are not specialists, and this new Mètode issue too, which has as always a balance between the substance and form, between ethics and aesthetics, between science and art.

Without a doubt, the best remedy for the exalted mood, or to appease anxiety, is reading. Books have always helped us understand and get through the disease with less trouble. In this sense, they are likely the best medicine.

Principal of the University of Valencia.