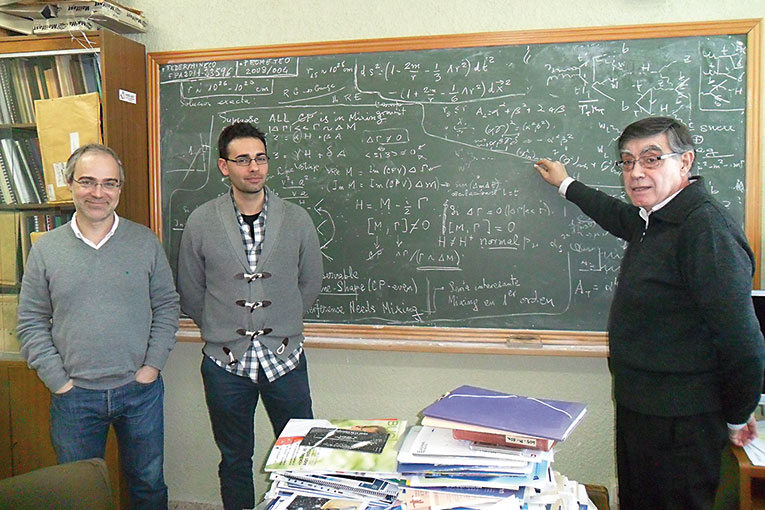 From left to right, Fernando Martínez Vidal, Pablo Villanueva and José Bernabeu, from the Institute of Corpuscular Physics (IFIC) of the University of Valencia. / Alexandre Martínez Orts

I must confess it: Physics has always filled me with a feeling of respect. I would be lying if I did not admit that thinking about some of its mysteries has tormented me more than once.  That is how I was warned at high school by one of the few good teachers I had: «if I think about the universe when I go to bed, I cannot sleep», he said. There is, however, a concept that bothers me as much as the immensity of everything that surrounds us, everything which we are part of. Time. It is gratifying to find out that in our country, in the Institute of Corpuscular Physics of the University of Valencia, a group of scientists has led a major international research to directly discover the violation of time symmetry in the laws of physics1. In order to find out what it all means, we interviewed them. We talk, again, with science.

How about if we start by defining the concept of symmetry in Physics? I am not completely sure if it will fit within the geometric notion that I have in mind at the moment.
José Bernabeu: It is very important to clarify that. The vast majority of the public opinion visualizes symmetry in objects, but we are talking about the same thing in Physics. We refer to the symmetry of the laws prevailing in the behaviour of natural phenomena. We connect quantities that we are able to measure through physical laws. At the same time, these quantities that laws connect allow us to advance in our knowledge of nature, and they can be transformed into mathematical operations. If after converting the quantities the law remains the same we will conclude it is symmetrical.

And how important are these symmetries?
J. Bernabeu: In certain cases, a symmetrical law automatically gives us a noticeable consequence, regardless of the specific form of the law. The presence of symmetry can involve conservation laws, for example. So this concept, ever since the advent of quantum mechanics hundred years ago, has become increasingly important.
Fernando Martínez Vidal: Not only in quantum mechanics. The importance of symmetries is essential in classical mechanics as well, because it allows us to define and measure magnitudes. Symmetry not only tells us about the properties of a particular law of Physics, but it also allows us to understand and differentiate associated quantities and because of that, they can be measured.

Right before you arrived, I was reading the poster on symmetries you have in the hallway. It refers, among other things, to the asymmetry between matter and antimatter, which makes everything exist.
Pablo Villanueva: This is a really important fact known for many years. In physical laws, symmetry is as important as asymmetry.
J. Bernabeu: In fact, asymmetry may be even more important. The origin of matter is in symmetry break up. Breaking symmetry when it is clearly defined gives a lot of information, more than when there are no disturbances.

«Symmetries are within physical laws, but that does not mean that what I see in the laboratory reflects these symmetries»
Fernando Martínez Vidal

However, it has not been until now, with your research, that direct evidence of broken symmetry of time in physical laws has been found. Why?
J. Bernabeu: There is a reason that is immediately understood. Those elementary particles that helped discover, and later confirm, the asymmetry of matter/antimatter, and which are precisely where we hoped to break temporal symmetry, are unstable particles that decay over time. If a particle decays, it is impossible to use it to do the opposite movement. This seemingly clear reason is actually the basic impediment why a test of time-reversal symmetry in particles that decay had not been done.

Why was it not done with stable particles?
J. Bernabeu: Because matter/antimatter breakage has never been observed, there is always symmetry. Precisely, the breakage was observed in unstable particles. And what we wanted to know is whether we could achieve time-reversal in these unstable particles or not. At one point, we realized that there are certain systems that have two tangled, intertwined particles instead of having one. This is a very important quantum phenomenon, the foundation of all the quantum information that has been discussed in recent times.
P. Villanueva: Entangled particles share the same information. That is what suggested the solution. If one of these particles decays but the other remains alive, we make the time-reversal experiment with the other, which contains additional information and therefore allows us to know which one is the original particle. That was how, after many years of study, we came to detect the breakage of time-reversal symmetry.
F. Martínez Vidal: In many cases, identifying symmetries is not easy. As José has said, symmetries are within physical laws, but that does not mean that what I see in the laboratory reflect these symmetries. Most of the time they are completely hidden, it is almost impossible to identify them. Let’s provide a macroscopic example that shows how you can have a perfectly symmetrical physical law but what you see is completely anti-symmetric: I take this chalk and I drop it to the floor [does it] and then it breaks… [looks at the result] in three pieces. The reverse process temporarily reversed… How would it work?

Well, the three pieces should reunite and rise again unto the table.
F. Martínez Vidal: Exactly. And that is clearly irreversible. Now, what interactions are basic processes that control or determine this process? Gravitation and electromagnetism. The equations of these physical laws, formulated by Newton and Maxwell, are completely reversible. If you change t to -t, you reverse the movement, they are exactly the same. Here we have a paradox. If physical laws are symmetrical, why doesn’t our chalk fly and rebuild itself? The rational reason is that what we see, here or in the laboratory, is not only controlled by physical laws but also involves outline conditions and randomness (not arbitrariness) of physical laws.
J. Bernabeu:The fundamental laws of Physics are not the only thing involved in complex systems. A second law of thermodynamics says that, indeed, there are not only these conservation laws of symmetries we had before, but there is an amount that is not preserved. That is entropy, which tells us how organized a system is. Spontaneously, when a system is complex, evolution always automatically tends to disorder and entropy increases. The fact that it has only one meaning has nothing to do with the symmetry of the laws. We sometimes observe situations that are irreversible, but the fact that they are irreversible does not mean there is symmetry breakage on  time-reversal in the laws of physics.
F. Martínez Vidal:The paradox is here. If you look closely at the process by observing the constituents that belong to this complex system, dynamic laws can be, in fact they are, completely symmetric in time. But the overall process is not symmetrical due to the increase of entropy.
P. Villanueva: Correct me if I’m wrong, but is entropy increase nothing but time? If there was not a change in entropy, that is, a path towards disorder, we could not measure time. In fact, that is why time is always going forward; you cannot go back in time. Because the physical magnitude that time means time is nothing but entropy.
J. Bernabeu: This is the explanation of why time moves forward. Complex systems are disordered. Saying that time only moves in one direction has much to do with it. In fact, when it comes to time-reversal, we refer to reversing the direction of movement, not of time. If I make a move backwards, I am not going back in time. I am changing the direction of the movement. Time always goes in the same direction. The other direction is meaningless.