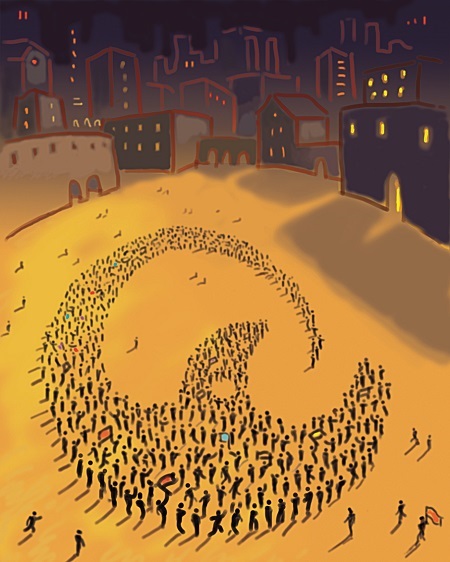 Esquisse d’un tableau historique des Progres de l’esprit humain was published in 1795, more than a year after the passing of its author. It had been written in haste, secretly and from memory, with no bibliographical source available, and by a death row convict, . Seriously ill, the convict wrote this intellectual testament while remaining in hiding in an apartment in Paris, on 24 Servandoni Street, owned by Rose-Marie Boucher, the widow of the sculptor Louis-François Vernet. By July 1793, some friends of the outlaw asked the widow to lodge him in one of the apartments she rented for her support. «Is he virtuous?» she asked. «Of course!» they replied. «What’s more, he is a Marquis», they added. She took him in free of charge until 25 March 1794, when the man decided to flee. He was arrested immediately. He died in prison a few days prior his execution.

He was a virtuous man, indeed. Very much so. He was sentenced to death on 8 July 1793 by the Committee of Public Safety, from the French National Convention, because he opposed the new constitution, proposed by the Jacobin Marie-Jean Hérault de Séchelles. On a previous occasion, he had opposed the execution of Louis XVI because he was against death penalty. The point is that the first revolutionary constitution had essentially been the work of the inmate, a committed Girondin little inclined to Robespierre’s excesses. So the revolution, like Saturn, devoured its children (its parents, in fact), including our virtuous and learned fugitive, the revolutionary Marquis. Marie Jean Antoine Nicolas de Caritat, was his name. But everyone knew him by his title: Marquis de Condorcet.

Condorcet was a very remarkable man. A nobleman, educated by the Jesuits and an anticlerical, who led the French revolutionary thought while it actually lasted, that is, while it subverted outdated ideas and the prevailing reactionary status quo. He rejected it when it became a bloody revenge or simply brotherly hatred. Something similar happened during the Russian Revolution, when second-class Robespierres gave way to third division gerontocratic leaders in due time. Condorcet, was more of a mathematician and philosopher than of a politician and political scientist. Behold both his greatness and his ruin: he knew too much.

«Real revolutions are accelerated evolutions. Fast enough so as the change is not resisted by the system, but slow enough to avoid counterproductive reactions»

Revolutions emulate the changes in state of matter: while they occur, the rules of the game are suspended and anything can happen. Evolution is the best of revolutions. That is why there are no phyletic revolutions but an uninterrupted evolution process, which sometimes speeds itself up. That’s right: real revolutions are accelerated evolutions. Fast enough so that the change is not resisted by the system, but slow enough to avoid counterproductive reactions. Condorcet, who had already published an Essai sur calcul intégral in 1765, and who had served as inspector general of finance between 1774 and 1791, knew it very well. In practical terms, ultra-revolutionaries are counterrevolutionaries. That explains why they condemn the revolutionaries.

Condorcet still had time to imagine scenarios of progress – the concept of «progress» is one of his contributions – and to anticipate mathematical paradoxes in the newborn practice of something very similar to universal suffrage. He enunciated the later called Condorcet paradox, the forerunner of the more controversial and newer Arrow hypothesis. It explains that polls with more than three candidates do not quite reliably reflect the voters actual preferences. Sociologists and politicians distrust these mathematical evidence, basically because they are uncomfortable truths. Because being an enlightened man, a scientist and a revolutionary is a pain.