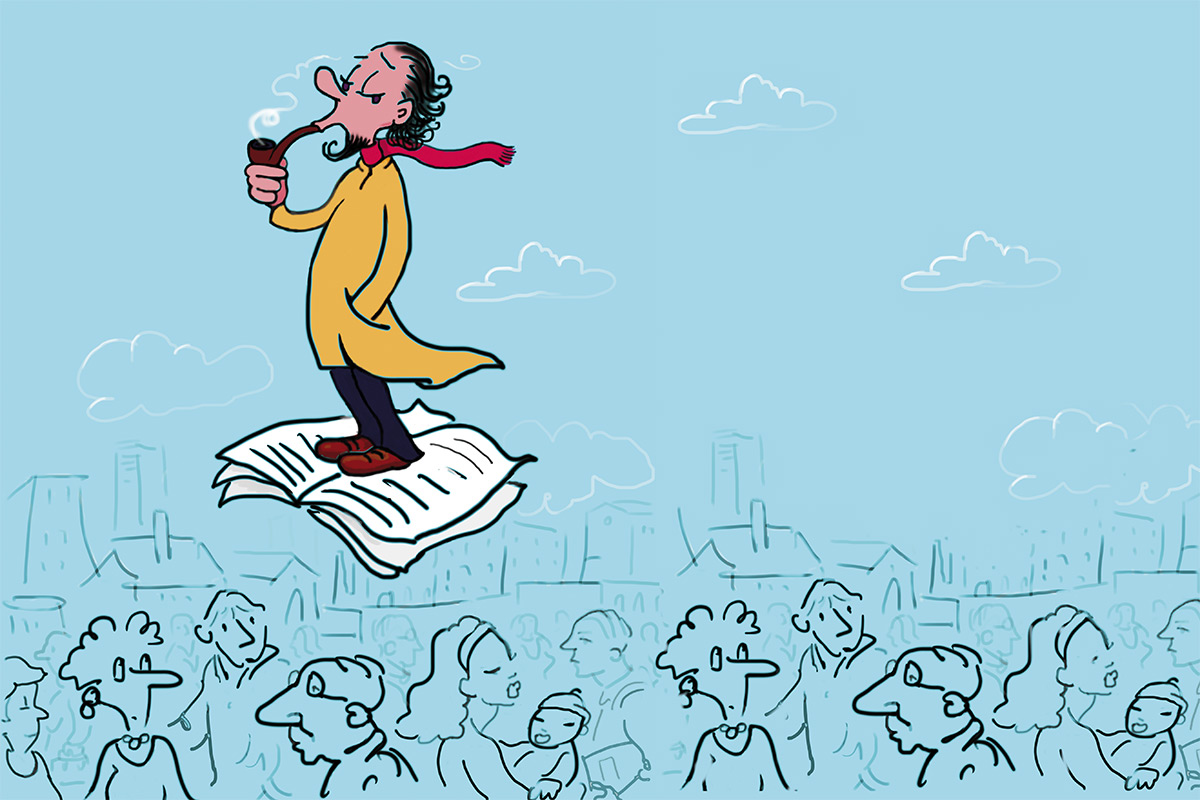 In Sarlat, the Perigord city with a splendid medieval centre, there is a sheltered market inside a desacrilised church. The reform was supervised by the architect Jean Nouvel, born in Fumèl, a nearby town. A quote from Jean Baudrillard can be read over the immense nave door: «Architecture is a mixture of nostalgia and extreme anticipation». The quote is unnecessary. Architecture is the art and skill of conceiving and building beautiful, liveable-in places. Between the two statements the abyss of thought in conflict with speculation appears. Or, perhaps, science confronted with philosophy in decline.

In 1990 Baudrillard announced that the Gulf war would not take place and later justified this statement saying that there had been no such war, merely exaggerated warfare scenes on television. It takes a lot of cheek. He was a Sartrean intellectual, one of those divine beings maintained with public money, who lectured to Mankind from his supposed independence. This is a typically French product, able to disdainfully fly over reality, happy to have met. They have nothing to do with maîtres à penser (leaders of thought) of the eighteenth or nineteenth centuries, lucid and generous people who illuminated the industrial civilisation.

Ramonet wanted to be a sculptor, but the marble had to be paid for by Mr. Esteve, his execrated grandfather. Santiago Rusiñol’s pervasive irony put us on the alert: times of subsidised impostors were approaching. A tragedy because its emphatic emptiness has discredited the real intellectual task and at the same time, has given wings to an Esteve-typical vulgarity, prone to making fast money. Without intellectual vigour, reflection is no more than a parody and action becomes a spastic movement.

In 1772, José Cadalso published Los eruditos a la violeta (The Pseudo-Intellectuals), a satire «of those who claim to know a great deal while studying very little», as announced by the subtitle of the work. Two centuries later pseudo-intellectuals have proliferated, not so much because of the lack of study, but because they digress in excess; or because they study episodic epistemologically irrelevant issues. This mannerist fickleness oriented to épater les bourgeois (impress the bourgeois) who pay for the marble or to dazzle the snobs, may not –in my opinion– be considered thought.

«A Sartrean intellectual is a typically French product, able to disdainfully fly over reality»

José Cadalso’s father wanted his son to be a civil servant (known as covachuelistas by the Madrid locals of the time, covacha being a Spanish term referring to the palace basements where the royal administration staff worked, hence covachuelistas being those working in these public offices). He was admitted to the Seminary of Nobles because the boy had «all the wildness of a Frenchman and all the roughness of an Englishman». In fact he was an independent spirit, a cosmopolitan culture-lover, one of the few enlightened Spaniards of the time. He ended up enrolling in the army. Today he would not have had needed to do this, as he would surely have been granted a professorship. And I should imagine he would have been offended by the frivolity of the pompous Sartreans.

There must be other options, besides Mr. Esteve and Mr. Jean-Paul. There are, in the same way that there are solid architects and media stars. They exist and have great impact on us. Industrial civilisation has lost all arguments, surpassed by its own success and bereft of anchors now that its foundational axioms are outdated (if not false at the outset). Against its initial assumptions, energy is neither abundant nor cheap, natural resources are finite. Another paradigm is needed, a new Utopian horizon. Economy must be reinvented and rid itself of the idea of continued growth as a natural force. We must see if there are subjects of thought; with rigour, independence and responsibility; weak thought and poor definitions of architecture are not what we need.