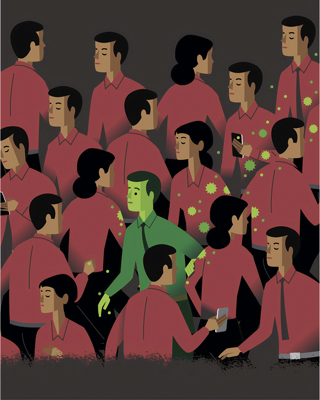 Being a man is a risk factor for COVID-19, the disease caused by the infamous SARS-CoV-2 virus. Although we will not have reliable statistics until the pandemic is over, the European Centre for Disease Prevention and Control estimates that the rate of critically ill patients is 2.7 times higher in men. The entry of SARS-CoV-2 into human cells critically depends on two enzymes: ACE2, which act as the receptor for the virus, and TMPRSS2, which modulates the virus’s affinity for ACE2. Although preliminary, available data suggest that differences in virus lethality may be linked in part to the differential expression of the gene encoding ACE2 in women and men,1 as well as to possible effects of testosterone on the transcription of the TMPRSS2 protein. Apart from COVID-19, the fact is that the existence of sexual differences in susceptibility to infectious diseases is not at all an anomaly. A man with acute HIV infection has a higher viral load than a woman (about 40% higher) and the lethality of many infectious diseases is higher in men than in women: 1.5 times higher for tuberculosis, up to 5 times higher for human papillomavirus (HPV) or twice as high for Epstein-Barr virus.

Medicine is making great strides in understanding the physiological mechanisms behind these differences, due in large part to the effect of sexual chromosomes and hormones on the development of the immune system. The immune system consists of two fundamental mechanisms of defense against a pathogen: innate and adaptive response. The innate immune response involves mechanisms of immediate action against a pathogen, such as phagocytic macrophages, which literally engulf the pathogen, or tissue inflammation, which helps fight the infection. The adaptive response is much more complex and is based on the development of specific antibodies against each particular pathogen. Typically, women are characterised by innate and adaptive immune responses that are generally stronger than those of men, which means that they tend to get rid of pathogens more quickly and effectively, and respond better to vaccines. For example, women have more than twice as many antibodies after getting a flu shot. Understanding these differences is essential to effectively combat infectious diseases, but it tells us very little about why they occur in the first place. This is where evolutionary biology has a lot to offer.

The sexual differences outlined above can be seen throughout the tree of life. The immune system of males and females has evolved similarly differently in many species, from sea urchins to chickens, insects, reptiles, and mammals. To understand the reason for this differential evolution, it is necessary to understand two inescapable compromises in the evolution of the immune system. First, an immune system is very costly to produce and therefore develops at the expense of other biological functions, such as reproduction. How much energy can be devoted to the development of the immune system will therefore depend on its importance for the biological efficiency of an organism. A strong immune system will be crucial in species that have to deal with many pathogens throughout their lives. This, in turn, will depend on ecology, which will condition the load of pathogens in the environment, as well as the longevity and social complexity of a species, which will determine how easily a pathogen will be transmitted when an infection occurs. Bats, for example, are natural reservoirs of virus for reasons related to their high longevity and sociability. On the one hand, they can live up to forty years in nature (relative to their body size, eighteen of the only nineteen mammal species that live longer than humans are bats). On the other hand, they form complex colonies of up to twenty million individuals like the one found at the Bracken Cave Preserve (Texas, USA), paradise for a virus. In addition, an immune system faces the permanent challenge of having to fight harmful cells while tolerating beneficial ones. If the immune system is very reactive and aggressive towards external pathogens, it can end up attacking its own cells (autoimmune diseases) or beneficial mutualistic bacteria.

«Consistently throughout the tree of life, evolution seems to have given greater importance to the female immune system»

When faced with such a challenge, and consistently throughout the tree of life, evolution seems to have given greater importance to the female immune system. To begin with, because the sex that makes the greatest investment in caring for the offspring (typically the females) will be favoured by a more robust immune system than the sex that makes the greatest investment in reproducing rapidly and extensively (typically the males). While it is often essential for females to remain healthy in order to care for offspring, evolution tends to favor “fast living” strategies in males. Similarly, gestation also favours more robust, effective, and subtle immune systems when it comes to detecting pathogens, with less dangerous inflammatory responses during gestation. The latter is particularly important in mammals, where the female immune system must tolerate fetal cells while protecting the fetus from external pathogens. In short, evolution seems to have chiseled the immune system of males and females as a result of slightly different life histories.

Evolutionary biology is also essential to understand how pathogens evolve alongside us, their hosts. Some viruses could have evolved to be less virulent against the female sex. Although both males and females are vectors of the same viruses, for many pathogens vertical transmission occurs mostly during pregnancy, delivery, and lactation. A less virulent virus in women, with less ability to kill a female host, will greatly expand its chances of vertical transmission. In the human species, for example, the HTLV-1 virus can produce lethal leukemia in adults and is especially prevalent in southern Japan and the Caribbean. In Japan, where the breastfeeding period is longer than in the Caribbean and therefore vertical transmission is especially biased towards women, the virus is more virulent in men (2 to 3.5 times more). This is not the case in the Caribbean.

Embracing an evolutionary perspective thus helps to explain why men and women react differently to certain infectious diseases and to understand (and combat) the strategies of viruses in their relentless evolutionary race to infect and spread among us. This is undoubtedly one of the reasons why basic science is so important. Who else could have predicted that understanding viruses, longevity, and the intricate social behaviours of an obscure and elusive winged mammal could become so relevant to our health?

1. Differences in expression in the same gene could also explain, at least partially, the effect of age, as well as the specificity of the virus for certain tissues, but we will not address these issues here. (Go back)