Pumpkins are the most impressive of vegetables, due to their great variety and spectacularity. They come in all kinds of shapes and sizes. Besides, we can find almost every colour on the skin of pumpkins: red, green, yellow, black, white, orange, grey or even blue, or any mix of several ones. There are many kinds of pumpkins, some in summer and some in winter. The most well known are the pumpkins we use for cooking, but some, like «bottle gourds», can also be used as drink or food containers, and others, such as the «estropajo» pumpkin (“estropajo” meaning scrubber), are used as decoration.

«Together with sweet and white potatoes, they avoided hunger after the war, but they are way older and so frequent that it has been fixed in Valencian popular language»

Summer plants want warmth and light. Pumpkin plants are vigorous and strong, they can crawl and climb. They try to cover a large ground space. That is, if we try to grow baking pumpkins, we have to devote a large corner of our garden to them. The plant is furry and the sprouts drill into the soil while tendrils try to hold onto whatever they can. Male and female flowers are separated in the plant. They are big, sometimes as big as a span, and intensely yellow.

Traditionally, the sowing hole is prepared digging deep, fertilising with manure and covering with a thin layer of dirt after sowing six or seven seeds per hole. Then we water sufficiently and, when the sprouts start to appear, we leave only a couple of them. In the area of La Ribera, we sow in late March and, if all goes well, we harvest in late August or early September, approximately.

This crop does not need too much water. If we watered abundantly when we sowed, we will not do it again until we see the first flowers. Watering will depend on the soil: for more sandy soils, we need more water than for soils that retain water well. The water needs increase as the fruit appears. Some farmers do not rush and wait until the leaves start to wither before watering again. But they all agree that we do not have to water at the end of the cycle, since that endangers the conservation of the pumpkins. Rainfed lands have always yielded high-quality crops.

Regarding the location, they are rustic plants and can grow on any ground, although they prefer fertile, worked land. Pumpkins do not suffer from big health problems. We can find some aphids in spring, and the summer can bring a fungal disease, the powdery mildew (Sphaerotheca fuliginea), which affects Cucurbitaceae and lives on the leaves. The entire family can suffer from it. When it is warm, the mycelium can be seen colonising the leaves of pumpkins, melons, cucumbers, etc. Fortunately, it can be controlled spraying the plants with sulphur (the best moment for this is at dusk). 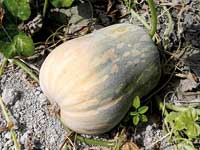 Many pumpkins endure for a long time, so we can eat them during the winter and even until spring. They have always been stored in balconies, where they tolerate bad weather. They can be stored in a dry storage room, because humidity will rot any fruit with a cut. If that is not possible, it is better to leave them outside. They are preserved better if we keep the stem or even a piece of the limb. We will keep the seeds of the sweetest pumpkins for the next sowing. When dry, they can be preserved for four or five years.

The fruit can be eaten boiled or roasted. Seed, as well as the flowers of some varieties, are also edible. Pumpkins are very appreciated in Valencian cuisine: oven-roasted, in cakes, candied, in preserves, jam, with rice, in stews… They are a necessary ingredient to make «bunyols de Sant Josep», in «arrop i talladetes» and the fantastic «arnadí». They are food for people as well as domestic animals, who also enjoy them. Many farmers explain how good they were for horses during the work in the summer, as a refreshment when it was hot. 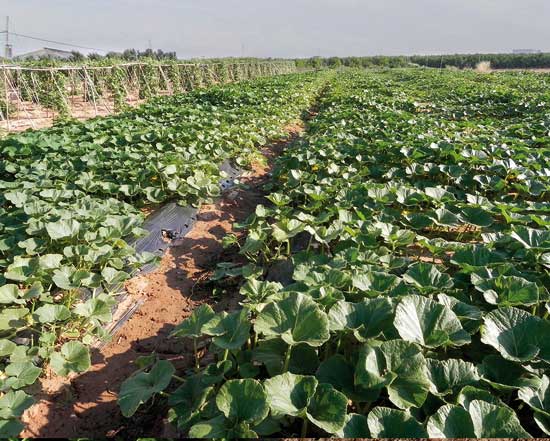 Together with sweet and white potatoes, they avoided hunger after the war, but they are way older and so frequent that it has been fixed in Valencian popular language. Figuratively, «se donen carabasses» (one receives pumpkins) when an exam is failed or a situation is cancelled. Those who lose consciousness «Es tornen carabasses» (become pumpkins), or fruits with an unexpected bad taste «ixen carabasses» (turn out pumpkin). But their trail in Valencian proverbs and sayings is much more clear. A brief summary to clarify: «Arròs, carabassa i peix, mor en vi i en aigua neix» (“Rice, pumpking and fish die in wine and are born in water”), «La carabassa, ni engreixa ni embarassa» (“Pumpking does not make you fat nor pregnant”), «Qui pensa saber massa té el cap de carabassa» (“Know-it-alls have pumpking heads”), «A l’home vell, carabassa amb ell» (“Pumpkins for the old man”) o «Festeig que dura massa sol acabar en carabassa» (“Too long a courtship ends up in pumpkin”). Also, finally, the advice a girl was given: «Maria, si et vols casar, no et cases a la Ribera, que et faran menjar bajoques i flors de carabassera» (“Maria, if you want to marry, do not marry in La Ribera, or they will make you eat beans and pumpking flowers”).