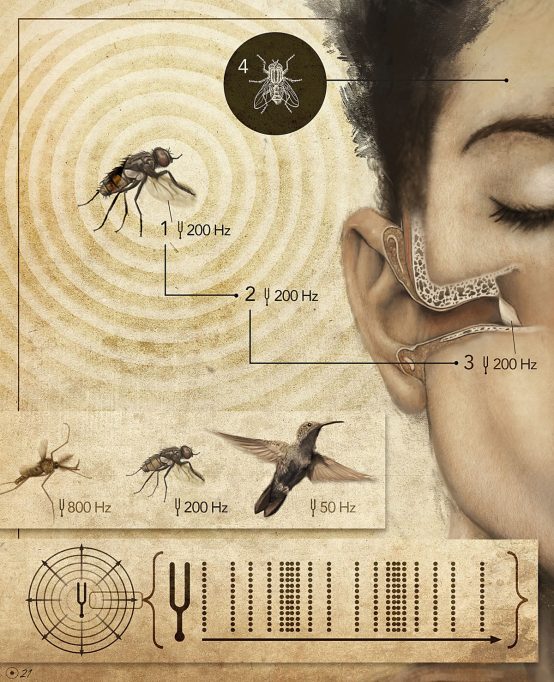 A rainy afternoon, lightning in the distance; my father slowly counts «one, two, three…» and then we hear a deafening thunderclap. «That one was one kilometre away», he says. I cannot say which I found more fascinating, the noise reached my childish senses or that oracle-like guessing. The famous Leonard Euler explained it to a fifteen-year-old Friederike Charlotte of Brandenburg-Schwedtin in his Letters to a German Princess. «You must no doubt have frequently remarked, that the noise of thunder reaches not the ear, for some time after the lightning: and it is by this we are enabled to calculate the distance from the place where the thunder is generated (…) and were a cannon to be fired at Magdeburg, if the report could be heard at Berlin, it would arrive there in seven minutes». This phenomenon helps us to understand the nature of sound, as a propagation from the source of the sound to the ear of the receiver. But what exactly is transmitted, and how?

In a football stadium where the public performs a Mexican wave, we see that people raise their arms and, as they lower them, the people next to them raise their arms as well, and so on. This is a wave: the transmission of a disturbance (raising and lowering of the arms) without any displacement of matter (the people do not move from their place).

«If our hearing were sensitive to sounds lower than 20 Hz, we would hear the leaves and branches on the trees swaying in the breeze»

When I pluck a guitar string, when I rap on the table, when a fly flaps its wings, something vibrates. In all cases, there is something vibrating that is the source of the sound. The vibrations from the source are transmitted in all directions to the nearest surrounding air, which compresses and decompresses, transmitting the vibration to the adjacent air, and so on. Suppose we line up about ten people, side by side, shoulder to shoulder. Someone (the vibrating object) gives a push to the first one, who will transmit the push to the next one, and so on until the last one (our ear) receives it. In fact, vibrations propagated by air or other media (fluids or solids, remember the telephone game, with glasses connected by a taut thread), are transmitted to our eardrum. From there, they pass to the sophisticated human auditory system, capable of distinguishing pressure differences as small as 200 billionths of an atmosphere (compared to the average value of 1 atmosphere) equivalent to the impact of a small pin on the ground. When the sound wave hits a barrier such as a wall, it is partly reflected. If the distance is large, we can tell the original sound apart from the reflected sound (its echo); if the distance is small, we receive an annoying reverberation.

In short, for there to be sound, there must be a vibrating source, a transmitting medium that propagates the vibration at a certain speed (we cannot hear explosions in interstellar space like in some science fiction) and a receiver that is set into vibration when the wave arrives. If fly wings oscillate 200 times in one second (200 Hz), the sound wave and our eardrum will oscillate at this frequency. This is different from that of a hummingbird (50 Hz, a lower frequency) or a mosquito (800 Hz, a higher frequency). If our hearing were sensitive to sounds with a frequency lower than 20 Hz, we would hear the leaves and branches on the trees swaying in the breeze, our hand waving goodbye, or the oscillation of the conductor’s baton superimposed as a humming sound on the orchestra’s music.

Few similes are as didactic and poetic as the one attributed by Diogenes Laertius (III A.D.) to Zeno of Citius (III B.C.), which has been further elaborated from Vitruvius to Einstein: “That hearing is done by wounding the air between speaking and hearing, which is done circularly and with undulations. ) and which has been elaborated from Vitruvius to Einstein himself: «(…) we hear because the air between the speaker and the hearer is struck in a spherical manner; and is then agitated in waves, resembling the circular eddies which one sees in a cistern when a stone is dropped into it.»

A) Cover a bowl with a stretched plastic kitchen sheet (the eardrum) and sprinkle salt on top. Beat a drum or bring a loudspeaker with music at a certain distance from the bowl, without making direct contact: the salt will bounce as evidence that the vibrations are transmitted through the air.

B) Hold the end of a large plastic toy spring and stretch it by hand on a table, without over-tensioning it. Make a rapid back and forth movement with your hand in the direction of the spring (longitudinal wave). You will cause a compression of the coils which is transmitted along the spring (a pulse) similar to the air propagating the sound. This pulse is reflected at the ends (producing an echo). Measure the length L of the spring and the time T of several (N) round trips, and deduce the velocity of the waves in the spring (v = NL / T).