7 And when he had opened the fourth seal, I heard the voice of the fourth beast say, Come and see.
8 And I looked, and behold a pale horse: and his name that sat on him was Death, and Hell followed with him. And power was given unto them over the fourth part of the earth, to kill with sword, and with hunger, and with death, and with the beasts of the earth.1 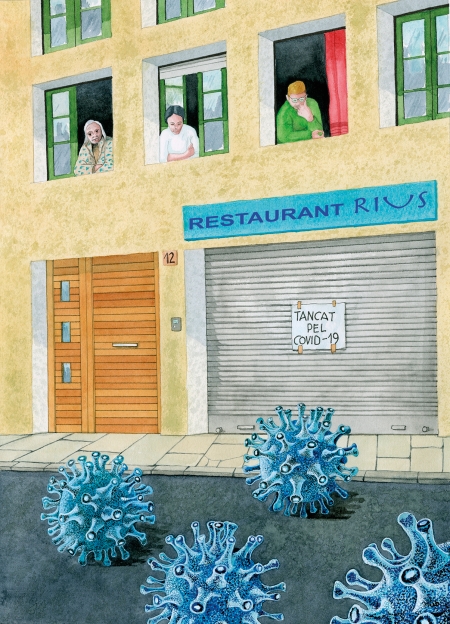 The threat posed by infectious diseases has increased with the continued emergence of new and old diseases with a global impact. In total, there are about 1,400 known human pathogenic microorganisms (including prions, viruses, bacteria, fungi, protists, helminths, and arthropods), 60 % of which also infect other animals. 75 % of new emerging human infectious diseases in the last thirty years have an animal origin (zoonosis), and 17 % are transmitted by a vector, such as a mosquito, flea, or tick.

Before causing an epidemic, an infectious agent has to go through several stages of adaptation, including acquiring the pathogenic capacity to cause an ailment in the new host and having the capacity of spreading person-to-person in order to remain in the population. The «transmission ratio» of a disease, R0, is defined as the number of secondary cases resulting from a single infected individual in a population of susceptible individuals. If R0 > 1, transmission leads to an epidemic. Each epidemic tends to decrease over time as the pool of susceptible individuals goes down. But beware, an epidemic relapse can occur if new susceptible individuals are added to the population – for example, by new births or immigration. If R0 < 1, each infected individual produces less than one infection and the pathogen can not stabilise in the population.

There are numerous examples that show how serious the impact of infectious diseases has been on humans. In the late Middle Ages the Black Death (caused by the bacterium Yersinia pestis) killed 30–60 % of the European population. The peak of the epidemic occurred between 1348 and 1351. In the eighteenth century it is estimated that smallpox, caused by the variola virus, killed 400,000 Europeans every year. It was eliminated in the late 1970s; the last recorded case happened in Somalia in 1977. In 1980, the WHO considered it eradicated. It is the only disease extinguished by human action.

Like smallpox, measles, another virus, has been a scourge for centuries, affecting millions of people on different continents. Even now, when a safe and effective vaccine is available, measles remains one of the leading causes of death among children under five. In 2018, more than 140,000 people died from measles worldwide, with many deaths due to the refusal of parents to vaccinate their children.

The flu, also a virus, is another important infectious disease that we humans still endure. No other infectious disease has caused as many deaths in such a short time as the Spanish flu epidemic of 1918, which killed up to 40 million people worldwide in a single year. In 1957, the Asian flu killed 1-2 million people. Influenza viruses cause epidemics in humans and have significant annual morbidity and mortality worldwide. It is estimated that 10–20 % of the population suffers from the flu each year. Annual epidemics cause 3–5 million cases and about 290,000–650,000 deaths worldwide. In Spain the flu epidemic of 2018–19 led to 490,000 cases in primary care, 35,300 hospitalisations, and 6,300 deaths.

Coronaviruses were first identified in 1966 by British researchers D. A. J. Tyrrell and M. L. Bynoe. Each year different coronaviruses periodically infect the human population, causing a mild, self-limiting respiratory condition not requiring medical attention, generally known as the «common cold». The name corona describes the shape of the halo generated by the glycoprotein in the virion’s envelope, or viral particle, which can be observed under an electron microscope. Each virion is approximately 120 nm in size. Coronaviruses belong to the family Coronaviridae, within the order Nidovirales. They have a positive-sense, single-stranded RNA genome, and represent the largest known RNA viral genome. The technical name of the new coronavirus causing the COVID-19 disease is SARS-CoV-2, because it is a derivative of the virus that caused the 2003 SARS disease, called SARS-CoV.

«So far, more than 200 complete SARS-CoV-2 genomes have been sequenced which contain 111 non-synonymous amino acid mutations»

Like all RNA viruses, coronaviruses have a high capacity for mutation. So far, more than 200 complete SARS-CoV-2 genomes have been sequenced which contain 111 non-synonymous amino acid mutations (the genetic code is redundant and different nucleotide codons can encode the same amino acid, which would account for synonymous mutations). In COVID-19, none of these mutations have proven to be clinically important. The most relevant aspect of the virus genome is that the S membrane protein, which gives coronaviruses their characteristic crown, is similar to that of SARS-CoV (75 %), suggesting that it attaches to the host cell membrane through a very similar mechanism: the action of the angiotensin-converting enzyme 2 (ACE2). This could be a potential target for the development of an effective vaccine.

Person-to-person transmission of COVID-19 occurs by inhaling small droplets of the virus spread by sneezing, coughing, spitting, or talking, and through personal contact, like shaking hands. The viral particles contained in these droplets can infect others through their eyes, nose, or mouth. These droplets can travel a distance of about 5 feet. Transmission can also occur by touching contaminated surfaces. It appears that SARS-CoV-2 can remain infectious for several hours as an aerosol and for up to three days on plastic and stainless steel surfaces. Solutions of ethanol (70 %), hydrogen peroxide (0.4 %), or bleach (0.1 %) are effective in disinfecting this virus on surfaces within one minute exposure times.

«Many countries have declared a state of emergency, restricting the movement of citizens. How far will the infection spread?»

At the time of writing this article there is no specific treatment to eliminate the COVID-19 virus. There are, however, treatments to alleviate symptoms. Thus, the only control measure we currently have to reduce its spread is confinement, while we hope to find some specific antiviral drug or prepare an effective vaccine soon. Many countries have declared a state of emergency, restricting the movement of citizens. How far will the infection spread? The world’s economies are in danger of recession. Thus, coronavirus is not only a health problem, but also a social one. Whatever we do and achieve now must be a lesson for future health attacks and threats. Contemporary history will be marked by two periods in this century: «before and after the coronavirus».

The year 2020, expected to be a symbolic year for the EU, will be remembered in the future not as a year of triumphs but as the year of COVID-19, when a new disease upset the world. We hope that individual actions will be effective, and that 2020 will also be remembered as the year when one of the four horsemen stopped riding.

1. Note. The two verses from Revelation are from the King James version of the Bible (available at https://www.kingjamesbibleonline.org/). (Go back)