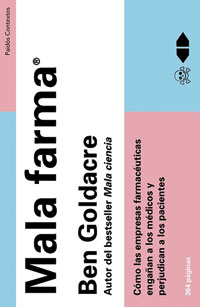 Finally, a book explaining the shortcomings of the pharmaceutical industry and its surroundings. During the last two decades the pharmaceutical industry turned into one of the movies’ bad guys and reports on their bad practices are easy to find in different places, including our local clergy. What makes Bad Pharma different is that Ben Goldacre knows what he is talking about, clearly identifies the problem, allocates the blame among those involved and rejects conspiracy theories. Pharmaceutical companies are not hiding the cheap alternative to cure cancer from us: reality is much worse.

His previous book, Bad Science, was a controlled demolition of several scientific myths, the abuse of statistics in the analysis of clinical trials included. Now he focuses on the process of development of drugs in a systematic way, with no room for doubt. Examples cover all kinds of illnesses, drugs and companies. He cannot be accused of selective choice, because he shows very representative cases. He could maybe be blamed for not mentioning the development of treatments for «non-commercial» illnesses, such as Mectizan, which Merck gives away since 1987, but it is fair to say that these gestures of good will come to nothing when compared to the long list of malpractices reviewed by Goldacre.

The result is an unsettling book. The pharmaceutical industry is the centrepiece of this problem, but Goldacre identifies the role played by doctors, professional associations, universities, regulators, scientific journals and patient associations, among others. In the end no one’s hands are clean. As an individual related to the pharmaceutical sector, I recognise in Bad Pharma some of the usual practices around me. It is not that us people are inherently bad, but incentives are usually set in a way that does not provoke the best behaviour.

The example of the access to data from trials is repeated throughout the book. Two heads are better than one, and it is indisputable that a double check can detect things (for better and worse) that the researchers might have not noticed. Neither industry nor regulators provide the data, even though judge rulings require them to, and when they do it is too badly, too late. Furthermore, a lot of clinical trials make irrelevant comparisons (with placebo, or not very effective drugs, instead of comparing them to the best treatments available). It is clear that the industry spends more money on marketing than it does on research, and that has a negative effect on the patients –starting on the price of medication.

The good news is that, after diagnosing and explaining the causes, Goldacre proposes solutions. Some are as simple as honouring what is written: journals should only publish properly registered trials; doctors should declare any conflict of interest; companies should carry out trials according to previously defined criteria and provide original, uncensored and anonymous data to those who want to review them. Other propositions are more complicated: limiting the effect of medical sales representatives and other elements of influence on the behaviour of doctors. But public health systems understood that cost-cutting also includes pharmaceutical industry marketing budgets.

Bad Pharma is a highly recommendable book. Those of us with a role in the pharmaceutical field will feel motivated to review some of our practices. The rest of readers will reach a better understanding about why some things are the way they are, and they will learn what to do to change them.