The Survival of Silk Landscapes

The landscape of Alzira, Carcaixent, La Pobla Larga and other neighboring towns of La Ribera is almost exclusively planted with orange groves now. But in many of them we can still find remaining mulberry trees from the crops that were before, whose leaves served as food for the silkworms we kept in breeding shelves. Although mulberries were planted in groves, the need to extend farmland made farmers start growing them in orchards from the eighteenth century. Both the orange and the mulberry orchards follow the pattern of Valencian gardens and appeared during the Enlightenment and the start of physiocratic thought. But at first, in the process of expansion of irrigation, mulberries occupied much of the surface taken from rainfed land. In the second half of the nineteenth century the orange began to expand over the new transformed land; replaced the mulberry in the orchards and generated the landscape that we have today. 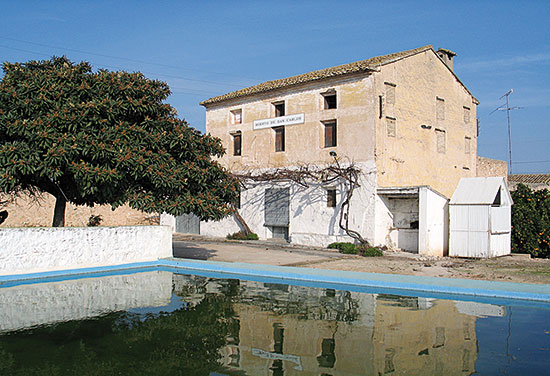 Adrià Besó
Both the orange and the mulberry orchards follow the pattern of Valencian gardens and appeared during the Enlightenment and the start of physiocratic thought. In the photo, Hort de Sant Carles (Alzira).

From the Middle Ages until the second half of the nineteenth century, mulberries had been common in the landscape of Valencian gardens that specialised in silkworm breeding, locations like La Safor, La Ribera Alta and L’Horta de Valencia. This picture was reflected in many graphic and literary testimonies. Vicente Lassala, royal commissioner of agriculture, upon inspecting the south of Valencia in 1871, visited the crops around Alzira, «with fields enclosed by stout mulberry trees», and Gandia, «whose gardens are populated by mulberries». They were planted along farm plots and accompanying roadsides and ditches, «contributing greatly to beautify provided by these extensive gardens coloured by so many crops», the agronomist Sanz de Bremón said in 1875.

«From the Middle Ages until the second half of the nineteenth century, mulberries had been common in the landscape of Valencian gardens»

In Ribera del Júcar mulberry cultivation grew considerably from the modern era, especially in Carcaixent and its surroundings, making it necessary to expand irrigated land. The first major expansion started in 1679 with the opening of the Royal Irrigation Canal of Carcaixent, thanks to which an extensive rainfed area north of the town was irrigated, and the plots, surrounded by mulberry trees, were devoted to horticultural crops. But the need to extend the crops – already exhausted the possibilities of surface irrigation – encouraged in the eighteenth century a new stage of dryland transformation using underground water sources. This process began in those lands bordering surface irrigation plots, located in the headings of La Vilella and Les Basses del Rei, near the road connecting Carcaixent and Alzira. They are sandy plots, unsuitable for low cultures, so they were used for tree crops, among which the mulberry tree would stand out in the first stages. The result was the emergence of a different orchard landscape, characterized by the presence of “huertos”, a term referring to a portion of ground, usually enclosed with walls and dedicated to trees, while “huertas” (market gardens) are dedicated to low crops in open fields.