Oasis of optimism amid degradation

It may be that the term lake, and especially pond, will not remind most people of anything valuable, but these bodies of water have been considered wetlands for a long time by the Ramsar Convention – an intergovernmental treaty to frame conservation of wetlands – and their value for biology conservation has been known even longer. In general, we know wetlands feature high productions, rich communities and unique species that are sometimes able to combine stages in different environments, but… are small lakes with less water also valuable? And what about the man-made ones? 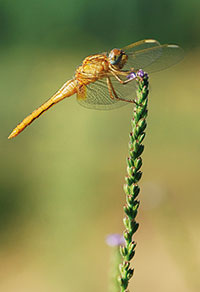 Dragonflies are also abundant in the new lakes and their surrounding, especially in areas with aquatic plants, which they use for mating and as shelter. Above, a young specimen of one of the most common odonata species (Sympetrum fonscolombi).
© A. Ruhí

In fresh-water aquatic environments there is usually a great productivity, intense selection forces and features of both the aquatic and the land environments. Together, these factors create a considerable biological richness. To understand the reasons for this richness, we have to take into account that the features of a body of water depend on the conditions of its location, and that they can remain protected against pollution spots – even keeping a good condition next to degraded human environments.

In any case, it is their size that makes them more vulnerable against human action. These small environments have suffered the decline of European wetlands during the last century especially. And this deterioration – and often disappearance – of small bodies of water has not been harmless, obviously: the series of wetlands maintain populations of organisms that survive thanks to temporary migrations of local populations. Therefore, if the density of the wetland is not enough, the biota tends to decrease, and this biodiversity erosion has been observed – in different groups such as odonata (dragonflies) or amphibians – together with the disappearance and degradation of small lakes. Despite the tries of legislators to recognise and protect these habitats, we have not been able to revert the sad trend – as in many other environments.

New lakes play a role here, because they represent, at least on paper, an alternative tool for preservation. Apart from natural processes, a great range of human activities have been (and still are) responsible for the creation of lake ecosystems: ponds offer important value for society, like storage of water for the livestock, stopping rainwater, recreational use or the processes of purification of water from treatment systems. More recently, the possibility that they play a role in the preservation of unique or endangered species boosted the creation of artificial lakes to make up for the loss of aquatic environments. The question, though, is almost automatic: do we know enough about the ecological operation of these ecosystems to use them as a biological preservation tool? 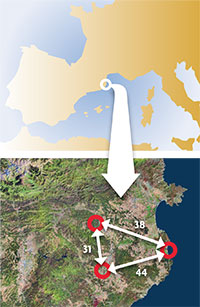 Map of the studied area, in Gerona. They are in the same region but affected by different local factors. Hydrological stability proved to be the limiting factor for these lakes.
© Mètode

Approach to their populations

There are few studies assessing the success (or failure) of recent man-made lakes in favouring biodiversity, but they coincide that colonisation of new aquatic environments is, in general, rather fast. Whether it is a reservoir, an irrigation channel or a restored river, a spring or an artificial lake, pioneer invertebrates quickly colonise it after their first flooding. Regarding aquatic macroinvertebrates – those we can see with the naked eye –, insects with the ability to actively spread usually colonise it first. Research carried out in three different areas of Gerona, where similar lakes were created at the same moment, shows as much: On the one hand, colonisation was really fast. In only a few weeks of flooding, more than half the species had already arrived; on the other hand, most of them were insects. Larvae of the ephemeroptera Cloeon inscriptum, of the aquatic bedbug Anisops sardeus and the diptera Chaoborus flavicans have been the most representative taxons in El Pla de l’Estany, El Bajo Ter and La Plana de la Selva, respectively. If we analyse the community from a functional point of view – how and what do these species do – instead of a taxonomical one – what species are there – we can see there is a preponderance of invertebrates with the ability to spread – flying, for instance – on their own. It is proof of the youth of these lakes and a warning for anyone thinking that a new aquatic environment will host unique species immediately. On the contrary, opportunistic organisms will take precedence at first and take the habitat as a new feeding and mating ground.

«New lakes play a role here, because they represent, at least on paper, an alternative tool for preservation»

This is evident in the research, because most parameters in the community – descriptors about its organisation: diversity of species, taxonomy, phylogenies or the abundance of individuals – did not change a lot during the first year. In a community undergoing a process of ecological succession – from an initial desert stage through the intermediate stages with more diversity of species to a climax stage where the best adapted to a stable environment would succeed – changes would be expected in these descriptors. Therefore, the population would be structured and advance – not always gradually nor at the same speed – following a series of described and organised stages: the succession. Instead, they observed changes only in one parameter – biomass – during the first year. It grew during that first year, but the rest did not change significantly, or changed in place but not time – relating to aspects such as changes in the water level or draining of the lake, which were different in each lake.

The same happened when we observed their composition: both from the taxonomical point of view and the functional, it was connected to location – the group of species was different in each location, as was their feeding and response towards the environment. However, it did not change a lot over time. Thus, we could not claim that the population was structured after the first year and, consequently, we could not talk about succession. There was only the first step – colonisation by opportunistic species surveying for new scattered habitats – but we will need to keep waiting to see a similar community to the ones we would find in a natural lake. Other research projects compared, for instance, the richness of aquatic beetles in lakes of different age. They found that only the «oldest» lakes hosted more specialised coleopterans that depended of specific plant species only present in the last stages of succession… despite the fact that diversity of beetle species in «young» and «old» lakes was similar – sometimes even bigger in the newer ones.

Other examples prove that time plays in our favour; so many conservation projects that do not look for immediacy include new ponds as an essential element for biodiversity preservation. In addition, the level of success depends on the point of view of the animal – or plant – we intend to favour: some of these lakes were an important mating ground for the natterjack toad (Bufo calamita) or Perez’s frog (Pelophylax perezi), the urban ponds in Gerona are recruitment points for the common midwife toad (Alytes obstetricans) and garden ponds in nearby residential areas have been the breeding grounds of the common parsley frog (Pelodytes punctatus). All of them are important from the point of view of herpetology. 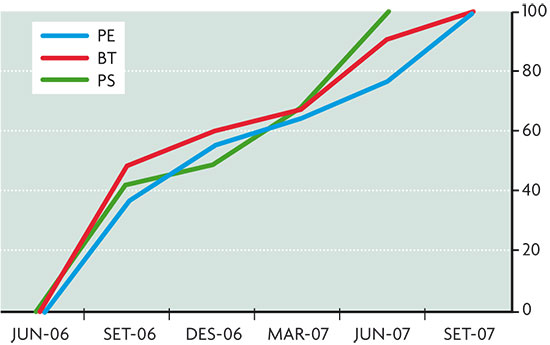 Accumulated richness of species (in percentage) during the first year, in each location: Pla de l’Estany (PE), Plana del Baix Ter (BT) and Plana de la Selva (PS). It is worth noting that in the first sampling, in Sempember 2006 – just a few weeks after the first inundation – the habitat had already reached 50% of the total of species that would colonise the new artificial lakes. The spans of time on the lower axis cover from June 2006 to September 2007.

The fact remains that in thoroughly intervened Mediterranean environments, water – or the lack thereof – is usually the limiting factor for a lot of species. Ponds that double as watering trough for birds are successful during the summer near the cities; and the gardens of these shallow layers of water will be a fine refuge progressively withdrawn from suburban areas; they will also be accepted in the natural environment, less and less wild every day. Both from an aesthetic point of view and an educational or scientific, and even, in some medium term cases, from the point of view of preservation, it is worth recovering these small habitats that apathy and the obsession for great, exotic and faraway things made us abandon. Big or small, deep or shallow, permanent or temporary… If we believe human impact is always negative, why do we not try to reverse the trend? 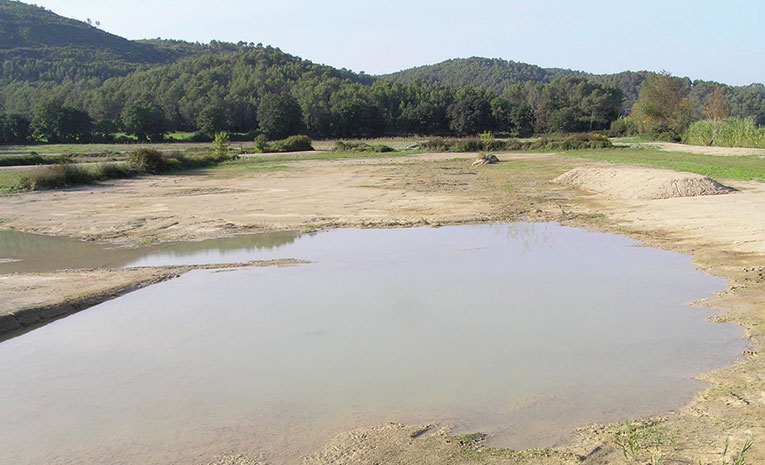 A view of the lake of Can Morgat, in El Pla de l’estany, a month after the first inundation (October 2006), at the beginning of the first spring with water (February 2007) and in a different year (May 2008). The aspect of the pond changed a lot in less than two years, thanks primarily to vegetation, and it looks practically like a natural lake now.
© A. Ruhí 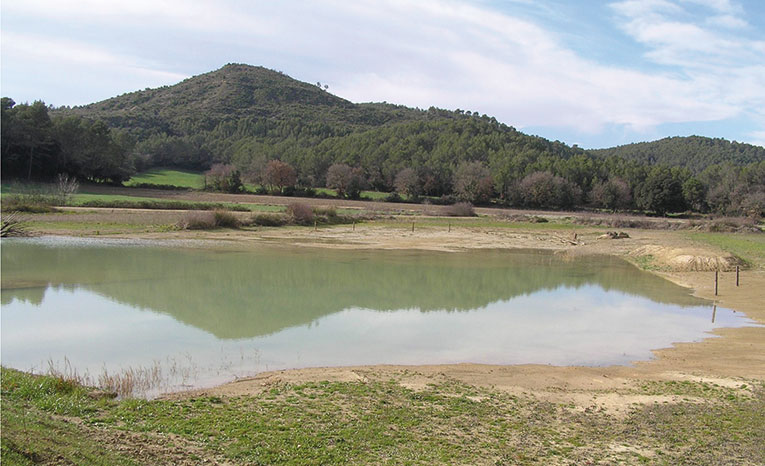 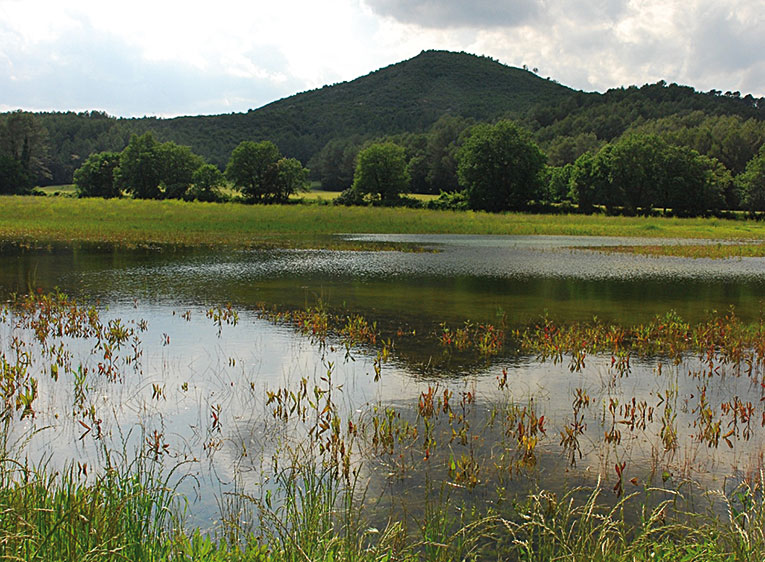 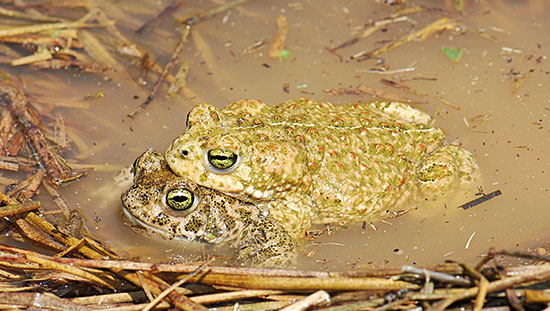 Amphibians soon discover and take advantage of these environments. The natterjack toad (Bufo calamita) bred in many of the studied areas in the first spring after the flooding. In the picture, two toads in amplexus.
© A. Ruhí 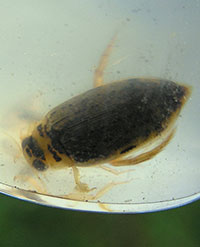 Aquatic beetles are aerial colonisers, and they are particularly efficient in looking for new habitats. The species in the picture (Eretes griseus) was found in many studied areas, a few months after the first inundation.
© A. Ruhí 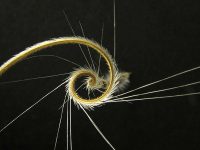