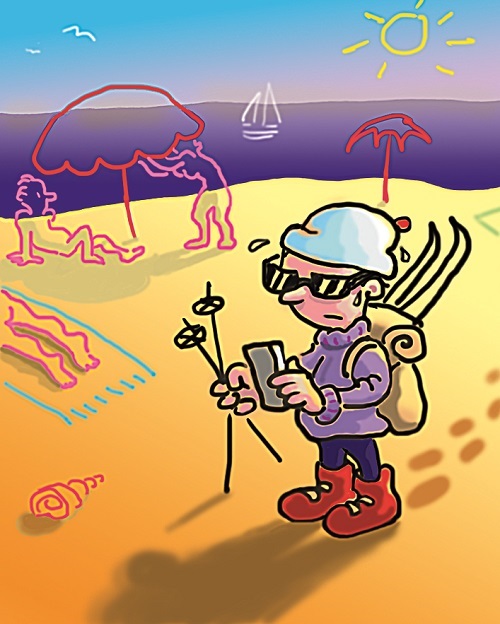 Years ago, I just wanted a phone, but I had to buy a PDA. When I had to change it, the agent broke out laughing: «Oh, you mean a smartphone, my friend…!» I just wanted to make phone calls, but I had to buy a gadget that could do almost anything. I must admit it works really well, although half of its options lie beyond my interests. The question here is: why do we call this practical contraption smart?

My thingy is not smart. Versatile and fast, yes; intelligent, not at all. It controls a lot of routines and no reasoning. That is not intelligence. The same thing could be said about a lot half-virtues predominant among trendy, flashy executives who take over our destinies. They feel comforted by how far reaching their ignorance is. It is so moving to watch them explain a crisis they do not understand. And, on top of that, one that they caused. They explain the consequences of their foolishness thinking they will enlighten our lives. They fiddle around with their last-generation smart thingamajigs, convinced they dazzle us with their virtual keys. They rather create distress.

Besides smartphones, there are also smart cities. No one ever saw one, but surely they exist… somewhere. I myself have been part of congresses dealing with them. I expressed a lot of doubts on the subject, and they were applauded (not solved, though) by other speakers who had not an iota (of doubt). We have all reached the corresponding Speculation Palaces, across the corresponding crazy cities of the real world, and yet, we told each other imaginary wonders about non-existent metropolis. Our smartphones and their supercalifragilistic juggling apps helped us make augmented reality presentations about decreased truths. If instead of gesturally smart we tried to be effectively intelligent, the situation would improve. Sensors, networks, processors and cybernetic clouds offer us a fascinating array of possibilities, but only if we know where we want to go. There is nothing easier and more absurd than getting lost with a GPS in your hands. The more potent the tool, the more vigorous the hand needs to be.

«If instead of gesturally smart we tried to be effectively intelligent, the situation would improve»

Sensibly, the concept of easy city is spreading. It is only of relative importance whether the city is superficially smart or truly, veritably smart. Whether or not it tends to be easy or friendly, that really is important. All that can be said in less trendy terms, but it loses its charm. If you can have a friendly city, why would you want a simply nice city? Some words look cooler than others, of course. «If they understand what we say, how will we maintain our authority?», a scholar from the Complutense University explained years ago.

The fact remains that the nice city is within our reach, if we know how to project it. New technologies help us do it, which is the opposite of saving us from doing it. This distinction is capital. Smart does not mean automatic. Urban friendliness emerges from an intelligent project implemented with resolve, not from a reflex automatism. Let’s look at energy. Monitored and remote-controlled systems proliferate, and they toss information incessantly without triggering any corrective action. The report, but they do not learn. Or they do not know how to learn, which is actually worse. There are flickering lights and nothing else. They are informed about whatever is happening, but they are not intelligent at all. And even less nice, obviously.

Future aspires to kindness; or to friendliness, it does not matter. That happens with cities, with phones and with human interaction. Do you remember Maxwell Smart, that funny yet incompetent detective, loaded with gadgets, who made the audience laugh in the sixties and seventies? Well, that’s it.