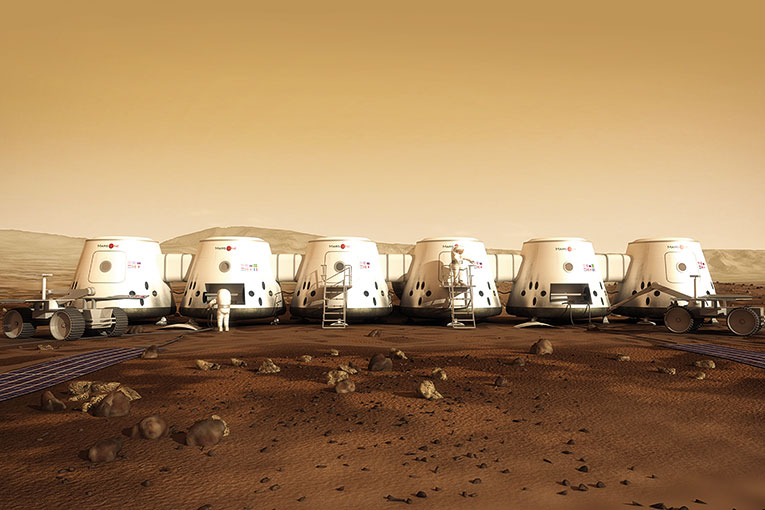 Martian settlement envisioned by Mars One. The successive modules will land (with very good aim) next to one another, and will house four people each. / MarsOne

You will have probably heard about the Mars One project, a Dutch private initiative that aims to establish a permanent settlement on Mars. The news has had a strong impact and aroused the interest of the mainstream media. It is no wonder that it is supported by a Nobel Prize in Physics, Dutchman Gerard ‘t Hooft. For those unfamiliar with this striking proposal, I will summarise it here: Mars One is a project by the Dutch foundation of the same name, which intends to send four people to Mars within ten years, the first group of settlers. After them, every two years (close approaches between the Earth and Mars occur approximately every two years) new groups of four settlers would be sent, so that by 2033 there would be a total of 24 people who would form the final Martian settlement. However, the flights would be one way. The settlers would spend the rest of their lives there.

«If one wishes to embark on the adventure of establishing an extraterrestrial settlement, it is more logical to start at the Moon. But Mars outsells the Moon, and that is what this is about, selling»

Note that I’m using the conditional tense at all times. And this is because the whole thing smells really fishy and seems to be a huge scam (by the way, when I told my barber about it, he became really surprised and replied with an irrefutable argument: «No way, it was on the news!!»). To begin with, the enrolment process costs money. If you want to register as a future settler in the Mars One website, you are eventually asked to pay $26 to complete the registration (this is the price for Spaniards, there is a different price for each country in function of their GDP, ranging from 5 to 50 dollars). It can be argued that it is to prevent people from signing up «as a joke» and so that only those who really want to go enrol. But in two weeks, since the registration period opened, 80,000 people have already signed up worldwide, at an average price of $25 per registration, totalling two million dollars (that is, a million per week). The registration period will last 19 weeks, and aims to reach half a million requests. Do the sum.

Moreover, one of the cofounders of Mars One is Paul Romer, creator of the Dutch version of Big Brother. In fact, as shown in the website, the entire programme will be a space Big Brother, where the daily tests to select astronauts will be broadcasted daily, as well as their life together, their disputes…There is actually no academic or professional qualification for election, and this already indicates what type of programme we can expect. These candidates (which include 13 Spaniards as of now) will be subjected this year to a first selection round, facing really hard tests to check their ability. 40 people will be selected at the end of 2013, who will pass to the second round, even harder, after which the 24 Martian settlers will be selected. Everything will be broadcasted in a reality show that will finance the costs of the trip, they say. And, without a doubt, they will raise a lot of money. 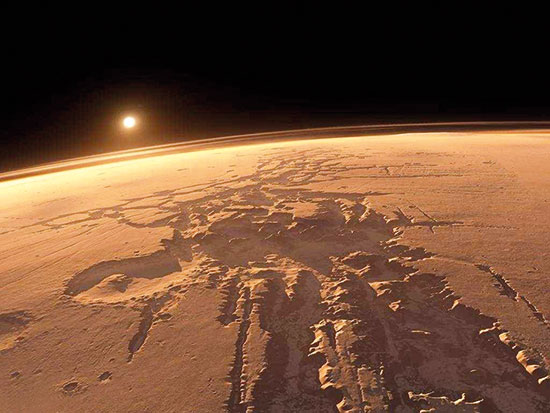 Martian Landscape with Valles Marineris in the foreground and the Noctis Labyrinthus in the background.

But, after that, will there be a space travel? I really doubt it. For starters, it makes little sense to start the cart before the horse. If one wishes to embark on the adventure of establishing an extraterrestrial settlement, it is more logical to start at the Moon. It is a good place to test the technology needed for a permanent settlement, as it has good radio communication with Earth (no delays, you could talk to your friends and family in real time), there is no need for a two year waiting period for a launch window, and it is much easier to send settlers any material (or fuel, or food) they may need. Even a return trip, if necessary, would be much easier. But no, Mars outsells the Moon, and that’s what this is about, selling.

On the website of Mars One the feasibility of the trip is defended: «It is feasible both economically and logistically, thanks to the suppliers and experts in space exploration that already exist.» That is, Mars One is not developing either rockets, ships or space suits. They intend to acquire everything from third parties.

But to go to the Moon, the Apollo missions required a huge launch vehicle, the 3,000-ton Saturn V. Not only does the rocket need to reach its goal, it also needs to take off slowly, using low accelerations not to crush the astronauts, and that requires spending a lot of fuel. Of course, there is no rocket today similar to Saturn V, although a pumped-up version of the European rocket Ariane 5, the Ariane M, could play the role. However, the Ariane M is currently only in the blueprints, because the cost is prohibitive. NASA has also proposed its candidate, the SLS, which comes in five versions, the lightest of which is already beginning to be developed as a substitute for space shuttles. The heaviest SLS model could carry up to 10 tons to Mars (including the weight of the capsule in which the astronauts are travelling).

Nevertheless, even if the Mars One project could use that launcher, it could perhaps carry astronauts, but not the extra weight of the modular homes, the solar panels (of which they intend to lay 3,000 m2), the surface vehicle, the communications systems, the recycling systems, the tools… everything needed to establish a permanent settlement for 24 people, which would add several hundred tons of material that would have to be transported to Mars. If we sum water, oxygen and food, we can easily exceed one thousand tons.

Not to mention other minor problems, such as spare parts (the life span of a solar panel is 25 years and they are among the most durable parts), the high doses of radiation to which the settlers would be continually exposed (Mars does not have a magnetic field as strong as the Earth’s to shield against the charged particles emitted by the Sun) or the sources of protein for the settlers, once they have run out of food. But of course, the first step is to have a rocket to go to Mars, which I doubt they do.

Frankly, I’d love to be wrong. As I have said before, I believe that human planetary exploration will only take off when it becomes a business. But I think this case is just a scam.